JRR Tolkien's 'Father Christmas Letters' Content from the guide to life, the universe and everything 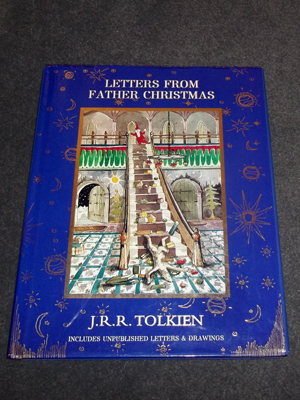 JRR Tolkien will always be remembered as the author of The Hobbit and The Lord of the Rings. Yet he was also a father, and between 1920 and 1943 every year he would write letters for his children, lovingly and lavishly illustrated, claiming to be from the North Pole and from Father Christmas himself.

JRR Tolkien died in 1973 and in 1976 his children published these letters for the first time. They have been regularly republished since. In many ways the letters are the ultimate expression of genius, artistic talent and paternal love.

The first letter arrived in 1920 and was addressed to JRR Tolkien's oldest son John Francis Reuel Tolkien, who was then three years old. It was a short, simple letter with pictures that showed Father Christmas trudging in the snow carrying toys, as well as his house. Father Christmas has very shaky handwriting, reflecting the fact that the weather is cold and that he is over 1,900 years old, or 'lots older than your great-grandfather' as he puts it. Like other letters, it came in an envelope with a North Pole stamp, where postage is charged in kisses. The early North Pole stamps show the actual North Pole as a shining, white tower.

By 1923 the letters are also addressed to John's brother Michael Henry. The 1923 letter mentions that they received Lotts Bricks for Christmas. In 1924 John and Michael were given the ultimate in boys' toys: a model railway set, with an 'engine' and 'station and things' specifically mentioned in that year's letter. In the 1930s toys mentioned included tin soldiers, books and balloons.

This letter also includes a short message from the North Polar Bear, who signs the letter as 'Great (Polar) Bear'. He is revealed to have very thick, plain handwriting because he finds it difficult to hold a pen in his paws.

The following year the North Polar Bear has caused mischief again, setting off the biggest firework explosion ever. Father Christmas writes that the Northern Lights or Aurora Borealis are actually fireworks that he creates and calls the 'Rory Bory Aylis fireworks'. The North Polar Bear, however, set off two years' worth in one go which shook the stars out of place, broke the moon in four and made the Man in the Moon fall into his garden. It is this 1927 letter that sets the standard for all that follow. From this moment on there is a delightful degree of banter in the letters, with the North Polar Bear annotating and commenting on what Father Christmas has written and writing his own messages at the end.

Of course Tolkien being Tolkien, it wasn't long before his love of language influenced these letters. In 1929 it is revealed that they don't speak English in the North Pole, but instead use Arctic2, where V is written for U and 'Goodbye till I see you next and I hope it will be soon' is written as 'Mára mesta an ni véla tye ento, ya rato nea.'

From 1930 the Tolkien family's beloved toys or pets are also mentioned in the letters. By Christmas 1931, Tolkien's daughter Priscilla Mary Anne Reuel Tolkien had been born. This coincided with the Great Polar Bear also having an extended family; he had become a much more sensible and dependable character and so his young nephews were introduced to be the troublemakers. The last letters would be addressed to Priscilla alone - the very last was dated 1943.

In the early 1930s Father Christmas faced a new, resolute enemy: goblins. In 1932 the North Polar Bear accidentally fell down a hole and found himself in a goblin cave, only to be led astray and become lost. The goblin caverns are an eerie place, decorated with Black Magic runes. The goblins had been tunnelling and raiding Father Christmas' toy cellars, stealing the Hornby model railway toys! Having an aversion to the colour green, they were driven away by green smoke and captured by Red Gnomes.

In 1933 the North Polar Bear took to sleeping in the kitchen in order to stand guard. Soon after, goblins riding bats broke into Father Christmas' house and a thousand goblins invaded, setting the stores on fire, capturing many gnomes, breaking the stables and fleeing with the reindeer. Father Christmas was able to use his horn to summon his allies, but it took a fortnight of fighting before the North Pole was saved.

In 1940, 50 penguins arrived at the North Pole. Described by Father Christmas as 'evacuees', they had swum all the way from the South Pole in order to aid Father Christmas against further goblin incursions. In autumn 1941 the North Pole was again besieged. The goblins felt that the war in the south would allow them to recapture the north, so they had built a large tunnel through which they swarmed in their thousands.

As well as Father Christmas, the letters contain numerous other characters.

Mischievous or clumsy assistant, who does much of the packing of presents. He tends to inadvertently cause mischief, by breaking the North Pole, setting off all the fireworks in one go or falling on top of presents after falling down the stairs. In 1929 he reveals his name is Karhu.

Father Christmas' gardener, although only snowdrops and frost-ferns will grow. Being an actual snowman, he writes in white with his finger, but only writes on envelopes. Unfortunately the Snow Man [sic] doesn't last long; in 1927 the North Polar Bear accidentally pushes him over the edge of the cliff and he breaks into lots of little pieces, and is used to make a white picture.

The Man in the Moon is very fond of chocolate, plum pudding and brandy, and keeps the stars tidy. He can come down to Earth but should never spend a whole night away from the moon. He likes to play Snapdragons, a parlour game traditionally played at Christmas in which raisins are placed in a bowl of burning brandy, the idea of which is to eat the raisins without being burnt.

The North Polar Bear's cousin who is a constellation that provides some light to help Father Christmas pack presents when the sun is not seen for three months.

In 1929 we are told how Snow-elves like to let off rockets and have a bonfire to celebrate 'the coming in of winter'. 'Elves' are mentioned in 1934, 'Red Elves' in 1935 and, additionally, 'Green Elves' in 1936. It is in 1936 that both Red and Green elves move to live permanently at Cliff House to be trained in the packing business to help Father Christmas.

Snow-boys are sons of snowmen. In 1937 it is revealed they enjoy tobogganing.

In 1930 the Snowman [sic] is his gardener and is definitely not a man made out of snow.

The Great Polar Bear's nephews first come to visit their uncle in 1931 and stay for good. Their names mean 'fat' and 'white-hair'. They are very mischievous.

Eldest of the few surviving cave bears, he lives in a cave near the North Pole. In 1934 his nephews the Cave Cubs first appear, but Paksu and Valkotukka don't get on with them.

First mentioned on an envelope as being Gnome Carriers, these are Father Christmas' assistants and the goblins' enemies. How or whether they differ from the Snow-elves is unclear. There are Red Gnomes and Gnome-ladies.

Pests like clever rats, they have their own 'nasty' written language which has something to do with Black Magic. Troublemakers, they invaded the North Pole in 14533 and used to ride on drasils, described as 'a very queer sort of dwarf "dachshund" horse creature'. They are particularly fond of model railways. Some goblins ride bats.

Elf secretary to Father Christmas who can write using various alphabets including Arctic, English, Greek, Russian, Runes and Elvish. His handwriting is spindly.

Other characters briefly mentioned include Father Christmas' Green Brother, Snowbabies and the Great Seal who lives beneath the ice. In midsummer when a lot of the North Pole's ice melts, seals can come out and visit. Curiously, the reindeer do not play a prominent role in the letters.

What we Learn about Tolkien's Father Christmas

Father Christmas and The Lord of the Rings

Many have speculated whether the character of Father Christmas influenced Tolkien's most famous creation, the wizard  Gandalf. As well as the long beards and longer life span, the two have much in common. Both Father Christmas and Gandalf are well known for their fireworks.

Dragons are mentioned as being a nuisance in 1927's letter, just as they are in The Hobbit. The goblins in both stories have sinister connections with Black Magic and live underground, building tunnels.

When besieged, Father Christmas blew three blasts on Windbeam, his great horn, to summon help, just as Boromir in The Lord of the Rings summoned help with his horn.

1Father Christmas says the name 'Christopher' 'is rather like mine'.2The North Polar Bear spells this as both 'Arktik' and 'Arctick'.3Coincidentally the date of the fall of the Byzantine Empire and considered by historians to be the start of the Modern Period.4Presumably his trip home is just a quick break to pick up another sack of presents before he heads out again to Southern France and the rest of the world, including the United States. Of course, some areas of the World do not receive gifts from Father Christmas: for example in Spain presents are delivered by the Three Kings on the 6th of January.