Man v Cactus: The Saga of David M Grundman Content from the guide to life, the universe and everything 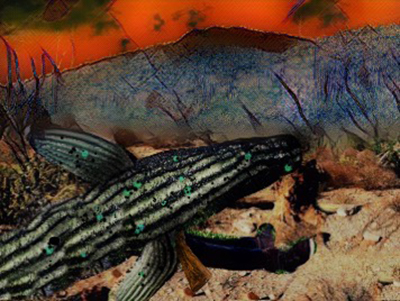 Thoughtless human activity does a lot of harm to the biosphere. Often, the results of human misbehaviour only show up after decades, even centuries, of abuse: global warming, habitat loss and vicious over-hunting eventually lead to massive damage to ecosystems. The initial abusers aren't usually around to feel the effects of their bad planning.

At least once, though, an eco-vandal got what he deserved. 21st-Century observers might call it 'instant karma'. Alcohol and firearms were involved, but the cactus in question was unarmed. The vast majority of people who've heard or read this story in the last 30-odd years have more or less cheered this act of what the Weekly World News called 'plant justice'. Appropriately enough, this showdown took place in the southwestern US.

Before we tell you about David M Grundman's duel with the cactus, let's talk about the saguaro.

For the Tohono O'odham, the saguaro cactus is an honored relative. The towering cactus provides for the physical and spiritual sustenance of the people.
- Tohono O'odham Community Website

The Saguaro cactus, Carnegiea gigantea, is a familiar sight to fans of Western films. It's the towering, straight cactus with the upraised arms. You'll see it in the Texas sagebrush – but only in the movies. In real life, the saguaro grows only in the Sonoran Desert. This 260,000-km2 desert straddles the artificial human border between Mexico and the Southwest United States, so that it's part of California, Arizona and Mexico. The Sonoran Desert is hot and dry, but forms a rich ecosystem. Saguaro National Park in the US boasts lively plant diversity, including, of course, the saguaro.

The Tohono O'odham Nation hold an annual ceremony in honour of the saguaro cactus, which provides food in the form of a sweet, bright red fruit. Harvesting the fruits from a saguaro isn't easy: you need a long pole. The saguaro usually grows to about 12.2m in height. It takes a saguaro a long time to get that tall.

The saguaro cactus grows slowly. It takes at least 75 years before it begins to grow the arms that give it that distinctive silhouette. The plant whose story we're about to tell most likely sprouted around 1857. At the time of our story, it was about 125 years old and weighed more than a tonne. It was a stately life form, and it deserved better than what happened to it.

The Tale of David M Grundman

When David Michael Grundman was born in upstate New York, the saguaro cactus in our story was already a century old. When Grundman himself was in his twenties, he ended up in prison for armed robbery. He had taken cash from a would-be marijuana purchaser at gunpoint. Paroled from Attica, he moved to Phoenix, Arizona, to live with his mother. On a February day in 1982, he skipped work at the Sun Kountry Kitchen restaurant. Instead, he and his friend Jim Suchochi headed out into the Sonoran Desert for a day of loafing. In their pickup truck, they took a large quantity of beer, rifles and ammunition, and a dog.

After becoming thoroughly drunk, and seeing nothing else to shoot at, game being scarce and shy, Grundman began firing at one saguaro cactus after another. This form of activity is known as 'cactus plugging', and it is illegal. In fact, Western states like Arizona have law enforcement officers whose sole job is to prevent the poaching or malicious destruction of valuable cactus plants. Unfortunately, there were no 'cactus cops' around on this day.

The first cactus Grundman hit was relatively small, and fell down easily. Encouraged, he chose larger targets. Then he attacked the stately giant, at least eight meters in height. He poured bullets into it, but the cactus didn't fall. He staggered up to it, intending to give it a push.

That's when the cactus struck. First, a 200kg+ arm fell, throwing the drunken shootist to the ground. Then the ancient body collapsed on top of Grundman. He was dead almost instantly, his chest crushed beneath the weight of the massive plant. The park manager came in response to the friend's emergency call. According to the manager, there was blood on the cactus – the result of falling spines piercing Grundman's mouth and gums.

Another Western legend was born, but this one was true. Since 1982, it has been necessary for folklorists such as Jan Harold Brunvand to research the incident just to determine that it was not, in fact, an urban legend. The ever-reliable Snopes.com also has an entry under 'Horrors'. Local historians routinely trot out the tale during slow news cycles. The saguaro story is both edifying and satisfying to those who love the Earth.

Well, the giant cactus trembled and came that roaring sound.
The mighty arm of justice came hurling toward the ground.
- 'Saguaro' by the Austin Lounge Lizards, from their album Creatures from the Black Saloon

Want more information about cactus-related incidents in the New West? We recommend this excellent article from the Phoenix New Times of 3 March, 1993, entitled 'When Cactus and Civilization Collide: Trifling with Saguaros Can Be Hazardous to One's Health'.

And yes, David M Grundman was a Darwin Award recipient for 1982.