The Passenger Pigeon Content from the guide to life, the universe and everything 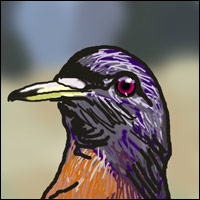 It was a great, memorable day when the first flock of passenger pigeons came to our farm, calling to mind the story we had read about them when we were at school in Scotland. Of all God's feathered people that sailed the Wisconsin sky, no other bird seemed to us so wonderful.
- John Muir, The Story of My Boyhood and Youth.

It's a little strange that the two most famous bird species to be hunted to extinction were both members of the pigeon family. The most famous, of course, is the dodo, hunted to extinction in around 1681 by Dutch and Portuguese explorers. While the dodo inhabited an island just a tenth the size of Wales1- with the passenger pigeon Ectopistes migratorius, we were into a whole new ball game.

When Christopher Columbus landed in the Americas, there is little doubt that the passenger pigeon was the world's most populous bird, and there has probably never been a bird that existed in such great numbers. The first population estimates were in the early 19th Century; the great naturalist John James Audubon estimated a single flock in 1813 to contain a billion birds, and a flock in Ontario 53 years later took 14 hours to pass a fixed point - modern estimates put the figure in this second flock at around 3.5 billion individuals.

It is believed that there may once have been six billion passenger pigeons in North America, representing anything up to 40% of the total bird population.

Being so numerous, and not used to being hunted, passenger pigeons were a common sight on American dinner tables; especially among the poor, servants and slaves, who rarely ate much else in some parts of the country. They were named by French settlers as 'pigeon de passage', as a reference to their impressive travelling feats; the genus Ectopistes is Greek for 'wanderer', and the species name migratorius Latin for 'migratory'. Their enormous flocks moved like a great rolling ball; the front birds landing to pick the ground clean of any nuts, fruits and berries they could find. The next would land a little further on, and when the final birds eventually flew over, the ones that had landed first would once again take to the air. They would roost in the same place for a few weeks at a time, often hundreds in a tree, frequently breaking boughs with the sheer weight of their numbers and dung 'several inches thick covering the ground', according to Audubon.

They could fly at up to 60 miles per hour for hours at a time, and their feeding grounds covered the whole continent. In the summer, they fed on beechnuts, cranberries and huckleberries in the north; flying gradually south for the autumn fruits.

Huge flocks of placid, tasty birds with fairly predictable behaviour were too much for Americans to resist.

As well as being hunted for food, the easy supply of meat was perfect for feeding hogs, sometimes whole herds being driven for a hundred miles in anticipation of a pigeon slaughter. They were also occasionally used to produce fertiliser and for trap shooting, but these were fairly insignificant factors in their demise.

Just after sundown, the hunters would be waiting at the roost armed with long poles and guns. The pigeons would fly in and spend the night being shot at and knocked out of trees, tree-boughs would fall bringing yet more birds crashing to the ground in absolute chaos. Fires were lit to suffocate the birds as they roosted. The men wouldn't even pick up the dead and dying birds, who would literally fall in their thousands every night. Just before dawn the birds would start to fly off to begin the day's feeding:

Then the authors of this devastation began their entry amongst the dead, the dying and mangled. The pigeons were picked up and piled in heaps until each had as many as they could possibly dispose of, when the hogs were let loose to feed on the remainder.
- John James Audubon, Birds Of America.

Workers would then spend the day in the area of the roost, plucking and salting the carcasses to be shipped to the East Coast. At one time, New York took delivery of 100 barrels a day, each containing 5-600 birds, and in 1869 Ven Buren County in Michigan sent 7,500,000 eastwards.

Around breeding roosts, there was even more devastation:

I saw one nesting place in Wisconsin one hundred miles long and from three to ten miles wide. Every tree, some of them low and quite scrubby, had from one to fifty nests on each. Some of the nests overflow from the oaks to the hemlock and pine woods. When the pigeon hunters attack the breeding-places they sometimes cut the timber from thousands of places. Millions are caught in nets with salt or grain for bait, and schooners, sometimes loaded down with the birds, are taken to New York where they are sold for a cent apiece.
- Chief Simon Pokagon, Native American writer.

With each bird laying just one egg a year, the population never had a hope of even a mild recovery. Deforestation also played a part; with less woodland to feed in, the birds fed on crops as well, making enemies of farmers.

Hunting became even more efficient with the use of the telegraph, allowing the birds to be tracked more easily and information to be relayed to hunters quickly. By 1896, there was just one flock of 250,000 birds left in the whole continent. When word got around that they were nesting in the Great Lakes area, there was no stopping the hunters. Somewhat callously, as they knew perfectly well that this was the last wild flock, sport hunters went out and shot the lot.

A few individuals lingered on into the first months of the 20th Century. In 1900 the final wild bird was shot by a 14 year-old farmboy in Ohio, who apparently saw it eating his corn. It was stuffed, named 'Buttons' (its embalmer used them for eyes) and sent to the Ohio Historical Society in Columbus, where it is still on display today.

At 1pm on 1 September, 1914, 29 year-old Martha fell off her perch in Cincinatti Zoo and expired. She was the last of the passenger pigeons. The pagoda she spent her last years in has been restored and is now a monument to poor old Ectopistes migratorius, and is home to 'Incus', who died in the same zoo four years later - the last of the Carolina Parakeets. Martha's body was frozen in ice and sent to the Smithsonian Institution in Washington DC. She is no longer on public display.

You can see what a passenger pigeon would have looked like on the Chipper Woods Observatory website.

It took us 70 years to clear Mauritius of what was probably a few thousand dodos. To wipe out six billion birds in little over a century - that's over 150,000 birds a day - from an entire continent must rank as some kind of achievement, however grotesque.

The pigeon was a biological storm. He was the lightning that played between two opposing potentials of intolerable intensity: the fat of the land and the oxygen of the air. Yearly the feathered tempest roared up, down and across the continent, sucking up the laden fruits of forest and prairie, burning them in a traveling blast of life.
- Aldo Leopold, On A Monument to the Passenger Pigeon.

1It is standard to compare all islands to the size of Wales.