'The Good Old Days' Content from the guide to life, the universe and everything 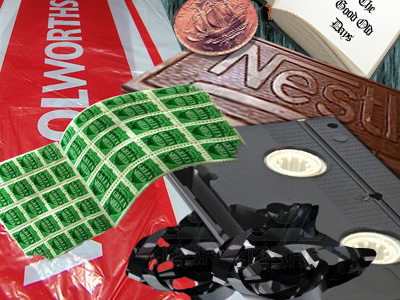 For many Researchers, 'The Good Old Days' hark back to things that they remember in their lifetime. Items that were available to buy are a popular theme:

Know what I miss about my good old days? Cleaning products that actually clean!

Chocolate bars that were a proper size!

You could get an ice cream cone for ten cents.

In the Good Old Days Woolworths sold everything. Still miss Woolworths – used to do all my Christmas shopping there.

The good old days, IMO, is when house prices had some kind of basis in reality and real-world monetary income for actual people, and likewise, when a pint of beer, in a pub, wasn't the same as a quarter our joint weekly expenditure on food.

Children making their own pleasures with little or no technology needed.

Proper school uniforms, and walking to school unaccompanied (which in my case was about a mile).

Transport was mentioned, from driving:

I think of the good old days when every driver used their indicators and gave way to other drivers, politeness was the unspoken rule of the road. Now it is just rudeness, cut-you-up, turn without indicating, ooh I got a phone call which can't wait!!! You have to be a mind-reader and have your wits about you all the time!

to 'letting the train take the strain'.

Services in general are other things that have changed over time:

When public services were run for the public and not for profit.

In the Good Old Days towns had banks. My hometown of Sandown had a Nat West, Midlands, Lloyds, Barclays and a Halifax Building Society and now all but Lloyds has closed, with the Lloyds shutting their doors for good in 2017. And when you went into the bank to pay in your cheque you were allowed to queue up unhindered, without someone trying to fob you off to a machine at ankle height whose buttons have all been worn away. Instead you were allowed to queue and there'd be lots of windows – each containing someone serving you – and once you paid your cheque in, your book would be stamped. STAMP! STAMP! None of this lousy 'receipt printed in near-invisible ink on toilet paper rejects' rubbish.

And you used to get stamps in books taken out the library too.

We had Green Shield stamps too - remember those? I'm not convinced it was really worth licking a couple of square miles of gummed paper to exchange for some plastic tat at Littlewoods, but, hey, they were the good old days.

There were definitely more stamps in the good old days... as well as more little, quirky shops.

Shops! Yes! We used to have shops in the good old days, I'd forgotten that! - now we only have cafés and food outlets in the city; you can't actually buy 'stuff' in shops any more - hence the continual stream of delivery people bringing Amazon packages to the door.

Entertainment is something people think of, too.

Music that was distinctive, original, unique, tuneful - I'm afraid that most of the stuff on the radio today all sounds the same - too much computer and auto-tune, not enough musicianship. When an original song comes along it's so unusual that they play it incessantly.

The good old days may be very personal:

Personally... the good old days, was any time before my body got so damn broken and useless.

And sometimes 'The Good Old Days' refers to a very specific period of time:

At work it is clearly understood that the 'good old days' means 'before the current VC took over and restructured everything 18 months ago'.

The good old days may be identified when comparing and contrasting activities of the past and present. Going to the cinema was considered:

Where I grew up there were two cinemas. One (The Odeon) closed - I think it had already closed when I left in 1976 - and eventually became a night club with a very bad reputation. The other one, the Kingsway, the only one I ever went to, is now a building materials outlet.

We are lucky now in having an independent cinema 20 minutes in the one direction, and another, bigger one which shows films in the original English, 40 minutes by car in the other direction - also accessible by tram practically from door to door. Neither shows ads.

As was new technology in relation to home entertainment.

In the good old days, we had videos and you could buy or record almost anything. The picture quality wasn't perfect and they had to be rewound, but you could easily fast-forward the trailers at the start.

Nowadays you can watch things online. The sound is always out of sync with the picture, the picture quality is often abysmal and pixelating, the film pauses and buffers at the good bits, you have to watch the adverts at the start and half the time the whole thing crashes and you have to restart everything and then watch the film again from the beginning.

I feel your pain! Digital replay of audio and video (separately or together) is absolutely wonderful when it works well. But even with the best, most stable Internet connection, there will be times of outage, reduced speed or a local issue with your router or your device is doing updates, crashes or something else random. And of course this usually happens when you're totally in the mood for nothing else except a binge of Netflix/Internet radio/whatever.

Trouble is, with this method of replay, your entertainment fix is in the hands of others and there are so many links in the chain that can go wrong. At least with an old VHS machine or analogue/non-streamed music replay, you were pretty much guaranteed it would work unless two things went wrong: a power cut or the device failed. I could live with just these two rare possibilities interrupting my audio-visual entertainment, rather than the multitude of things that can and do go wrong now.

But a mixed approach is probably better:

I get most of my film watching done on DVD, as it's cheaper and you get all the DVD extras, but some films just have to be seen in the cinema (Gravity, for example).

The good old days may or may not exist:

I think that mostly when people talk about the good old days, they are recalling certain pleasant aspects of the past while forgetting the bad things.

The Good ol' days? I doubt there ever were good ol' days. Just different. As the saying goes, 'Things are more like they are now than they ever used to be'.

I seem to remember more of the unpleasant aspects like the power cuts, the General Strike, the winter of '67. However I do remember some things that I'd consider good.

No stupid health and safety rules for children so we could climb trees, make go-karts out of old pram bases and ride them on the road, make dens on old building sites, play on the swings, slides and umbrella roundabouts without the safety police shouting at us.

Getting into trouble and getting a cuff around the ear from the copper before being taken home and getting another cuff from my parents.

I miss the past. Affordable cinema is one thing, then there is the lack of crime and the ability to walk after dark and the collapse of the standards of public behaviour, everything from littering to obnoxious children. No nanny state telling us what to think and what to say what to do and what is dangerous. What is all this political correctness all about!

I think political correctness means people thinking about the impact of their words on other people - for example I don't miss the past where notorious comedians encouraged an audience to laugh at people who are different from them, but I do like comedians who invite the audience to laugh with them.

Many Researchers recognised that old days were not all good, although there were some good times too.

The 1950s and early 1960s were the good old days. Eisenhower was in the White House keeping everybody safe. Then JFK brought Camelot to the country, and only made two mistakes: Bay of Pigs, and riding in the open in Dallas without body armour (well, to an impressionable youth that's how it looked!)

The day I went for my draft physical (in 1970) was the worst day of my life. I was hassled on the subway. I lived in a rooming house, and somebody on my floor stole my food from the refrigerator.

For me, the 60s and half of the 70s weren't so good. But for me, I would say the late 70s were pretty good. I had very few true concerns. Uniform cleaned, pressed and presentable daily. My part of the defence of the country done as well as I could. And waking up somewhere that I recognized.

In fact, the Good Old Days are a matter of perspective:

But one Researcher had a very practical perspective:

To me, 'the good old days' was the title of a music hall programme broadcast by the BBC from The City Varieties theatre in Leeds in the 60s and 70s.