Choosing an Eyepiece for an Astronomical Telescope Content from the guide to life, the universe and everything 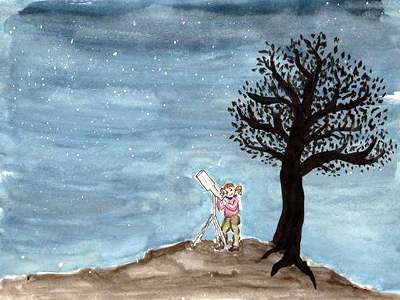 Astronomy, the study of the stars, planets and other objects in the night sky, is a science that can be enjoyed by amateurs with a minimum of equipment. Anyone with a clear view of the night sky can join in. There's quite a lot to see in the heavens with the naked eye or binoculars, but your enjoyment can be increased by getting an astronomical telescope. One of the puzzling features of such telescopes is that they come with a range of different eyepieces - it can be quite tricky picking the right eyepiece or deciding whether you will benefit from buying another one. This Entry attempts to make all this a bit clearer.

An astronomical telescope can be thought of as a tube with a big lens at one end and a small lens at the other. In fact, the big lens may be a curved mirror rather than a lens, and the lenses may have more than one piece of glass in them, but this can be ignored for most purposes.

When choosing an eyepiece, bear the following in mind:

Field of view - the apparent field of view is the size of the image when you look into an eyepiece. It ranges from about 30° to about 80° depending on the design of the eyepiece. A small field of view will mean that you see a small circular image surrounded by blackness. You might not see very many stars in it. With a large field of view, you'll see a much bigger image, so you'll be able to see more stars at the same time. Most lenses have an adequate field of view, so don't worry about it too much unless you read in reviews that it is too small.

Eye Relief - this is the distance between the front of the lens and your eye at the ideal viewing distance. If it is too small, your eyelashes will hit against the lens. If it's too big you may not be able to find the viewing point easily. Again, this is not likely to be an issue unless you read in reviews that there is a problem with a particular lens.

The Barlow lens is not an eyepiece. You slot it into the telescope and put a standard eyepiece into it. This has the effect of doubling the magnification while reducing the available light. This can be useful.

Zoom eyepieces have an adjustable focal length, so they can be used like the zoom in a camera. While this gives more flexibility, the extra glass needed to achieve this will reduce the light and therefore the clarity of the image slightly.

Moon filter - if you look at the Moon through a telescope you will be dazzled by the brightness of it. You won't be able to see any detail because your eye will be trying to close itself. You need a moon filter - a piece of grey glass that you attach to your eyepiece. It's like wearing moonglasses.

1An inch is defined as 25.4 millimetres.