Measuring Tolerance, How Wrong Can We Be? Content from the guide to life, the universe and everything 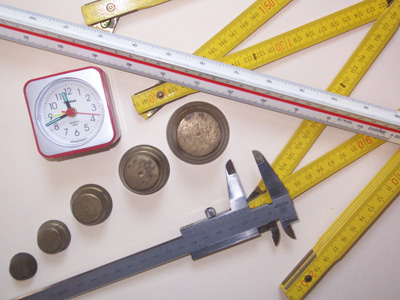 This is not an Entry about how to treat others with differing social, ethnic or political beliefs, although we encourage everyone to get along. This is an explanation of how the amount of error, or variance allowed depends on the circumstances.

A simple recipe may direct us to put a dish in a pre-heated oven for 30 minutes. Common sense tells us that a variation of a minute more or less will probably not matter, but if we miss by a quarter hour the meal is almost certain to be ruined. The number of minutes by which we can vary the cooking time without harm is the tolerance.

Another example is travelling in a car. An estimate of 30 kilometres can vary from the true distance without harm, unless we are low on petrol, or are depending on time and distance to locate a turn.

In manufacturing, tolerance usually concerns the length of cut pieces, the size of holes and the actual dimensions of raw material. A 50mm round bar will be slightly over or under the size named due to variations in the process of forming the stock. This variation will become more apparent depending on how precisely you measure. The thickness of the average human hair is about 0.13mm. In some machine shop operations, such as machining the moving parts of an internal combustion engine, this distance is huge.

Consider the simple act of putting a round peg into a round hole. Sounds easy, certainly the hole must be larger than the peg – well actually this is not always the case. There are situations where you want a peg that can be driven into the hole and not come out. This is known as an interference fit and requires a fairly high tolerance for both the peg and the hole. In some cases the peg may be driven in with light taps of a hammer, in other uses installing the peg may require a press with many tonnes of pressure.

In other situations we may want the peg to slide easily through the hole. In this case the hole will be larger than the peg. How much larger, and what clearance is allowable, is another design consideration. For a bolt hole, a clearance of 2mm or more may be fine. In other uses, such as the valve stem of an engine, it must be much smaller to assure proper alignment.

In larger projects such as a bridge or office building, a tolerance of 5cm or more may be acceptable, but there is always a tolerance that must not be exceeded.

When cutting with a saw it is important to remember that the material under the blade will be lost; this is known as the saw's 'kerf'. After marking the length needed you must set the whole blade on the waste side of the cut. When purchasing material from which several pieces will be cut, the kerf width must be added to the length of each cut to determine how many pieces can be cut from a single piece of stock. You cannot cut 10 pieces each 10cm long from 100cm of stock, no matter how hard you try.

The Price of Tolerance

Why not just build everything to a high tolerance and do away with sloppy work? Tolerances are expensive! Picture a man cutting 50 pieces to the same length. He will carefully measure the distance, set a block at the required distance and start cutting, checking the length of the first few pieces to make sure all is correct. At some point while he is working a small chip could get stuck to the block making the next several pieces say 2mm shorter. If we require a tolerance of only +/- 1mm not only do we have to cut new pieces but the ones already cut have become scrap.

Although all pieces within the tolerance range are considered acceptable, the closer to the desired dimension the better the finished product will perform. This is part of the reason why products from certain areas or countries become preferred – Swiss watches and Bavarian cars come to mind. The workers there take great pride in accurate work. But again the greater accuracy takes more time, and time is one of the greatest costs in producing a product.

Truly precision work such a watch-making requires skilled experts and very expensive tools. We will not even consider modern computers which frequently involve components too small to be seen by the unaided human eye.

Interchangeable parts were first widely used by Samuel Colt in the mid-19th Century, although Eli Whitney1 had worked with the concept a few decades earlier in producing identical musket locks. The idea is that a fairly unskilled worker could take identical parts from a dozen or so bins, assemble them, and produce a functional firearm. Although the parts must obviously be produced to a fairly high tolerance to fit together, this is a totally separate subject. The components of a 'one-off' project must carry the same care of fitting together as a mass-produced item to assure reliable service.

What Happens if Tolerances are not Met?

Hopefully it will be caught by an inspector and the part not used. Sometimes a defective item may slip through and be used in the finished product and result in a recall of several items. This link is only an example and is not meant to single out a specific company or product. Thousands of similar recalls are made each year.

In another example of how parts can be produced with tolerance errors, two men were employed to layout the support fittings on several tube wall sections for a large commercial boiler. Each section was about 40 feet (12.2m) tall and 8 feet (2.4m) wide, and required a number of fittings to be located at several places along its length. When the panels arrived at the job site, every fitting was found to be almost exactly 1 inch (over 2.5cm) below all the mating pieces. On investigating it was found that the two men who laid out the panels both had long and successful experience in layout, but had not worked with each other. The man who held the 'dumb end' of the tape, the end that is measured from, had been taught to always hold the 1 inch mark at the zero point as this was more accurate. Over time, the very end of the tape can wear down and accuracy lost. The man at the other end who was reading the length measurement and marking the panels had never heard of this practice. The two men were each so sure that everyone did it 'their way' they did not think about mentioning the method to the other. All the fittings were welded to the incorrect marks and shipped to the power plant. When the erector in the field tried to slide the required bars through the fittings of all the panels, he found the error was far in excess of the required tolerance. Because of the steam pressure carried in the tubes, another standard stated that all welds must be at least six inches apart. The final solution was to cut seven inches from the top of the panel and six inches from the bottom, the ends switched and re-welded to the panel. This cost the company several thousands of dollars in labour, and even more importantly, several days of construction time.

The Tolerance of Wear and Tear

Tolerance is not only a concern in manufacturing. As machines work, parts slide against each other and are subject to wear. After a certain amount of use the part is worn away to the point where it is no longer fit for service. When replacing the brakes on your car the mechanic will always measure the inside diameter of the brake drums or the thickness of the rotor on disk brakes. If too much metal has been worn away they must be replaced.

In the world of the machine shop it is not about being right, only knowing how right you have to be. There is an old saying that you should measure twice, so you only have to cut once.

While tolerance is usually seen simply as being a good thing in social affairs, in the world of manufacturing it is a serious matter of tables and specifications.

1Inventor of the cotton gin.