When Paderewski Met Mama Lou: Ta-ra-ra-boom-de-ay! Content from the guide to life, the universe and everything 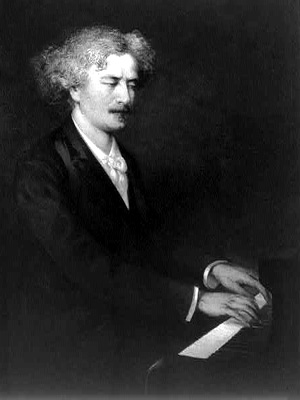 In olden times, music was simple. The same composers wrote everything, from dance tunes to hymns. Think of Stephen Foster, who came up with 'Oh! Susanna!' as well as classy numbers like 'Beautiful Dreamer'. In other words, he could have a banjo on his knee one minute, and be warbling 'Mermaids are singing the wild Lorelei' the next. Sure, there were court musicians and church musicians. And of course, there was that troublemaker Anonymous, who seems to have been responsible for a lot of low-class ditties, and spent much of the time dodging laws against libel, blasphemy, and lèse-majesté. But for a long time in early modern culture, music was less of a niche-market phenomenon than it is now.

All that changed by the 1890s. There were genres. There was high-class, 'long hair' music, and there was low-class trash, like Ragtime. And never the twain would meet, right? Wrong.

Consider Ignace Paderewski, the superstar pianist. Could you imagine the composer of 'Minuet in G' ever sitting down to the keyboard and pounding out 'Ta-ra-ra-boom-de-ay', that international trashy smash hit? Couldn't happen, right? Well... if that were true, we wouldn't have this story about the night Ignace met Mama Lou in the downstairs cabaret of a St Louis house of ill repute. And you know you want to hear this gossip.

A Bit About the Major Players

Ignace Jan Paderewski (1860-1941) was a Polish pianist, diplomat, and philanthropist. As a young man, Paderewski wowed audiences in Paris, London, and all over the US. Women swooned, while critics carped that he didn't play Beethoven right, and besides, his hair was a mess1. The music critics might have preferred Rubinstein, but Paderewski was so popular that he became the very definition of great when it came to piano playing.

In later years, Paderewski did even cooler things. He endowed piano competitions to help young artists. He raised money for starving musicians and Polish refugees. He made Woodrow Wilson add Polish independence to his list of post-World War I peace demands, known as the Fourteen Points. When Poland finally had its own government, Paderewski became its prime minister for a year. Call him the Lech Walesa of 1918. But in 1891, he was merely a musical heartthrob.

We're not exactly sure about the date of the encounter between Paderewski and Mama Lou. That's because our main source of information on the event is Orrick Johns' 1937 book, Time of Our Lives: The Story of My Father and Myself. Orrick got the anecdote second hand from his father, George S Johns. Johns was a journalist for the St Louis Post-Dispatch. When Paderewski first visited St Louis in 1891, only twenty-seven people showed up to the concert at the Exposition Hall2. Paderewski naturally felt dissed, because he was used to playing packed houses. Johns told the Polish virtuoso that it was the fault of bad publicity: St Louis was really into highbrow music (this was true), and next time, he'd do better. (This was also true: on his next visit, the Exposition Hall's 4,000-seat auditorium was full to the gills.)

Paderewski and Johns became friends after that, and whenever Ignace was in town, he and Johns would share post-concert dinners at Tony Faust's restaurant, the best in town, at Paderewski's expense. On one of these occasions, Paderewski asked Johns what there was to do in town after dark, and Johns said, 'Well, there's Babe Connor's place over on Sixth Street...' We're just not sure whether this happened after the twenty-seven-people audience debacle, or when Paderewski had just entertained a huge crowd with an hour's worth of encores. We wish we did, but there you are. History is annoying like that.

Babe Connor: Sarah 'Babe' Connor (1857-1899) was born in slavery in Nashville, Tennessee. After the war she briefly attended Fisk University, the new school for African Americans, but moved to St Louis and took up a more lucrative, but less respectable profession than teaching, medicine, or law. Babe ran a brothel, the most famous in St Louis' large red light district. Babe's three-storey white house, known as The Castle, really brought in the customers – although the claim that the Republican party platform was written there may have been a canard. However, Babe had friends in high places. She also flouted the usual social taboos, being driven around classy Forest Park in her open carriage by a white coachman. Babe liked diamonds, and even had them inlaid in her teeth.

Although Babe Connor's had highly advertised 'Cyprians'3 from New Orleans (which gave her place a cachet), not everyone came for the sex. Downstairs, Babe ran a successful nightclub. Sometimes, the girls danced in long dresses on a mirrored floor. This was more exciting than it sounds, as they weren't wearing any undergarments. The rest of the time, the entertainment included ragtime music by piano greats such as Tom Turpin, and the number-one draw – the bawdy Mama Lou.

Mama Lou: Letitia Lula Agatha Fontaine was from Santo Domingo, was a very smart woman, and spoke clipped British English when she wasn't acting. In her persona of Mama Lou, Letitia dressed as a 'mammy' type: bandanna, gingham dress, apron. Mama Lou was an insult comic. After she'd insulted the audience of high-class johns, Mama Lou sang very naughty songs. Musical entrepreneurs came to the show to steal Mama Lou's songs. She couldn't write music, and she didn't care, and the copyright laws of the day were ridiculously loose. Mama Lou introduced some top hits, such as 'There'll Be a Hot Time in the Old Town Tonight', which was the song of the Spanish American War4. And of course, the biggest and naughtiest hit of the early 1890s, 'Ta-ra-ra-boom-de-ay'.

So these people met, sometime in the early 1890s. Why do we care? 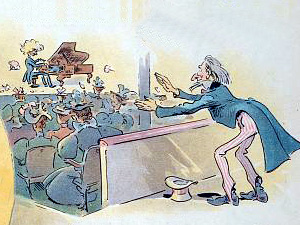 What happened was simple: Paderewski, the lion of high-toned, German-influenced, respectable music, was so fascinated by Mama Lou's singing that he sat down at the piano and played the role of 'Professor', which is what you called a pianist in a dive like The Castle. He made Mama Lou teach him 'Ta-ra-ra-boom-de-ay'. Allegedly, he threatened to include it in a composition, which, alas, never materialised. But the two music professionals had a meeting of the minds.

So what in the world was this song about?

The year in which 'Ta-ra-ra-boom-de-ay' overran the streets of our towns may well give pause to the observer of English habits. The tasteless and irrepressible air was at the time a universal annoyance...
- RH Gretton, A Modern History of the English People, vol I, London, 1912, p.305.

There are different versions of 'Ta-ra-ra-boom-de-ay', but all of the originals have the same plot: a sweet young girl is outwardly prim, but when her guardians aren't looking, she breaks loose into inappropriate behaviour, usually accompanied by acrobatic dancing. Here's some sheet music, if you care to try it at home.

Why was This Song so Popular?

Probably because it combined the sort of convention-challenging cheekiness that was in the air during the Gay Nineties with the two factors that will endear any piece of pop culture to a broad audience: feminist independence (for the women), and sexy female behaviour (for the men)5.

'Ta-ra-ra-boom-de-ay' was first introduced to a general (ie, non-brothel) audience in 1891 in the Boston, Massachusetts revue Tuxedo. The revue's manager, Henry Sayers, later admitted he'd stolen it from Mama Lou. But the cultural appropriation wasn't over. An Englishman named Stephen Cooney saw Tuxedo, and paid Sayers a fee, so that Cooney's wife Lottie Collins could perform the song in the UK. Lottie's acrobatic dancing made the song such a hit that it was featured in the 1893 Crystal Palace fireworks.

Everybody liked the song, it seems: organ grinders, kids on the street, even a parrot who featured in a lawsuit (it also cursed in Spanish)6. Although the rumour may not be true that 'Ta-ra-ra-boom-de-ay' was once played by the Turkish Army under the mistaken impression that it was the British national anthem7, it was certainly a ubiquitous ditty by 1893. And in that year, Paderewski sailed for the US for yet another tour – at the same time as Lottie Collins. One would like to think that they met on tour and compared notes and versions of 'Ta-ra-boom-de-ay'.

We're not sure what Paderewski would have said about the polka version of Ta-ra-ra-boom-de-ay.

Images Courtesy of Library of Congress

1We will admit that this was a young man in serious need of what the hairdresser calls 'Product'.2This venue was on Olive Street, but it isn't there now. It was supplanted by the amazing Carnegie Library building.3'Cyprians' was a coy term for prostitutes, from the connection between Aphrodite, goddess of love, and the island of Cyprus.4President Theodore Roosevelt later disavowed this tune, arguing that the Library of Congress shouldn't preserve it because it was only ragtime. But Teddy had been perfectly willing to belt it out going up San Juan Hill at the head of his famous Rough Riders in 1898. People often try to be more respectable as they get older.5Think Buffy the Vampire Slayer or Xena, Warrior Princess.6Crawfordsville Review, Crawfordsville, Indiana, 22 August, 1896.7We might charitably call that a Borat moment. These things happened even before the Internet.