The Chora Church, Istanbul, Turkey Content from the guide to life, the universe and everything 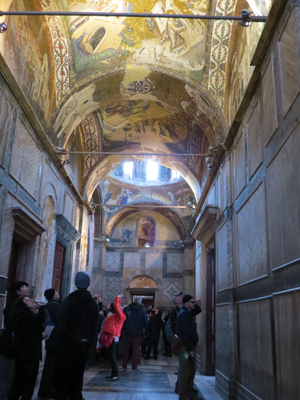 Parts of the church are closed for repairs at the time of writing (March 2015) - the entire nave is closed to the public. This is usually the case in buildings of this antiquity - they need constant maintenance. However, even with the nave off-limits, there's still plenty to see and it is well worth the entry fee.

The church's full title is the Church of the Holy Saviour in Chora. The addendum 'in Chora' means 'in the countryside'. When the first church was built on the site, it was outside the original walls of the city. Much bigger city walls, the Land Walls of Theodosius, were built later and the church is now just inside these walls, being about 200m from them. The church kept the 'countryside' in its name although the city grew to surround it.

When the Ottomans conquered Constantinople in the 15th Century, the church was converted to a mosque and became known as the Kariye Mosque. In the 20th Century it was taken over by the Museum Service and was restored to its original state, opening to the public as the Kariye Müsezi or Chora Museum in 1958.

There was a monastery on this site from the 4th or 5th Century onwards and it was rebuilt many times. The church is the only building of the monastery still standing. We know very little about the monastery. The cemetery was supposed to contain the bodies of Saint Babylas and his 84 disciples, who had been martyred in 294 AD at Nicaea (Iznik). We know that from the 8th Century onward it was a popular burial place for important Byzantines, such as the Patriarch Germanus (head of the Greek Orthodox Church) or Theophanes, the Metropolitan of Nicaea. In the early 12th Century, the Byzantine Emperors abandoned the old Roman Great Palace at the centre of the city which was then 800 years old. They moved out to a new palace at Blachernae, right up against the city walls and very close to the Chora Monastery. The Chora Church became the church of the emperors. In 1296, much of the monastery was devastated by an earthquake.

In the early 14th Century, an important state official called Theodore Metochites ('metto-kee-tess') paid for the rebuilding of the monastery and endowed it with a library. The church was almost completely rebuilt and decorated throughout with mosaics and frescoes. This restoration and building work took place from 1316 to 1321.

Metochites was the Grand Logothete of Constantinople, the man responsible for the Treasury of the Empire1, making him second only to the Emperor. His daughter was married to a nephew of the Emperor. Metochites included a picture of himself in the decor - above one of the doorways is a mosaic of the man himself, wearing an enormous turban, kneeling down and presenting a model of the church to Jesus Christ. The turban tells us that the Byzantines had come a long way since they left Rome, and had adopted many of the customs of the East. But whereas the rest of the East had converted to Islam, the Byzantines steadfastly stuck to their Greek Orthodox Christianity. They were obsessed with religion and it is typical that a rich man would pay for a monastery where a modern millionaire might build a sports hall, theatre or hospital. This increased the rich Byzantine's standing in the community and also, it was hoped, in the afterlife.

Byzantine politics was a minefield - Emperor Andronikos II was deposed only seven years later, and Metochites was exiled from the city for two years. When he returned he was no longer the important person he had been, but he used his position as the sponsor of the restoration of the monastery to be accepted as a monk there. He died two years later and was buried in the Chora Church.

The Ottomans conquered Constantinople in 1453 and it became known as Istanbul. The Chora Church was converted to a mosque some time during the reign of Sultan Bayezid II (1481 - 1512). The main change to the church was the addition of a minaret, the slender tower from which the call to prayer sounds. Inside the building they covered over the mosaics and frescoes. One account says they used wooden screens, while another says they plastered over them, as had been done in other churches converted to mosques, such as Hagia Sophia. This was done because Islam frowned on the depiction of any person. They also would have covered the floor with carpet and added the furniture needed for a mosque - the ceremonial staircase (minbar) and prayer niche (mihrab).

Attitudes change. By the mid-19th Century the Muslims no longer disapproved of pictures of people. Some of the mosaics were uncovered in the 1850s.

In 1945, it was decided to convert the mosque into a museum and it has operated as a museum ever since. Any trace of the building's function as a mosque has been removed, and the mosaics and frescoes have all been uncovered as much as is possible. Some of them are damaged and only partially visible now. The building opened to the public as a museum in 1958.

Byzantine churches are divided into many separate sections inside. It is normal to have a main section called the nave, but also various other rooms, all joined together by doorways. Most Byzantine churches have at least one dome, and the biggest dome normally has an image of Christ the King (Christos Pandokrator) on the inside, looking down on the people.

The main door of the Chora Church is on the west side, as is normal in Christian churches. There are five main rooms in the church: 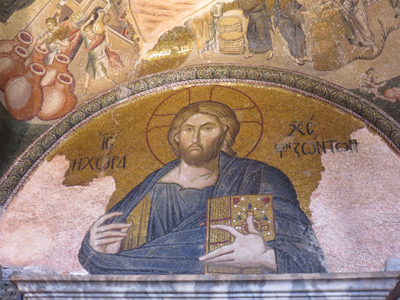 The ceilings and domes of the two porches are completely covered in mosaics. The walls are marble-clad up to about three metres and the mosaics start above this level, but there are some mosaic panels on the walls as well.

The outer narthex is mainly decorated with images of the life of Christ before he started his public appearances. Most of these are the story of his birth, but they also include images of John the Baptist who announced the imminent coming of Christ and some of Christ's miracles. Particularly noteworthy is the image of the three wise men (Magi) talking to King Herod, asking him where the new king could be found.

The inner narthex has many scenes from the life of Mary, the mother of Jesus. These are taken from the Gospel of St James which nowadays is considered apocryphal - that is, it is not accepted as a part of the Bible. Mary is depicted as wearing dark blue flowing robes in all these images so she is easy to spot. There's also the image of Theodore presenting the church to Christ, and panels of Saints Peter and Paul on either side of the door to the nave. The two domes show the genealogy of Christ, with images of many of his male ancestors back as far as Adam through his adopted father Joseph2. The centres of the two domes show Mary and Jesus.

The nave is closed to the public at present. Much of it is unadorned, because the roof collapsed in an earthquake and was replaced, but there are three important mosaics on the walls: 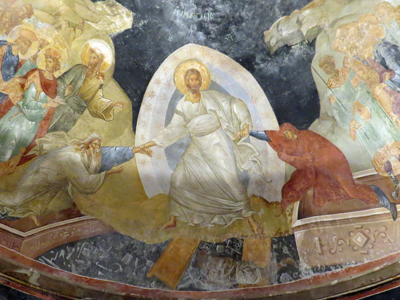 The parecclesion or mortuary chapel is at the south side of the building. It is decorated throughout with frescoes, paintings made directly onto the wet plaster before it dried. Most of these have as their theme the subjects of death and resurrection. Most important is the fresco above the altar which is called the Anastasis or Resurrection. It shows Jesus Christ dressed all in white, having risen from the dead, dragging Adam and Eve from their graves. This illustrates the belief that by rising from the dead, Jesus saved all those who had already died as well as all future Christians.

The Chora Church is in the northwest of the Fatih district which is the old city of Constantinople. It is about five kilometres from the centre of the city and lies within 200m of the Land Walls of Theodosius. It's an out-of-the-way spot which is not well served by public transport. There's probably a bus that goes there, but the Istanbul bus system is not easily tackled unless you speak Turkish. There are four main ways to get to the Chora Church:

Admission (March 2015) is 15TL (about 6 Euros). The Museum Card for 50TL will get you into most of the major museums of Istanbul and lasts three days, so if you are going to see a few museums it is well worth it.

The opening hours are 9:00-16:30 in Winter and 9:00-19:00 in Summer. The museum is closed on Wednesdays. There's a small gift shop within the church, at the corner where the parecclesion meets the exonarthex.

There's a small square outside the church with a café where you can get a nice cup of tea or coffee and some sticky Turkish pastries after your visit.

If you have the time to spare, walk up as far as the Edirne Gate and see the ancient Walls of Constantinople.

1In the UK he would be the Chancellor of the Exchequer.2Further research would be required to determine which of the contradictory accounts in the Bible was used.