Byzantium: The Walls of Constantinople Content from the guide to life, the universe and everything 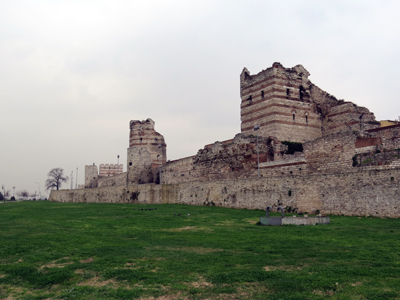 The walls of Constantinople have been a recurring theme throughout this history. The city was one of the greatest in the world, but because of this, it was under constant threat of invasion, so it needed very good defences. With the Land Walls protecting the west side of the city, and the Sea Walls protecting the other two sides, the city had the best fortifications anywhere in the world at the time, and was virtually impregnable by all the techniques of warfare of the time as well.

The city was besieged an estimated 24 times, but no invader ever got past the Land Walls, until 1453, when the Turks finally blasted their way through using big cannons. The use of explosives marked a new technique which the walls had not been built to withstand. The Sea Walls were slightly more vulnerable - even then, they were only penetrated on two occasions during one siege, and it was only through defeat of the Byzantine navy that it was possible to get close access to the Sea Walls.

The Walls of Constantine

The original walls of the city were built during the reign of Constantine. He is supposed to have walked west through the fields from the 'Milion', the centre point of the city, until he felt that he had marked out enough space. He stopped and told the architects to build the walls there. Construction for these walls started in 324, before the official founding of the city in 330. They stretched from the Golden Horn to the Sea of Marmara, a distance of about 4km, and marked out an area for the city of about 7.5 square kilometres.

The city very quickly filled up this area and spilled out beyond the walls, so they were not adequate to protect the whole city. The walls were made obsolete by the building of the bigger and better Land Walls of Theodosius, but they weren't torn down until many centuries later.

The Land Walls of Theodosius

In the period 413 - 422, during the reign of Theodosius II, a minor emperor, a new set of walls were built, further out from the centre of the city. Known as the Land Walls of Theodosius, these are the ones which are still standing. Covering a length of 6.5km (4 miles), they again stretched all the way from the Golden Horn to the Sea of Marmara, enclosing an area of about 14 square kilometres.

The Land Walls of Theodosius were a much more elaborate affair than the Walls of Constantine. They consisted of three separate barriers to invading armies. First was a moat which could be filled with water, about 10m deep. After that was a short flat section, then the first wall, which was lined with towers. Anybody getting through the moat would have to run across the flat section while being bombarded with missiles by people manning the first wall. Behind the first wall, there was another flat section and then a second much higher wall, with much bigger towers.

The Walls of Theodosius were severely damaged in 447 by an earthquake, but they were rebuilt in only three months, because the Byzantines were worried about an imminent invasion by Attila the Hun.

The walls stood firm until they were severely damaged by the cannons of Mehmet II during the Turkish invasion of 1453. After the Turks took the city, Mehmet ordered the walls to be rebuilt and they continued to guard the city until the 19th Century, when through neglect they started to fall apart. Nevertheless, what remains now is still very impressive, and they have been restored in some places to show their original grandeur.

The first line of defence was the moat, which was about 20m wide and 10m deep, and could be flooded if necessary. The wall which formed the inner side of the moat was extended upwards by a distance of 1.5m, so that defenders could stand behind it and fire down on invaders in the moat.

After the moat came a flat area about 15m wide and then the Outer Wall. There was a road running along this flat area.

The Outer Wall was about 8m high and 2m thick. Constructed from blocks of limestone alternated with red tiles, it also went down into the ground almost the same distance, to prevent attackers from tunnelling under it. It had 96 towers, some square, some semicircular, which were on the outside of the wall, so that people inside the towers could fire down on people attempting to scale the wall.

Between the outer and inner wall was another flat area.

The Inner 'Great Wall' was 12m in height, and about 5m thick. Again, it was extended deep under ground to prevent tunnelling. The wall was strengthened with another 96 towers which were up to 20m tall. These were square, hexagonal or octagonal in shape. The towers were spaced out so that they were in the gaps between the towers on the outer wall. They were much bigger than the outer wall towers, and again stood on the outside of the wall, so that defenders could fire on attackers at the base of the wall.

Of course, a wall is no good unless there is a way through it. There were ten main gates in the walls. Five of these were reserved for army use, and didn't have names. They were just called the 1st, 2nd, 3rd, 4th and 5th Military Gates. Interspersed with these were five gates for the use of civilians. These were:

There were also some smaller gates; these would have been bricked up in times of war. In recent times, the 2nd Military Gate, also known as the Belgrade Gate, has been restored to give some flavour of what it would have been like in the Byzantine times.

The Land Walls protected one side of the triangle which was the city of Byzantium. The other two sides looked onto the sea, and were protected by the Sea Walls, which were not as elaborate as the Land Walls, but didn't need to be. In most places, the sea walls consisted of a single wall about 10m - 15m high. There is very little left of this system of walls now.

The suburb of Blachernae in the Northwest of the city was outside the walls. In around the 12th Century, it was decided to extend the Land Walls in a loop around Blachernae. This was a single wall, rather than the double system used along the rest of the Land Wall. The emperors then built a palace in the area, and it became their favoured residence in later centuries, although they still kept the Great Bucoleon Palace south of the Hippodrome.