Ireland and What to Call It Content from the guide to life, the universe and everything 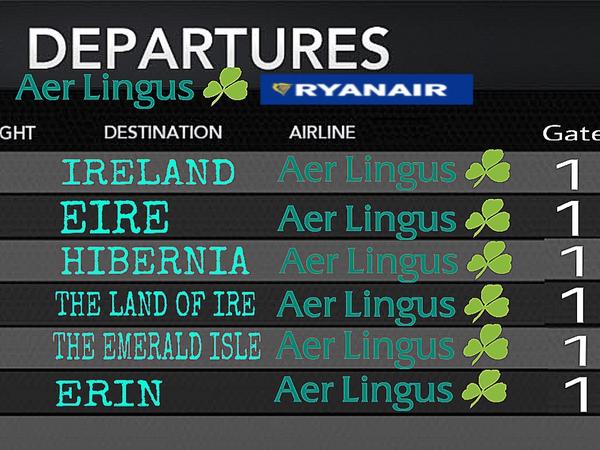 Many people are confused by the names applied to Ireland. What is Éire? Is Ulster the same as Northern Ireland? And are Irish people British? Some of these questions don't even have clear-cut answers among the Irish, and some are clouded by what people think the situation should be rather than what it is. This Entry attempts to clear up these and similar issues.

The Island and How it is Divided Up

The island of Ireland is divided up into four provinces and 32 counties. Long ago there were five provinces, but two of them were combined and now there are only four. They are as follows:

Since the early 20th Century, Ireland has been divided into two political entities.

Whether Northern Ireland is itself a country or not is a matter for debate2. Most people would feel that England, Scotland and Wales are separate countries, which makes the UK strange in that it is a country made up of other countries.

Some Confusing or Contentious Terminology

Ulster - because Northern Ireland makes up most of the province of Ulster, it is often referred to as Ulster (for example 'Ulster Says No'). But there are three other counties in Ulster - Donegal, Monaghan and Cavan - that are in the Republic.

The Free State - this was an old (pre-1949) name for the country which is now the Republic. The title is still sometimes used by people in Northern Ireland, to the great confusion of people from the Republic who didn't pay attention during history class in school and have never heard of the Free State.

The British Isles - this means the islands of Great Britain and Ireland, and the other smaller islands around them such as the islands off Scotland. The name is disliked by people in the Republic because it suggests that Ireland belongs to Britain in some way.

British - this is the most confusing term as there are completely different meanings used by different groups. These can be roughly divided into:

Erin - in some dialects of Irish, the name for Ireland is Éirinn3 rather than Éire, and this has been brought into English as 'Erin'. You'll find this name for the island in many old songs in English. Since these were written before the formation of the Republic, the name Erin can be taken to refer to the whole island.

The Wee North - another name for Northern Ireland, using the northern word 'wee' to mean small in a likeable way.

The Six Counties and the Twenty-six Counties - these again refer to Northern Ireland and the Republic respectively. They're clear enough and sidestep various contentious issues.

All Ireland - this term is used to refer to events that encompass the whole of the island. For example, the sports of Hurling and Gaelic Football are played throughout the island and a county-against-county competition takes place each year, culminating in the All Ireland Final in each sport in Dublin.

The Atlantic Archipelago - this ridiculous title was suggested as an alternative to the term 'British Isles' because it does not suggest any ownership.

These Islands - this term has been used instead of the 'British Isles' in government negotiations because of its neutral associations.

Hibernia - this was the Roman name for the island and means the land of winter, although it was probably originally formed from a corruption of the name Éire and the Latin ending -nia. England (or Britannia as it was known then) was the northernmost region of the Roman Empire and the coldest and wettest. Hibernia was that land across the sea where it never stops raining and is dark all the time. Whether this view of the island was formed by Roman visitors or was an inspired piece of propaganda by some Irish king who wanted to keep the Romans out is not clear. In any event, the Romans never bothered to conquer the island.

The Land of Ire - this dreadful phrase is occasionally used in really bad poetry about Ireland. Even one use is too many.

The Emerald Isle - a name sometimes used in American songs and poems about Ireland, referring to the fact that the island is in fact pretty green as a whole. The term was invented by Belfast-born poet William Drennan (1754-1820) and first used in his poem 'When Erin First Rose'.

1Sometimes spelt Connaught.2Although according to the Gov.uk website, Northern Ireland is classed as a country.3Éirinn is also the dative case of Éire in all dialects of Irish, but this shouldn't concern English speakers.