County Wexford, Ireland Content from the guide to life, the universe and everything 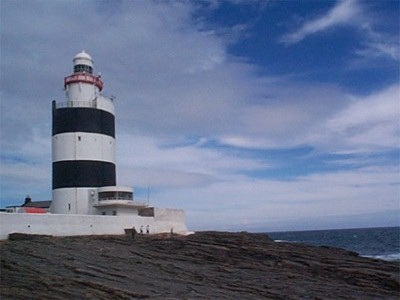 County Wexford is one of the 26 counties of the Republic of Ireland. It is the county in the south-east corner, at the 'bottom right' of the island. Wexford has about 40 miles of coastline along the eastern coast of the Irish Sea, which lies between Ireland and Wales. It also has about 20 miles of southern coast on the Atlantic Ocean.

Wexford is separated from the rest of Ireland by a line of low mountains; in the north are the Wicklow Mountains and in the west are the Blackstair Mountains. These mean that the county is somewhat isolated. The people are fiercely independent as a result.

Other than the mountains along the borders, Wexford is very flat and is almost entirely agricultural land. Wexford is famous for its strawberries and potatoes; the town of Enniscorthy has a 'Strawberry Fair' festival every year in June.

Wexford has slightly more sun than the rest of Ireland. This has earned it the title 'The Sunny Southeast'. It also has an eastern coastline which is basically a 40-mile long beach. Given that it is only an hour or two's drive from Dublin, the biggest city in Ireland, these factors combine to make the coastal region Ireland's favourite holiday resort. From Courtown in the north to Rosslare in the south, Dubliners flock to the Wexford beaches for long weekends or weeks in the summer.

As befits a lowly-populated agricultural area, Wexford has very little history. The only incident of note was the 1798 rebellion when the pikemen of Wexford rebelled against the ruling aristocracy in what was supposed to be a country-wide rebellion. Due to poor communications, the rebellion was cancelled everywhere else and ended up being confined to Wexford. The government forces easily quelled the rebels and many people were executed.

The principal town of County Wexford is also called Wexford. It is the town after which the county is named. It lies on the south side of Wexford harbour, the estuary of the River Slaney. The town was founded by the Vikings in about 800. They named it Waes Fjord ('inlet of the mud flats') and the name hasn't changed much since then. Originally, there was quite a deep pool at one point and this formed the centre of the port. In the 18th Century, a new quay was built around the sides of the pool, forming the semi-circular 'crescent' which still stands today. The currents changed and the pool silted up, making it useless for shipping.

The port of Wexford was unreliable and difficult because of the constantly changing sands of Wexford Harbour. In the early 20th Century, a new port was made, about 25 miles south, at Rosslare. This is a deep water harbour unaffected by tides and currents. All major shipping now uses this port and Wexford port is used only by fishing boats.

The town of Wexford closely follows the quays. The main street runs more or less parallel to the river and is about a mile long from Redmond Square at the west end to Barrack Street at the east end. It starts as Selskar Street, runs into the square called the Bull Ring, then proceeds as Main Street. Almost all the shops in Wexford lie along this one line.

There is an enormous bridge which connects Wexford town with the other side of the river. This is one of the longest bridges in Ireland.

In the 20th Century, Wexford was a poor town, with nothing whatsoever to offer a visitor. The fortune of the town changed in 1950 with the institution of the Wexford Opera Festival. An old defunct theatre was acquired and the company started to produce operas. At the start, they staged standard operas but as times improved, they became more daring and eventually decided that they would always put on unknown operas. The festival became world-renowned. Many young international singers started their careers singing in Wexford. The festival now runs for three weeks at the end of October. Three operas are performed in rotation, so that a visitor staying for any three successive nights can attend all three operas. The operas are accompanied by the National Symphony Orchestra of Ireland or an orchestra of equivalent standard.

Along with the opera, a large number of other musical and artistic events take place in Wexford during the three weeks of the festival. The festival is much more than just opera. There are singing pubs, concerts, recitals and art exhibitions.

Wexford is a magical place to be during the festival. The shops decorate their windows with musical themes. There is a prize for the best display. The narrow streets are packed with people, both music lovers and the performers themselves. It is perfectly normal to have a drink in a pub and find the people beside you discussing the difficulties of playing a particular oboe phrase or the waywardness of the conductor. At breakfast in the hotels and B & Bs, conversations are struck up between total strangers discussing last night's performance or speculating on the delights of the performance yet to come.

The main town in North Wexford is Gorey. About six miles from Gorey on the coast is Courtown. This is a huge holiday resort. It has long been a haunt of working-class people from Dublin, as it is only about an hour's drive from the city. There are 'amusements', by which is meant slot machines where you can gamble away your money, ghost trains, bumper cars and so on. There is also a beach. The coast around Courtown has recently seen a huge number of 'holiday homes' being built. As a result of tax concessions, whole estates of houses were built just as holiday homes. Now there are thousands and thousands of little houses. It is more like a Dublin suburb than a piece of Wexford.

Ballymoney beach, north of Courtown, is one of the four best beaches in Wexford, earning the coveted 'Blue Flag' for safety and cleanliness in 1999. One problem with the beaches around Courtown is that there is almost no tide. This is due to a peculiarity in the way the tidal currents flow into the Irish Sea. There is a 'fixed point' just off Courtown, where there is no tide at all. In Courtown, the difference between low and high tide is small and sometimes the tide only comes in once a day instead of twice. This means that the sand on Wexford beaches is not so good for making sandcastles.

South of Courtown is Blackwater, a picturesque town a few miles from the sea. This has long been a favourite holiday resort.

Inland from Blackwater is Enniscorthy, a large town on the River Slaney. The Strawberry Fair festival is held here every year in June.

Still further south is Curracloe. The beach at Curracloe is Wexford's finest sandy beach. It is about ten miles long and is absolutely spotless, with perfect sand. Underwater, the beach shelves fairly steeply, so it is a good beach for strong swimmers, but not so favourable for beginners and the water is cold. Curracloe beach also got a 'Blue Flag' in 1999.

The south-east of the county is the sunniest area of Ireland. Despite the sun, it is often colder than you might expect because of strong winds.

The main resort here is Rosslare. This town is often called Rosslare Strand to distinguish it from the town at Rosslare Harbour a few miles further down the coast. Rosslare Strand has many hotels, some restaurants and a good beach (again with a 'Blue Flag' in 1999).

Rosslare Harbour is an international port, with boats leaving for Pembroke and Fishguard in Wales, and Cherbourg and Roscoff in France. All new cars come into Ireland through Rosslare Harbour. There are vast storage yards where the cars are kept until bought. The town at Rosslare Harbour itself is small, with hotels.

The south-east has two major golf courses, one at St Helen's Bay, the other at Rosslare (Strand).

Of interest to bird watchers is Lady's Island Lake. This is a peculiar freshwater lake with no outlet, separated from the sea by a barrier of sand dunes. The water is of variable salinity, as winter storms can cause waves to break over the dune barrier, sometimes breaching it completely. One of Ireland's biggest colonies of terns lives on the lake during the summer.

The south-east can also be extremely windy, which explains the windmill in Tacumshane, one of the very few working windmills left in Ireland.

This corner of Wexford has a few sights that are well worth visiting: the John F Kennedy Arboretum, the Hook Lighthouse, Kilmokea Gardens and Duncannon Fort.

There is a good beach in Duncannon, on the estuary of the Suir river. Along the south coast of Wexford, the beaches are stony and are not considered safe for bathing. Strong tidal currents make them very dangerous.

Half way along the south coast is Kilmore Quay, a major fishing port. A visit to the fresh fish shop is a must; here you can buy whatever the fishermen brought in that day. There is an interesting nautical museum in an old lightship which has been set into the quay.

The town of New Ross, the second biggest town in the county, lies in the south-west, on the river Suir. It is a port and industrial centre.

Wexford Harbour is the only indentation in the eastern coast. It is the estuary of the river Slaney. It is wide, shallow and full of mud. The currents cause the mud and sandbanks to shift around so that it is constantly changing. The entrance to the harbour was only 500m wide until about 1900, when the shifting sands caused the southern spit to disappear. Now there is quite a wide entrance.

The mud flats on either side of the harbour are known as 'slobs'. The northern slobs were reclaimed from the sea in the 19th Century. They now consist of flat agricultural land. The reclamation of the southern slobs was not so successful. One major area was flooded and never recovered; it has been reclaimed by the sea. The slobs are nowadays a favourite feeding place of many wild birds, including the Greenland white-fronted geese, which started arriving in Ireland around 1930 - now one third of the world's population spends the winter on the north slob every year. There is a small visitor centre there where you can learn about the geese and get a chance to see a few.

Places to Visit in Wexford