Irish National Heritage Park, Ferrycarrig, Wexford Content from the guide to life, the universe and everything 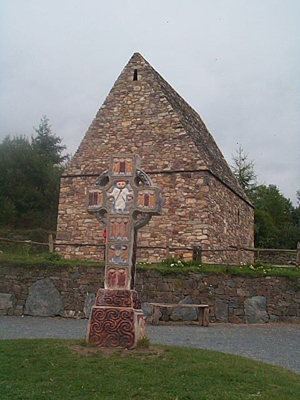 The Irish National Heritage Park, situated in Ferrycarrig, County Wexford, is an attempt to reconstruct the past of Ireland, from the time people first arrived (c. 8000 BC) until the arrival of the Normans in the 12th Century AD. It does this with a series of replicas of the types of houses and villages in which the people lived and demonstrations of their way of life. The whole park is very picturesquely set in woodland so that it resembles the early habitations when Ireland was covered in forest.

Before entering the Park, you might like to watch the 10-minute video presentation, which sets the exhibits in context. Guided tours of the Park are included in the admission price, but you can also find your own way around perfectly by means of the explanatory signs.

The first people came to Ireland in about 8000 BC, during the Middle Stone Age. They were hunter/gatherers, knowing nothing about agriculture. In about 4000 BC, farming arrived and heralded the New Stone Age. In about 2000 BC, metallurgy was introduced and the Bronze Age began. You can read about the people and their way of life in Pre-Celtic Ireland.

The Park contains reconstructions of the dwellings of the Middle Stone Age hunters and of the New Stone Age farmers. The former lived in dome-shaped tents made from branches tied together and covered over with animal hides. The latter had more substantial houses made from stout poles set into the ground with branches woven between them to make walls, and a thatched roof to cover the whole thing right down to ground level.

Also shown here are replicas of the burial and ritual sites of the pre-Celtic people: a portal dolmen1, a cist burial2 and a stone circle.

The Celts arrived in Ireland in about 500 BC and their influence spread so that by about 500 AD, Ireland was completely Celtic, speaking a Celtic language and with Celtic customs. At about this time, a different sort of invasion took place: Christianity. The Celts adopted Christianity very quickly. Religious life revolved around the many monasteries that were set up throughout the country. Here was the only place that a man could get an education. As well as farming their own food, these monasteries were supported by gifts from local villages, in the hope that the monks' prayers would help the villagers' immortal souls.

The Heritage Park has many reconstructions representing the Early Christian Celtic Era. There is an Ogham stone, showing the ceremonial alphabet of the Celts, a Ring Fort and a Monastery.

The Ring Fort, or Rath, is a village surrounded by an earthen ring on which stands a paling fence of stout wood poles. This is the way the normal people of Ireland lived for nearly two thousand years and remains of more than 40,000 of these raths are still visible today in Ireland. The buildings within the rath are of stone with thatched roofs. Outside the rath is a farm. At one stage, this was a working farm with live animals, but an outbreak of Foot and Mouth Disease a few years ago forced it to close down.

The Monastery shows a stone church with corbelled roof3 and a Celtic High Cross, complete with pictures from the Bible. During this period, people started to use machines and special constructions to make agriculture and everyday life easier. Here you can see a corn drying kiln, a horizontal water mill and a Fulacht Fia - a method of cooking large amounts of meat in a special wood-lined pit.

During the Celtic period, Ireland was raided by Vikings, mainly from Norway, who later settled around the coast and founded many cities, including nearby Wexford. The Heritage Park has a Viking long house and a shipyard, complete with a small Viking ship. These are situated away from all the other Celtic exhibits because they are beside the river.

The Normans were an Anglo-French people who invaded Ireland in 1169 and quickly established themselves as the ruling class. The conquered people of Ireland continued to speak a Celtic language and to live in ring forts. They also developed a new type of dwelling place, the Crannóg (pronounced crann-ogue). This is a village on an artificial island in a lake.

One of the Park's best exhibits is its Crannóg. The island is constructed by piling wood into the lake and covering it with clay. The houses look similar to the others in the Park, but the walls are made from wattle and daub rather than stone to reduce the weight. At times, actors in period costume demonstrate the crafts of the ancient people.

In contrast, the Park's Norman Fortress is very disappointing. Situated at the top of a long steep hill, it is imposing from the outside, painted white as these castles were, but it is nothing more than a shell. There are no houses inside and even no way for defenders to stand at the battlements. All in all, visitors may consider giving it a miss, especially if you are stuck for time or don't relish the long walk up the hill.

Also at the top of the hill are an unimpressive ditch and a Round Tower. The ditch is actually part of a genuine Norman castle that once stood on this spot, but the castle is long gone. The ditch has been dug by archaeologists and revealed lots of interesting stuff, but there is nothing to see now.

The Round Tower was built in the 19th Century as a memorial to Irish soldiers who died in the Crimean War. It is modelled on an Early Christian Round Tower. These were built in monasteries as bell towers and were used as places of refuge when the monastery was invaded by marauders. The only entrance to the tower is about 10 feet up, and was reached by ladder. When all the monks were in the tower, they could pull the ladder up behind them and wait for the bandits to go away.

The Park is situated on the main N11 road from Dublin to Wexford, at Ferrycarrig where the road crosses the Slaney river. There is a visitor centre with car park, cafeteria-style restaurant serving hot food and snacks, and a gift shop.

Admission is €7 for adults, with reductions for seniors, students, children and family groups.

Allow about 2½ hours to see the Park if you are going around it on your own, and longer if you want to take a guided tour.

The Park's own website is at Irish National Heritage Park.

1A portal dolmen is a type of grave consisting of two standing stones which make a doorway, a number of smaller stones and a giant capstone.2A cist burial is a small stone-lined box set into the ground and used as a grave.3A corbelled roof is one made from small flat slabs of stone, each one projecting slightly beyond the one below it.