Balaam: Donkey Abuser or Rescuer of Civilisations? The Deir Alla Puzzle Content from the guide to life, the universe and everything 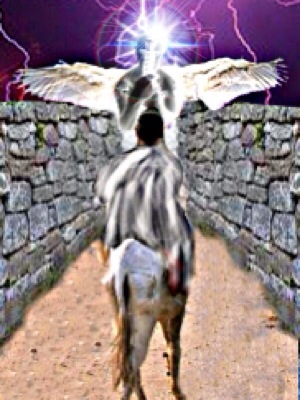 The following is a serious contender for the title of Funniest Anecdote in Scripture:

The moral of this story is clear: animals are much smarter than humans, and angels recognise this fact.

Balaam, the prophet in this story of the Exodus, gets really bad press in the Torah1. He's a prophet, which is sort of like a psychic. And he seems to be on speaking terms with Yahweh, the god of the Hebrews2. But he's not a Hebrew, and he doesn't even like them. In fact, he works for the opposition. In the story quoted above, Balaam – sort of an independent contractor prophet – is under hire by the King of Moab, a local ruler who is not happy with these hordes of Hebrews traipsing through his territory. He wants them cursed, and Balaam's rates are competitive. Unfortunately, Yahweh has other plans, such as making Balaam bless the Hebrews rather than putting the whammy on them. Balaam is a bit slow on the uptake, though, and has to be persuaded by a donkey and an angel.

But one culture's villain can be another's hero: just think of Napoleon, George Washington, or the Duke of Cumberland. Somebody must have liked Balaam. For millennia, the only records of this Canaanite prophet were his negative reviews in the Bible – in addition to being patronised by draught animals and supernatural beings, Balaam was eventually killed off by the invading Israelites. But in 1967, some Dutch archaeologists found a wall inscription that told the other side of the story: a saga of goddess rescue that could have come directly from the latest blockbuster film.

Here's the story, as the Canaanites told it.

The Tale of a Tell

The text was found on a tell, a hill created by centuries of human occupation and rebuilding. The words were written on a column in a chamber of a Bronze Age sanctuary in what is now Deir Alla, Jordan, sometime in the 8th Century BCE, maybe (it could have been the 9th...). Scholars agree that the text itself is much older than that, but not on how much older. They don't agree about much else, either. Arguing goes on about the dialect it was written in: Aramaic, Canaanite, Gileadite, Moabite... And the order of the fragments, well... There was an earthquake, and the whole thing was written on plaster, so what you've got here is the ancient equivalent of a fridge-magnet poem after the kids reshuffled it. So besides translating the text, you've got to rearrange the story to make sense. (Hint to scholars: try starting with the problem, and moving towards the Happy Ending. Unless it's a Coen Brothers film3.)

But the poem is about Balaam. And he's a Good Guy. Oh, and the inscription is the oldest copy of a text in a West Semitic dialect, which makes it older than the oldest extant Bible texts. The story? Well, it starts when a bunch of concerned gods wake Balaam up in the middle of the night. They represent a sort of Committee to Save the Planet. They need Balaam's help.

As near as can be made out, what with the crumbling plaster and the out-of-order fragments, here's how the story starts:

The misfortunes of the Book of Balaam, son of Beor. A divine seer was he.

The story is definitely about Balaam, son of Beor. And it's a thrilling tale. It seems that Balaam gets most of his information at night, a bit like Alison Dubois of Medium.

Lo! Gods came to him in the night and spoke to him.

Balaam obviously shared with Albert K Bender the urgent need for a spirit-proof lock on his bedroom door. The next day, according to the reconstruction. Balaam began fasting and weeping, and when people asked him why, he told them the news was pretty bad. The Shedin had come calling with a tale of woe.

Who, you ask, were these Shedin? (They sound like a new kind of Doctor Who villain.) They were the gods of ancient Canaan. Whether they were good or bad depends on who you talked to. Abraham, the ancestor claimed by the Israelites, made a covenant with a god called El Shaddai, which is the same word as that describing this council of gods. The name has connotations of power, strength, and general spookiness. By the time of the Exodus, the Israelites were calling their god Yahweh, and insisted that the Shedin were demonic, and that Yahweh was in no way connected to them. He didn't even meet them socially.

The gods have banded together;
The Shaddai gods have established a council,
And they have said to the goddess Shagar:
'Sew up, close up the heavens with dense cloud,
That darkness exist there, not brilliance;
Obscurity and not clarity;
So that you instill dread in dense darkness.
And – never utter a sound again!'

Or some variation thereof, depending on which scholar you talk to. Obviously, the forecast calls for extremely cloudy, followed by early morning apocalypse. And the poor goddess is now under a curse. Something needed to be done.

The next part has a lot about birds in it, but it's mostly rhetorical: vultures cry out, pigeons fly over the devastation, that sort of thing. Oh, and the rabbits get a lot to eat. It's difficult to sort out. Then, Balaam comes to the goddess's rescue, taking her from one seer to another, sort of involving every expert he can find in the search for a cure for Shagar's case of Acute Looming Armageddon. Eventually, he is successful: the end of the world as Canaan knew it was averted.

They heard incantations from afar...
Shagar-and-Ishtar did not...
The piglet drove out the leopard...
And he beheld...

We wish we knew what exactly he beheld, or what that piglet was up to. Alas for broken plaster. Hopefully, the scholars will come up with more information soon. And maybe they will translate more of the next part, which has to do with doings in Sheol, the Canaanite version of the Afterlife. That would make a very nice sequel to the saving-the-world narrative.

Are you itching to get your hands on more epic material? Here are some sources.

Gary A Rendsburg's discussion of the dialect question, 'The Dialect of the Deir 'Alla Inscription', Bibliotheca Orientalis L No 3/4, May-July 1993, p310. If you read Hebrew, you'll find this fascinating. Otherwise it might be tough going.

JP Lesley's explanation of 'El Shaddai', from Proceedings of the American Philosophical Society, vol 23, 1886. An oldie but a goody.

A stab at the inscription by some scholars, published by Livius.org. There's something in there about the god El's sex life, so it's adults-only, please.

Katharine QannaYahu's online article about the Deir Alla inscription does not offer a translation, but has a handy map that locates the find along the Jordan River.

Another Deir Alla translation on a theosophical website. Contains pictures of the fragments, so that you can appreciate what the scholars are up against.

Don't like any of these academic guesses? Make up your own story. You might just have the plot for your next graphic novel.

1The Torah – Genesis, Exodus, Leviticus, Numbers, and Deuteronomy – is also called the 'Five Books of Moses' in the Christian Old Testament.2Also known as Israelites.3The Coen Brothers have made a film based on Homer's Odyssey. They could just as easily do the same with the Deir Alla inscription. We recommend George Clooney to play our hero. He has experience with prophetic activity.