Calling Occupants of Interplanetary Craft - Bender and the Men In Black Content from the guide to life, the universe and everything 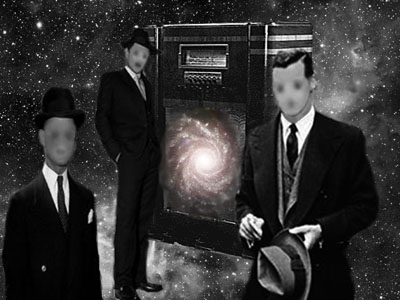 Please close your eyes and concentrate
With every thought you think
Upon the recitation we're about to sing
Calling occupants of interplanetary craft
–   Anthem for World Contact Day,   Klaatu, 1976. From their album 3:47 EST.

On 15 March, 1953, at 6pm, EST, Albert K Bender lay down on the bed in his attic apartment in Bridgeport, Connecticut. He cleared his mind, as best he could, and recited the appeal he had written for himself and his fellow-members of the International Flying Saucer Bureau1. Hoping his friends were doing the same, Bender recited his mantram three times:

Calling occupants of interplanetary craft! Calling occupants of interplanetary craft that have been observing our planet EARTH. We of IFSB wish to make contact with you. We are your friends, and would like you to make an appearance here on EARTH. Your presence before us will be welcomed with the utmost friendship. We will do all in our power to promote mutual understanding between your people and the people of EARTH. Please come in peace and help us in our EARTHLY problems. Give us some sign that you have received our message. Be responsible for creating a miracle here on our planet to wake up the ignorant ones to reality. Let us hear from you. We are your friends.

Soon, Bender had his answer. It was not one he really wanted to hear. But before we tell you about it, let's back up and take a look at the whole 'alien-contact' situation. In using telepathy to talk to aliens, Bender was following a much older tradition than he imagined.

In the year that King Uzziah died I saw also the Lord sitting upon a throne, high and lifted up, and his train filled the temple.
Above it stood the seraphims: each one had six wings; with twain he covered his face, and with twain he covered his feet, and with twain he did fly.
And one cried unto another, and said, Holy, holy, holy, is the Lord of hosts: the whole Earth is full of his glory.
And the posts of the door moved at the voice of him that cried, and the house was filled with smoke.
Then said I, Woe is me! for I am undone; because I am a man of unclean lips, and I dwell in the midst of a people of unclean lips: for mine eyes have seen the King, the Lord of hosts.
– Isaiah 6: 1-5, Authorised Version.

Albert K Bender was an alien contactee – at least, by his own account. Ufologists, scientific-minded individuals that they are, classify alien contact experiences that predated the 1950s as 'proto-contactees'. We suspect they need to take the record back a few thousand years.

Isaiah didn't have a serious problem with alien contact. He knew what these beings were: angels of God. He knew what they wanted: to give him a message for mankind, one that would help the inhabitants of planet Earth live better lives. Albert K Bender was expecting his aliens to show up with a similar message of healing and light.

Boy, was he about to be disappointed.

Lights and the Smell of Sulphur

According to Bender, here's what happened:

I felt a terrible cold chill hit my whole body. Then my head began to ache as if several headaches had saved up their anguish and heaped it upon me at one time. A strange odour reached my nostrils – like that of burning sulphur or badly decomposed eggs. Then I partly lost consciousness as the room around me began to fade away.
Then small blue lights seemed to swim through my brain, and they seemed to blink like the flashing light of an ambulance.
– AK Bender, Flying Saucers and the Three Men.

Bender was getting more than he bargained for out of World Contact Day. Why couldn't these people just knock on the door, like everyone else? But worse was to come. Bender might have expected the aliens to be pleased with him for reaching out the open hand of interplanetary friendship, but he was in for a rude awakening. The next thing the alien said was: 'We have been watching you and your activities. Please be advised to discontinue delving into the mysteries of the universe. We will make an appearance if you disobey.'

What? What kind of greeting was that? No, 'We come in peace'? No 'take us to your leader'? No offers to appear on the chat shows? Was this any way for a self-respecting Alien Visitor to behave? Bender asked him why they were serving him with a galactic 'cease and desist' order.

'We have a Special assignment,' came the reply, 'and must not be disturbed by your people.'

In other words, it was all 'need to know'. And humans didn't need to know.

Things went from bad to worse when the Men In Black showed up.

The Men In Black

Bender planned to share the startling revelations of World Contact Day with the world. In fact, he promised all the readers of his journal, the non-peer-reviewed2   Space Review, that he would tell all in July. But July came, and no startling revelations. The reason? Opposition on more than one planet.

First of all, Bender's associates at the IFSB were not happy with the supernatural turn the proceedings were taking. This was all becoming needlessly messianic. They threatened to have Bender arrested if he 'told all'. The aliens threatened to do worse.

Somewhat incautiously, Bender wrote a secret account of his experiences with the aliens, planning to sneak a copy to the government. He wasn't secret enough to fool the aliens. When he opened the locked box containing the revelatory manuscript, it was gone! There was a suspicious odour of sulphur in there, too. After that, the Men In Black really started leaning on him.

Exhausted from all the excitement, Bender needed a vacation, so he went away for a couple of weeks in July. When he got home to his attic, the place smelled of sulphur, and the radio was on. Bender was unnerved, with good reason: according to the aliens, they could travel by radio frequency. That's when the alien muscle arrived. Three men appeared in his quarters, and they were dressed very strangely.

All of them were dressed in black clothes. They looked like clergymen but wore hats similar to Homburg style. The faces were not clearly discernible for the hats partly hid and shaded them. Feelings of fear left me, as if some peculiar remedy had made my entire body immune to fright.

The alien agents appeared to be using out-of-date fashion manuals. If they wanted to blend in, they weren't doing a very good job of it. The aliens threatened Bender with dire consequences if he kept telling people about UFOs. Then they disappeared through the radio, leaving Bender collapsed on his bed, and bathed in a cold sweat.

What good is talking to aliens, if you can't tell everyone about it?

Bender had further encounters with these unpleasant agents from outer space. Once, they even abducted him onto their spaceship. Another time, he visited their secret base in Antarctica, where he met their leader, a 'bi-sexual' (hermaphroditic?) creature. The aliens explained that they were only on a flying visit from the planet Kazik3. In about 15 years, they promised to leave. They only needed to extract some rare element from sea water, you see, and they would be on their way. If Bender kept his mouth shut, nobody would get hurt.

In a way, Bender co-operated. He stopped publishing Space Review and quit being involved with the IFSB. Later, however, he described his alien encounters in a book called Flying Saucers and the Three Men, published by Grey Barker of Clarksburg, West Virginia, under the Saucerian Books imprint.

Barker claimed to have run-ins with the MIBs. He also popularised the Mothman story. Some insiders claim that Barker was a practical joker with a twisted sense of humour, others that he just liked to give the public what it wanted.

Bender, on the other hand, was a true believer. This might be surprising, when one considers that he came from Bridgeport, Connecticut, the home of PT Barnum. Barnum was the circus entrepreneur who famously commented that there was 'a sucker born every minute'.

As Isaiah's experience demonstrates, alien contact stories are not new. What is new is the interpretation put on these experiences by modern people. As the Keebler Company has been known to say, 'Some people don't believe in elves. They believe in factories.' A spaceship is so much more sensible an apparition than the merkavah chariot.

World Contact Day has never been forgotten. In 1976, the group Klaatu came up with an inspiring anthem, Calling Occupants of Interplanetary Craft. UFO fans everywhere now get together for UFO Day on 15 March. In honour of the adventure's 60th anniversary in 2013, the celebration of interplanetary friendship was extended to a whole week of events.

We hope nobody told the Men In Black. But they've probably gone back to the planet Kazik by now.

Listen to these accounts by Albert K Bender and others of encounters with Men In Black, on 'UFO Update'.

1The IFSB was really international. They had members from as far away as Australia and New Zealand. They hoped to become interplanetary.2Who would constitute a peer review for a 1953 UFO journal is not clear.3Kazik should not be confused with Kazakhstan. That country has had enough attention from the lunatic fringe.