The History of the Lincolnshire Flag Content from the guide to life, the universe and everything 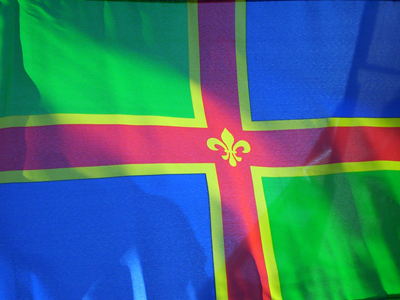 Lincolnshire is the second-largest county in England after Yorkshire. Although being one of the original 39 traditional counties (referred to as Lindsey) in the 11th-Century Domesday Book, Lincolnshire did not have its own flag until well into the 21st Century. This is despite having its own anthem ('The Lincolnshire Poacher'), flower (Viola riviniana - wood violet) and region-specific food. Steps were taken by the staff of a local radio station in collusion with the county's magazine workers to rectify this glaring omission in August 2005.

According to the 2011 census, the population of Lincolnshire numbered 1,042,000, a substantial increase on the previous census tally of 646,645. However, not all of these people listened to BBC Radio Lincolnshire or read Lincolnshire Life magazine, so the chance to vote for their favourite flag design of the six submitted for consideration passed most locals by. Some only found out when the result was announced in October 2005. It's not known how many votes were actually cast, but the winner was designed by Michelle Andrews, the website producer at BBC Lincolnshire.

The chosen design consists of:

The fleur-de-lys on a red cross (with a white background) is the flag and municipal coat-of-arms of Lincoln, the principal city of Lincolnshire. The yellow colour of the fleur-de-lys represents Yellowbellies, the nickname attributed to Lincolnshire-born people. The green colour is for the fertile area of the reclaimed Fens, abundant trees and the leaves of the many flower varieties. It is also a nod towards the famed Lincoln green, the colour of the outfits popularly thought to have been worn by Nottinghamshire legend Robin Hood and his band of outlaw friends1. The blue colour reflects the vast expanse of blue sky on view thanks to the flatness of the Fens and the North Sea which forms the county's eastern border until it reaches Cleethorpes and the Humber estuary. The red cross, besides being on the flag of England, could be honouring the Redcoats of the very first Butlin's holiday camp at Skegness, or the world-famous Red Arrows based at RAF Scampton, 10km from Lincoln, or both. The gold border celebrates the shimmering ribbon of light reflected on the River Humber when the full moon rises over Spurn Head, which is a quite magical event especially at times of the supermoon. The beaches along the shores of Lincolnshire can also be described as golden due to the cleanliness of the sand. The golden tone may also reflect the flaxen hair colour of the Danish fisherman Grim, who, according to local legend, fled across the North Sea with his wife and adopted son Havelock2, and founded Grimsby where they landed. 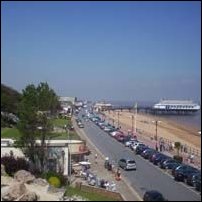 The golden sand and blue sky at Cleethorpes

An opinion poll conducted by Lincolnshire County Council after the flag was launched discovered that two-thirds of those who responded did not like the design. Some queried the repetition of the Lincoln coat-of-arms and the choice of the fleur-de-lys, with alternate suggestions being an apple above a man's silhouette (a nod towards Woolsthorpe-born Sir Isaac Newton), and a quill in deference to Poet Laureate Alfred Lord Tennyson (born in Somersby near Horncastle). One interesting suggestion was a handbag on an anvil to honour Grantham-born Margaret Thatcher, Britain's first female Prime Minister. At the time of writing no further poll has been conducted but the flag appears to have been generally accepted. Lincolnshire flags flutter atop local council buildings and churches and feature on pennants and bunting. Lincolnshire flag sand castle decorations, pin badges and much more can be bought from seaside shops. One flag has even been taken on a charity trek to the North Pole! Chartered surveyor Andrew Pearce took it along on behalf of his wife Catherine:

[my wife is] born and bred Lincolnshire, I work and obviously live in Lincolnshire and we thought we'd put Lincolnshire on the map.
– Polar explorer Andrew Pearce

Lincolnshire flags now fly prominently each Lincolnshire Day, 1 October, since the inaugural day in 2006. The date was chosen by local residents to honour the anniversary of the Lincolnshire Rising in 1536. Should anyone not locally-situated wish to purchase a Lincolnshire flag or the same design merchandise such as an apron, pen, tea towel or cufflinks, these are available at the Lincolnshire Life website.

1Except for Will Scarlet, of course, who preferred red silk.2An infant heir to the Danish throne who should have been murdered on the instructions of another heir, but Grim refused to kill the baby, fleeing with him to safety instead.