Brain's Faggots Content from the guide to life, the universe and everything 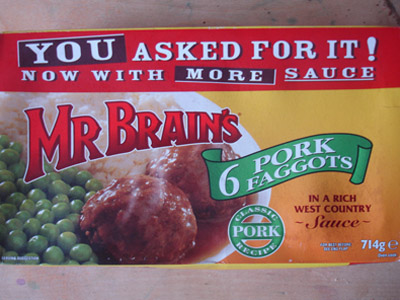 If there's ever a food product which has defied all the rules of brand marketing, it is Brain's Faggots. The name alone would undoubtedly lead the uninitiated to steer a wide berth, and what exactly goes to make up the steaming pinky-brown lumps of reconstituted pig is a subject possibly best left unresearched. Yet, this deceptively tasty meatballs-in-gravy frozen ready meal has served the Great British public well for many decades. This is its story.

Anyone trying to persuade you to eat Brain's Faggots may first have to assure you of two things: the dish does not contain brains, and it has no connection with an offensive homophobic term popular in the United States. These statements are largely true.

Faggots began as a traditional peasant's dish from England's West Country. They consisted of pork offal: all the leftover bits and pieces of pig were combined into balls with onions, milk-soaked breadcrumbs and herbs, and wrapped in a sheep's  caul - the amnion or membrane enclosing the foetus of an unborn lamb. However, they often contained brains; indeed, the celebrity chef Keith Floyd would nostalgically recall his mother's recipe from the 1950s which used pig's brains. Strained sheep's brains, too, would sometimes make a delicious foamy sauce for the dish.

Yet, the brain behind Brain's Faggots was one Herbert Hill Brain, born in 1864 in Kingswood, near Bristol, one of six children of a grocer's clerk. He started a grocery business in Temple Street in 1890, and in 1927 began producing hams on a site in Upper York Street. The faggots first appeared in the mid-1930s, the result of an employee suggestion. Brain described his creation as 'savoury ducks', a name which can be traced back to the Middle Ages. They were served in his 'West Country Sauce' - a thick gravy; indeed, the current manufacturer claims to follow the same recipe today, but uses choicer pieces of pork and pork liver in the faggots themselves.

Generations of Brains1 managed the family business until after the Second World War, when it was eventually sold to one of the large food corporations. In the latter decades of the 20th Century the brand has passed between Unilever Bestfoods, Kraft and Hibernia, and since 2003 has occupied the portfolio of the Irish-owned Kerry Foods, a home it shares with Walls, Richmond, Porkinson and Bowyer's sausages, Mattessons' cold meats, Homepride flour, and Cheesestrings, those peelable monstrosities found in a million primary school lunchboxes. The faggots are still produced in a Bristol factory, and in 2002 around 100 million of them were made, frozen, and subsequently consumed.

So, why 'faggots'? The word ultimately derives from the Greek phakelos meaning 'bundle'. A faggot was a bundle of sticks used for firewood, as well as a more generic term for a collection of things, and it is thought that this led to the dish being named after a bundle of offal. It's not entirely clear how the word came to be an offensive homophobic taunt, but it is true faggots became associated with burning heretics at the stake. It became a derogatory name for a woman, and subsequently for an effeminate man.

This is entirely irrelevant to the faggot in the culinary sense, of course, although it is true that in the Provence region of France the equivalent items are known as gayettes.

All of this has led to a spot of difficulty for the marketing consultants. It would be difficult to rebrand the product without losing both its history and its common name, which, in any case, was completely inoffensive to the British public. The only real change made over the years was to call them Mr Brain's Faggots, so removing any lingering doubt over their contents. The decision to press on regardless with the name, however, has led to some rather arresting slogans, including the 1970s classic:

Surprise your husband with a faggot!

In 2002, the then custodians of the brand, Hibernia launched a nationwide competition to find a family to help them market the product. The lucky winners were Fred and Janet Doody and their children Lewis and Grace, from Wolverhampton. Under the titles 'The Faces of Faggots' and 'The Faggot Family', they toured the country making personal appearances, including the BBC2 documentary Trouble at the Top and an appearance on The Graham Norton Show. The campaign was launched in 'National Faggot Week'.

Traditionally, faggots are served piping hot from the oven with mashed potatoes and garden peas, but chips and/or mushy peas are equally popular. You might also consider the following variations on a theme suggested by the manufacturer in 2005:

Finally, why not try making your own? Delia Smith minces up casseroled bacon, pig's liver and belly pork with onions, adds breadcrumbs, herbs and spices, then forms them into balls, and bakes them in stock.

1Another famous family of Brains established the Brains Brewery in nearby Cardiff, yet there is no known link between the two.