The European Peacock Butterfly Content from the guide to life, the universe and everything 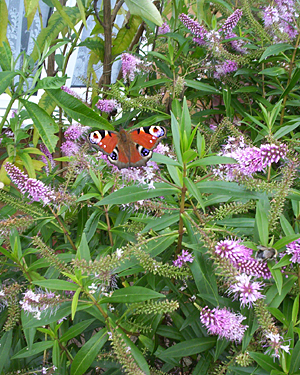 One of the many pleasures of having your own garden is watching delicate winged creatures come and feed from the plants you've nurtured. Butterflies are always welcome visitors, their colourful intricately-patterned wings proving nature wields the finest paintbrush. One of the most incredibly detailed is the European Peacock1 (Inachis io); it belongs to the Papilionoidea branch of the butterfly family tree, so it's a cousin of the magnificent Swallowtail. The Peacock butterfly is a common sight in British gardens and parks, and it can be found in most European and warmer Asian countries. Thankfully, it is not a species on the list of conservation concerns.

Peacocks have two sets of fluted wings decorated with patterned 'eyes' which act as a deterrent to predators. The eye patterns can appear to change colour depending upon the strength of the light. The wing base colour ranges from burnt orange to a reddish-brown. Each wing edge is bordered with a dark grey or brown outline. The outermost parts of the top wings feature a row of iridescent lilac-coloured flashes, streaks or blobs, giving the effect of a string of pearls draped over the upper eye pattern. When the wings are fully extended, four eyes can be seen from above, while their underneath is completely blank and dark. Some individual specimens have a yellow and black patterned flash between the eyes across the top wings, which must look quite alarming to potential predators flying overhead!

Warm sunshine wakes the adults from hibernation around springtime. They immediately set about finding a mate to begin the next generation. Peacocks are almost identical in appearance, although males are a little smaller than the female of the species: from wingtip to wingtip males average 65mm and females measure around 70mm. Once mated, the female seeks out a clump of stinging nettles and lays a batch of anywhere between 100 and 500 eggs on the underside of the leaves. The eggs are the same colour as the leaf they have been applied to. They can take up to a fortnight or possibly even as long as three weeks to incubate. The black larvae (commonly called 'caterpillars') hatch, eat their own shell as a first meal, then begin feeding on the nettle leaves. The caterpillar siblings stay together for safety and build a kind of web home made from their own silk.

Togetherness helps ward off predators: if they are threatened, the caterpillars all rear up and sway in harmony, making them appear to be one monstrous Medusa-like creature. If handled, they are known to excrete a sticky green substance, which is probably part-digested leaf matter. The handler assumes they have been defecated upon, and reacts instinctively to wipe their hand. The dropped caterpillar curls up into a ball then slinks off when the coast is clear.

As they grow the caterpillars will shed their skin as many as four times. Eventually the family separate and the individual caterpillars seek out a suitable place to pupate. The pupa is attached to a plant stalk or leaf stem and camouflaged to match its surroundings. About three weeks later, the adult Peacock butterfly emerges. Adults can live for up to a year; they overwinter against wood (log pile, fence, hedge and the inside of trees) or in a dark corner of a garage or garden shed, with their wings tucked together so they are unnoticeable.

If you'd like to see gorgeous Peacock butterflies visiting your garden, you can increase your chances of attracting them by planting specific flowers and herbs. These provide them with the nectar they crave. Known favourites are:

You can try planting any flat-headed or ball-shaped fragrant flower, as the nectar will be easily accessible for the proboscis2 of adult butterflies. Planting a variety of colour will give ample photo opportunities for you to capture a permanent reminder of your fleeting visitors during cold winter months. Don't forget to engage children in your activities; if possible, show them the various stages of a butterfly's life (without disturbing the hibernating creatures) to encourage them to carry on the good work in the future.

Adult butterflies like the blossom of the bramble bush before the fruit ripens. They are also partial to over-ripe and even rotten fruit, so it's helpful to leave a few of the blackberries for them, and any fallen, damaged apples on the ground. You should also leave a few patches of nettles for the females to lay their eggs if you'd like to welcome plenty of colourful guests to your garden in the following year.

The Peacock butterfly got its name from the fabulously flamboyant bird which has the same type of eye decoration upon its tail feathers. The peafowl Pavo cristatus is revered in Chinese culture, being widely regarded as an emblem of immortality, a belief which is thought to stem from the annual regrowth of its feathers. It is also the national bird of India.

There is a legend about how the peacock male became so well endowed plumage-wise. When the Greek goddess Hera3 discovered her husband's latest dalliance with the beautiful mortal maiden Io4, Zeus morphed Io into a gorgeous white cow then retreated to a safe distance. Hera commanded the multi-eyed Argus to guard Io the cow while she pursued her errant husband. The full story of Io and Argus has its own Entry, but the outcome was that after Argus had been killed on Zeus' command by Hermes, Hera placed Argus' many eyes in the tail feathers of her pet peacock.

Elvis Presley loved the eye pattern so much that he had stained glass featuring peacocks5 specially designed and installed in his home. Elvis' fans know that one of his famous jumpsuits is decorated with peacock images, which most impersonators have had copied. In some cultures an eye tail feather is considered unlucky, or at least, a bad omen. Some superstitious people won't bring a peacock image or a peacock tail feather into their home for fear of invoking bad karma. However, in Buddhism the peacock symbolises purity, and their tail feathers are used in purification ceremonies.

If you are thinking about puncturing your skin with tattoos but lack inspiration, then you'll be pleased to know that some tattoo parlours offer a range of designs based upon what Mother Nature bestowed upon Peacock wings naturally.

1They are not in the same genus as the American Peacock butterflies (Anartia) which live in sub-tropical and tropical regions.2Tubular sucking organ for food-gathering.3The chief wife of Zeus.4After whom one of the Galilean Moons of Jupiter is named.5The male of the species; only they have the eye pattern on their tail feathers.