Murray Walker - Commentator Extraordinaire Content from the guide to life, the universe and everything 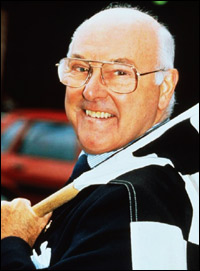 The name Murray Walker is known to all fans of motor sport. During his time as a commentator he covered almost every type of sport where an engine is involved, plus some without engines, from motorbikes to Formula One. However, what most people don't realise is that he only started commentating full-time once he retired from his day job at the age of 59.

Graeme Murray Walker was born on 10 October, 1923 at his home in Birmingham. He weighed in at a very respectable 9lb 12oz, and at one stage the labour was so difficult that the doctor thought that either mother or baby would die. In the end, both survived but his parents never tried for another child. His father was Graham William Walker, and his mother was Elsie Walker (nee Spratt). It was Murray's father who instilled a love of motor sport, and especially motorcycles, in him, as he raced motorcycles all over Europe.

At the age of five the family moved to Enfield in Middlesex, where Murray's education began with a governess at home. He then attended Highgate, a public school which his father had also attended. He left school with his School Certificate which he passed with credit. He was evacuated to Westward Ho! a year before war began, moved back to London as war failed to appear, then in 1939 went back Devon as war finally arrived. He stayed there until 1941, when it was time for him to go to war himself.

Murray was all geared up to go to war, and was accepted into a tank regiment, but was told that there wasn't any kit for him and that he should go off and do something else while he waited. While he waited he gained a scholarship from the Dunlop company, and was given tuition in all aspects of the company from advertising to production. The call-up came in 1942, however, and he headed into the army. The army is the reason why Murray has never taken a driving test in his life - all you needed was a certificate from the Regimental Technical Adjutant to be allowed to drive, and seeing as Murray's title at the time was Technical Adjutant to his regiment, he didn't find this too hard!

Murray trained as an officer in the army, and was eventually posted with the Royal Scots Greys with the task of being part of a convoy to Brussels. He saw his fair share of fighting, but managed to have fun too. He even met up with his father in the middle of Europe, as his father, who had found a job as a war correspondent, had set out with the express intention of finding his son. There was only time for a brief meeting, however, as Murray had to get back to the business of fighting a war.

At the age of 23, in 1947, Murray found himself back at home after the war. He became assistant to the Advertising Director at Dunlop, at which point he decided to follow in his father's footsteps and race motorbikes in his spare time. It didn't go according to plan, however, as he never managed to progress beyond club level. Instead, he was asked to commentate over the PA at various meets, which was the start of what would make him internationally famous and loved.

At this stage of his life, Murray had itchy feet for a change of job, and began work at the advertising agency Masius and Fergusson. While with this company, he worked on advertising slogans for Mars and Aspro, and was responsible for 'An only budgie is a lonely budgie.' The whole time he was working during the week, and dashing off round the country at weekends to commentate on race meetings. Once he married Elizabeth at the age of 36, she joined him on his weekend treks round the UK. He was working for both the BBC and ITV, covering motorcycle scrambles; however he did get the odd job covering a different sport - for example, he was once asked to cover a weightlifting competition. His double life finally ended in 1982 when, after working for a few different advertising agencies while covering motor sport for two television companies, he decided to give up his 'day job' to concentrate on his 'hobby'.

Murray began commentating over PA systems at motorcycle race meets1, before graduating to radio and television with the BBC and ITV. He covered almost every type of motor sport you can think of, but he is best known for his Formula One commentary. In 1978 the BBC decided to cover every Formula One Grand Prix in the season, rather than just a select few such as Monaco and Britain. This gave Murray a regular job with the BBC - every other weekend for the Formula One season he would commentate on the races from a studio in the UK. Only a half-hour highlights show of each race was broadcast then, and Murray had to provide the commentary for it.

From 1980 each race was broadcast live, and Murray had another pundit to help him - James Hunt. Hunt was well known as a Formula One driver, but had retired the year previously. Murray and Hunt commentated together for the next 13 years and provided some interesting moments as the two men were very different, and had wildly opposing styles of commentary. Murray always tried to make the best of a situation, while James's typical comment would be 'The trouble with Jarier is that he's a French wally, always has been and always will be.' The relationship between the two of them was strained at best, and Murray came very close to punching James mid-commentary at one point. However, as they worked together a mutual respect grew. The partnership came to an end with James's death in 1993. Murray was then joined by Jonathan Palmer until 1997.

A big change came in 1997 as the coverage of Formula One switched from BBC to ITV. Murray was sure 1996 would be his last year of commentary, but ITV asked him to carry on. Martin Brundle, ex-Formula One driver, was employed to be Murray's partner in the commentary box. Also in 1997, Murray was the subject of the television programme This is Your Life. It all came to an end in 2001, when Murray decided to retire gradually. He covered a few of the races that year, his last being Indianapolis. He had been commentating on Formula One since 1949, when there wasn't even a world championship, and the constant travelling had become too much. He retired at the age of 78 - however, he can still be found at at the occasional Grand Prix event each year and he still watches them all on television!

Murray Walker remains good friends with almost everyone on the Formula One circuit - he even believes that it was Bernie Ecclestone who persuaded ITV to hire him. During his retirement party at Indianapolis, Michael Schumacher duetted one of Murray's 'Murrayisms' with the man himself, and Murray was presented with one of the original 1911 Brickyard bricks.

Murray has recieved numerous awards, such as an Honorary Doctorate from De Montfort University, and a 'Bernie' (like an Oscar, only within Formula One).

Of course, all commentators make mistakes during live broadcasts, but Murray seems to have made more than most. Some of his bloopers have become famous in their own right, and some things he said, while not mistakes exactly, live on in legend.

Prost can see Mansell in his earphones!

Two laps to go and then the action will begin. Unless this is the action, which it is.

The young Ralf Schumacher has been upstaged by teenager Jenson Button, who is 20.

And now the boot is on the other Schumacher!

If Mika Hakkinen's going to do well he needs to pull his great big woolly Finnish socks up.

1He got his first commentary opportunity when his father, the regular commentator, couldn't make a race and Murray was asked to stand in.