An Introduction to Formula One Racing Content from the guide to life, the universe and everything 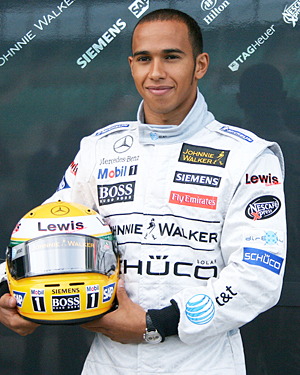 Formula One is the top level of open-wheel motor racing in the world today - it is also the one with the most history behind it. Its roots can be traced all the way back to the first auto races held in the late 1800s and early 1900s. There was a World Championship that was briefly held in the 1920s, though this is much different from the World Championship of today; the 'modern' era is considered to have begun in 1950. Since then, the sport has been growing steadily, with prestigious manufacturers like Ferrari, Lotus, Renault, Mercedes, McLaren and many others having made their mark, along with drivers such as Fangio, Clark, Hill, Schumacher, Ascari, Hakkinen, Prost, Senna and hundreds of others. Today, Formula One is considered by most to be the peak of automotive technology and driving skills.

A modern Formula One car is a single-seat, mid-engined machine with high amounts of 'downforce' and electronic aids for the driver. However, this has not always been the case: the modern car has evolved rapidly. In the 1950s, at the start of the modern Formula One era, the cars were front-engined beasts with large, wooden steering wheels made on low budgets with minimal testing and design improvement. The cars then progressed to low-slung mid-engined cars in the early 1960s with wings and other basic aerodynamic aids appearing at the end of that decade. Design then progressed rapidly into the 'wing car' concept that used aerodynamic engineering more and more efficiently to provide more grip on the track and higher speeds. From the 1980s onwards, it has been a constant battle between the regulators and the teams over the reduction of speeds through aerodynamic rules: the designers almost always win in the end, resulting in even faster cars. The design of a modern racing car takes hundreds of hours and the car is constantly upgraded and changed during the season depending on results from races and or testing to get the best out of it. One small change can make all the difference between winning and not even scoring one point.

It used to be, at the beginning of the modern era, that any wealthy man could purchase a car and race it himself as a privateer - a mechanic could easily work his way up to the driving seat. Nowadays, however, there are only a handful of drivers that race in Formula One, all of whom are greatly experienced in some form of racing, which leads Formula One to be considered 'the cream of the crop' in auto-racing talent. Many drivers in the past treated Formula One almost as a hobby and were not always in the best physical shape; they did little testing or setup work with the car and were often twice as old as most drivers are now, with slower reflexes to match. Drivers nowadays are picked from 'feeder series' such as Formula 3000 and such, and are very well trained and keep in great shape. They work out, test constantly with the cars and are media icons for their sponsors.

Formula One is by no means an individual sport. There have been people who have done more than one task, such as owned the team they drove for, worked as mechanics on their own cars and such, but there are always many people behind every driver. There is only one team that has been around for the complete modern era and that is Ferrari, although many teams have nearly as great a history. There are the likes of McLaren, founded by a New Zealand driver and winner named Bruce McLaren; Williams, which worked its way up from a small private team to a powerhouse; and Lotus, who (though it no longer races) set many a standard in the racing world. Some team engineers are more famous than their drivers, such as Flavio Briatore who has managed the Benetton/Renault team; Colin Chapman, the founder and designer of Lotus who was known for his amazing aerodynamic advancements; and Jean Todt, the man behind the resurgence of Ferrari in the late 1990s and 2000s.

There are many, many individuals who work even further behind the scenes. Some of the more modern teams employ upwards of 200 people in building the car, sponsor relations, pit crews, driver care and many other things. Formula One, though it centres around a small field of drivers, is really a team-based sport depending on entire organisations and not just the man in the car.

Formula One has progressed over the years from being held on true road circuits such as Spa-Franchorchamps and Rheims which were on public roads between villages, to custom-built race tracks such as the one in Sepang, Malaysia, that was designed purposely for Formula One. With safety becoming a bigger concern each and every year, the classic tracks have all but disappeared - replaced by safer, shorter tracks that are considered, compared to the tracks of yesteryear, more boring. Some older venues are still in use today, albeit in modified form. The Nurburgring is no longer 14 miles, but is a shorter and safer course, the old one having claimed the lives of five drivers. The only course still used today in almost its original configuration is the street circuit in Monte Carlo, Monaco, which has had only a few minor changes due to development of the principality. There is no one track in Formula One that is considered 'better' than others; all have unique layouts and characteristics that make them so exciting.

Engine technology has always been a scene of constant development, but it is showcased nowhere better than Formula One. Modern Formula One engines are so well made that they do not use gaskets - it is said that if you pulled off the cylinder head and disconnected the crankshaft on the upward swing of a piston, the force it nowadays wields would shoot it over 500 feet up into the air. This translates to about 850 horsepower at almost 19,000 revolutions per minute1. The engines are truly an engineering marvel and a long way from what now appear to be the rather cumbersome old V8s of the 1960s and the turbo engines in the 1980s that were developing a reported 1400 horsepower.

The Fédération Internationale de l'Automobile (FIA) are the rule-makers of Formula One. This organisation determines the technical specifications, driver licensing, the schedule and everything else one can imagine. The FIA has organised races since around 1904 and handles not only Formula One but also rallies, motorcycle and other types of racing. Each year, the FIA changes the rules slightly in an attempt to make the cars safer and in recent times also to slow Formula One cars down. They try and change the rules in such a way as to make the field somewhat even, so that competition is not restricted solely to the teams with the biggest budgets. They also try to encourage technical development, although one must remember that the FIA is, like any other organisation, profit-based and they make more profit by putting on the best show2.

Formula One is also known for the hi-tech equipment used not just in the cars. Computer modelling and control systems have been around for years now, improving in every season as electronics are made smaller and more versatile. High-precision machining tools are used in fabrication of the cars and high quality hand tools are specially built to maintain the finished cars. Wind tunnels, computers, jacks, wrenches, and even screwdrivers can make the difference in a winning team. In such a competitive sport, one must have the best equipment to be the best.

1The actual, exact numbers are not usually released to the public.2What constitutes the 'best show' is debatable, of course.