The Agen Prunes of Lot-et-Garonne Content from the guide to life, the universe and everything 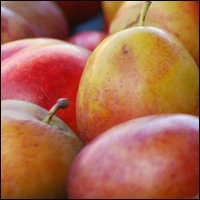 Do you remember prunes from school dinners? Although prunes are dried plums, these looked like pieces of coal: black, dry and shrivelled. But prunes don't have to be like that; they can be juicy, soft and sweet. Perhaps the best are Agen Prunes (Pruneaux d'Agen) from Lot-et-Garonne.

It was in the 13th Century that Crusaders brought damsons back from Syria in their booty. The monks of Clairac, near the town of Agen, crossed a damson with a local plum tree. They called the new variety Ente plums after the old French word 'enter', meaning to graft, as the damson needed to be grafted to stronger rootstock. In order to preserve the fruit throughout the year, they dried them in the sunshine at the end of summer.

Ente plums were soon growing throughout the surrounding territory. Later, the prunes were transported across Europe, via a canal which linked the Atlantic and Mediterranean. They were named after Agen, the town through which they were shipped.

Lot-et-Garonne is in south-western France, between the rivers Lot and Garonne. This is an area of gentle limestone hills, separated by stream valleys. Many of the hillsides are covered by orchards with neat rows of well-tended plum trees. They flourish here, as the climate is cool and wet in the winter, hot and dry in the summer. In springtime, you might think there was snow on the ground, such is the effect of their blossom.

Plums have been cultivated and dried since antiquity and their medicinal benefits were known to the Greeks. It is believed that the type of plum that is cultivated in Europe originated in China and spread along the silk route to the Mediterranean.

Ente plums are large and purple, with flesh which is sweet, juicy and golden yellow. At the end of August they cluster on the trees, ripe and drooping. The farmers arrive in their orchards with tractors and a device that looks like an up-turned umbrella. This closes around a tree trunk and shakes it gently, catching the fruit as it falls.

In the past, every farm would have had a prune oven for drying the fruit that the workers had collected. Nowadays the plums are taken to factories run by local co-operatives. The air fills with a sweet, sticky smell.

On arrival at the factory the plums are checked, and only those which meet exact specifications are accepted. They are then graded by passing them over a series of perforated grids, through which the smaller fruits fall. The plums are dried and the prunes are then stored in conditions which are carefully controlled. Agen prunes are re-hydrated by soaking them in water, to give the juiciness that makes them attractive.

Prunes are among the best fibre-rich foods. They are a source of vitamins A, B and E, although they contain less vitamin C than related fruits: nectarines, peaches and cherries. Their vitamin A content gives the body an anti-oxidant boost, and they are also rich in potassium. For regulating heart function and fluid balance in the body, potassium is essential.

In Britain, we tend to think of prunes as accompaniments for rice pudding, but they can be used in a range of dishes, both savoury and sweet. You can eat them for breakfast with muesli or yogurt, or serve them stuffed with cheese or walnuts as nibbles. How about duck and prune kebabs, or a tart with bacon, prunes and goats cheese?

Agen prunes are sold throughout France, either on their own, or incorporated in liqueurs, tarts, chocolates and other sweets. If you visit the area, be sure to return with prune apéritif (apéritif de pruneau); chocolate-coated prunes (pruneaux enrobés de chocolat) or stuffed prunes (pruneaux fourrés).