A Walk Around The Walls Of York Content from the guide to life, the universe and everything 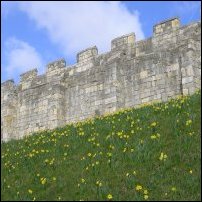 The centre of the city of York is surrounded by medieval walls, which can be followed for a pleasant walk. The circuit is about two miles long and takes about two hours.

In York, the gates in the walls are known as 'bars'. This is because many of the street names end with 'gate'1 so the entrances to the city were called bars to avoid confusion. The city has four main bars: Walmgate, Bootham, Monk and Mickelgate Bars.

History of the Walls

The walls and Bars were obviously built for the defence of York but after they were no longer needed for this purpose, the city authorities had little interest in trying to maintain them. In around 1800 they wanted to pull down the defences, but the king of the time, George III, refused to allow it. Therefore, they allowed the walls to decay, hoping that the situation would allow them to pull the walls down on the grounds of public safety. They demolished three of the four barbicans (see below) and a section of the walls where the rather attractive buildings of St Leonard's Place are now.

However, conservationists led by William Etty, a local artist, protested and were able to restore the section of the walls between Bootham and Monk Bars. This was opened in 1889 as a public walkway. The walls were repaired here and there and became Ancient Monuments2 in 1930.

A Word Before You Begin

The walls are open from 8am until dusk, when they are closed off by gates. They are open every day except Christmas Day, unless the weather is bad, in which case they may be closed off. A word of warning – the walls are not suitable for wheelchair users, due to the number of steps. Walking the walls is not difficult, but if you need a rest or just want to take a moment to enjoy the view, there are benches here and there along the circuit.

Each of the major points on the walls has an information board, giving some details about the history of that part and the area, as well as a map of the walls. It is also possible to pick up a leaflet on the walls from various York tourist spots.

If you decide to walk in the opposite direction to the walk given here, you will obviously need to reverse the directions. You can start at any of the locations given below, but for simplicity, the entry will begin with Bootham Bar. This is because it is probably the easiest to find, as it is very close to York Minster.

The site of this Bar has been an entrance to the city for millennia – Bootham Bar was built on the site of a gate in the walls of Roman York. The name dates from the 12th Century, meaning 'the Bar at the booths'. This referred to the market booths of a market near St Mary's Abbey, close by.

Over the road from Bootham Bar, you will see York Art Gallery (with a water feature and statue - of William Etty, in fact - outside it). To the left is King's Manor, part of the University of York but open to the public. The small tower and section of wall to the right of these buildings is not part of the city walls but instead was to protect the abbey of St Mary.

Go through the Bar, down the steps on the other side. There are public toilets here if you need to use them. Follow the road around to the left with the Art Gallery on your right. Pass the tourist information office and the Theatre Royal on your left. When you reach the crossroads, turn right onto Museum Street. Continue past the library and the entrance to Museum Gardens, both on your right. Walk to the near edge of the bridge.

Lendal Tower was built in the 13th Century. It has been used to pump water and is now private.

Cross the bridge. If you look to the left, you can see the riverside buildings of the city. The stone building on the left of the river near the bridge is the back of York's Guildhall. At the other end of the bridge, turn right to get back to the walls.

Opposite Lendal Tower is Barker Tower. At night, a chain was strung between these two towers to prevent any boats from sneaking into the city to avoid paying the toll. The tower was used as a mortuary for a short period during the Victorian era.

From here, follow the walls to the left. This section involves a small climb. Look to your right to see the Yorkshire Wheel (a smaller version of the London Eye, this is a large rotating wheel offering good views of the city) which is located next to the National Railway Museum. Look back for a good view of the Minster. Also note the stone war memorial with an obelisk.

Mickelgate Bar was the main entry to the city for visitors from the south and is the entrance used during royal visits. Elizabeth II used it for her visit to the city in 1971.

The Bar was built in 1169 and was also used to display the heads of traitors. Like Walmgate Bar, Mickelgate Bar was used as a house for many years. Today it houses a small museum which discusses the history of the city and the Bar itself as well as a tiny museum shop.

Go through the Bar (after a visit to the museum if you feel so inclined) and continue along the walls.

If you are looking into the distance rather than nearer at hand, you may not even notice you are passing over this gate. It is comparatively modern Bar, built in 1838 to help traffic enter the city and named after Queen Victoria. It was built on the site of a previous, much older gate, which had been referred to in records but not found until Victoria Bar was constructed.

Continue over the Bar and along the wall.

Baile Hill is the site of a Norman motte and bailey castle – the name comes from the word 'bailey' – built on the opposite side of the River Ouse from another castle, which exists today in the form of Clifford's Tower. The castle at Baile Hill no longer exists.

The rest of the wall which ran between Baile Hill and the river was removed in 1878 to build Skeldergate Bridge.

Built in around 1505, this was built on the site of an earlier tower to control access to the city from this side. Look up in the gateway and you can see where the portcullis used to run.

Go through the gateway and up the stairs on the right. Follow the walls around to Fishergate Bar.

This bar used to be much like the other bars, but is now one of the smaller bars in the wall circuit. This is because Fishergate Bar and its neighbour, Walmgate Bar, were both burnt in a 1489 riot caused by anger over tax increases. The damage resulted in Fishergate Bar being blocked up until 1827 when it was re-opened to provide access to a nearby market.

Fishergate Bar was used under Elizabeth I and her successor James I to imprison Catholics3 and lunatics.

The upper story disappeared in the 17th Century and its masonry was used to repair a nearby bridge.

Continue around the walls to Walmgate Bar.

Walmgate Bar was probably built in the reign of Edward I. It is the only Bar which still has a barbican. This was a defensive feature, an extension of the walls in a sort of box shape outside of the gate. Since attackers would have to go through the barbican to reach the gate, defenders could attack them from the walls of the barbican as well as the Bar. Walmgate Bar was badly damaged during the 1644 siege of York in the English Civil War. It was rebuilt in 1648.

The Bar has been leased out as a house since the 14th Century, and was occupied until as recently as the late 1950s. Now, the space is occupied by a small coffee shop.

Continue walking along the walls on the other side of the Bar.

This red brick tower was built in 1490 as a watchtower. A lake called the King's Fishpool had been created by damming the River Foss, on the orders of William the Conqueror. This meant that no walls were needed to block entry from this point, but it was still necessary to keep an eye on things, hence the tower. The fishpool eventually shrank and the resulting marshland was drained.

The lack of walls in this area means a short walk along the road is required to reach the next section. Turn onto the pavement on the main road and turn left, following the 'City Walls (Peasholme Green)' sign. After a few minutes, you will be walking alongside the river on your left. Shortly after this, the road crosses over the river. Cross over yourself, being sure to use the designated crossing points.

This section of the walls used to include Layerthorpe Postern, a large gateway used to collect tolls. However, it was demolished in 1829 when the bridge was rebuilt.

The section of the walk from here to Bootham Bar has good views of York Minster.

Just before you reach Monk Bar, you may notice an information board. This is to point out the existence, just outside the walls, of a domed, red brick building. The building is an early 19th Century ice house.

The name of this Bar originates from the monastic community which were based where the Minster now stands. The Bar was built in the 14th Century and is the tallest Bar, stretching as it does for four storeys. Monk Bar held prisoners in some of its smaller rooms, and is the only Bar to still have a working portcullis.

Monk Bar also has a small museum, much of it about Richard III.

Several of the fancier houses with nice gardens which you may observe on this section of the walk are occupied by the more important members of staff of York Minster, such as the Dean.

Congratulations, you have now completed a circuit of the walls of York.

1Because the names originate in the Viking period of York. To the Vikings, 'gata' meant 'street'.2A special status which provides the maintenance and protection of such buildings.3The English Reformation had changed the national religion from Catholicism to Protestantism.