The Idiot's Guide to Crossing the Road Content from the guide to life, the universe and everything 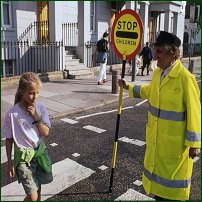 Crossing the road is an endeavour which almost everyone who walks anywhere at all will have to undertake at some time or another. In principle, it is as simple as walking (or cycling, rollerblading, pogoing, or whatever method you're using to get around) from point A, on one side of the road, to point B, on the other side1. However, there is a little more to it. Your objective is not simply to cross the road – it is to cross the road safely.

All children should be taught to cross the road safely, but there are instructions some adults would do well to keep in mind.

First, find a safe place to cross. Ideally, this is at a designated crossing point where the traffic will stop to allow you to pass. Examples include pelican and zebra crossings in the UK. There may also be a crossing point at traffic lights or on roundabouts. Some countries, including Ireland, Denmark and Korea even have a few pedestrian crossings which have a countdown timer showing how long you've got before the cars start again, or how long you will have to wait before the green man appears to indicate that it should be safe to cross. You may also find that some types of crossing will emit a bleeping noise to indicate to the blind and partially-sighted that it is safe, and some also have uneven, bobbly curb edges to indicate a crossing point.

If this is not available, find part of the road where you have a clear view to either side if at all possible. Try not to cross at a crossroads if you can help it, as it means you have to be aware of four directions of traffic instead of two. Be careful, as some roads have cars coming down them very fast, which may catch you off guard. Also, be aware that while you may have never seen a car on this stretch of road before, today might be the first time.

Sometimes traffic is heavy enough to make it impractical to wait until no vehicles are around. You will be forced to choose to cross whenever a suitable gap appears.

Once you have found a suitable spot, look carefully in both directions and listen for approaching traffic. Bear in mind that many modern vehicles are very quiet. If there are no vehicles on the road, cross quickly. Keep paying attention, listening out and checking in both directions as you cross.

How Not To Cross

Do not run. Don't follow the example of cats, which tend to make a go-for-broke dash across the road at top speed, leading to unfortunate amounts of feline roadkill.

Don't try to cross between parked cars. It makes it harder for you to see if the road is clear, and correspondingly difficult for drivers to see you, and the parked cars may also begin to move unexpectedly.

If you have been drinking, you are more likely to take risks that you would not take when sober.

Do not attempt to cross a major road such as a motorway or dual carriageway. These are not designed to be crossed by pedestrians and drivers will not be expecting you. In the UK crossing a motorway carriageway is illegal. In some places there may be designated crossing points such as bridges with footpaths.

It is very important to remember that if you are abroad, cars may travel on the opposite side of the road to that which you are used to, and other road rules may be unknown. Familiarise yourself with them if possible. Remember that although acting or driving in a certain way is the law, some drivers may ignore this. Some cities where foreign visitors are common may have signs on or near the road indicating which way traffic will come and which way you should look first.

Assuming you have reached the other side carefully, congratulations. If you are going to get hit, hope that it will be by something:

This rather depends on the age of the child. Babies and toddlers will probably either be carried across or will be in a pushchair. If the latter, be sure that you have time to get the pushchair onto the pavement before any cars are nearby.

Slightly older children can cross with you as long as you hold their hand tightly or they are attached to you by reins.

When they are old enough to begin to cross roads on their own, make sure they understand how to do so safely.

For some reason, crossing the road is also the subject of a number of jokes. These originated with the famous joke:

A number of variations followed.

Q:   Why did the [Insert animal of choice here] cross the road?
A:   Because it was tied to the chicken.

Q:   Why did the hedgehog cross the road?
A:   To see his flatmate.

Q:   Why did the chicken stop crossing the road?
A:   It got tired of everyone making so many jokes.

It is unclear why the humble chicken is often the star of these jokes, since most chickens are not in the habit of crossing roads.

1This entry will focus on crossing the road on foot.