The Pet Passport Scheme for Dogs and Cats Content from the guide to life, the universe and everything 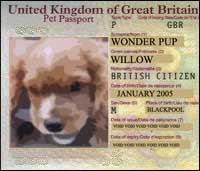 Until recently it was impossible to import your dog or cat into the United Kingdom, without the pet having to remain in quarantine for six months.

With an increase in the number of Britons purchasing holiday homes abroad, and the ease and affordability of travel to Europe, it was only a matter of time before the very strict quarantine regulations would be revised to allow pets to travel along with their owners for a holiday too.

However, a pet passport requires much more than a photograph and a paw print signature. The whole process takes a minimum of seven months to complete, and should ideally be started before you have even booked your holiday!

Quarantine was introduced in 1901 following a rabies outbreak that killed 173 people. It was also to help prevent the spread of disease and parasites found on the continent that had not yet reached the UK. Due to its long incubation period, it is rabies that dictates the need for the full six months quarantine. Since 1903, no one had died from rabies contracted in Britain, until David McRae a conservationist, contracted the disease in November, 2002 after being bitten by a bat. Since 1973, only one animal in quarantine has been found to have rabies.

There are many disadvantages to quarantine:

By order of the government, an advisory group led by Professor Ian Kennedy published a report on quarantine and rabies. The Kennedy Report was the beginning of the end of quarantine for dogs and cats, and the Pet Travel Scheme (PETS) was born.

A pilot scheme was introduced for a twelve month period, allowing a selected number of RCVS1 veterinary surgeons to participate in the Pet Travel Scheme. On 28 February, 2000, the first pet allowed into the UK with a pet passport was a dog called Frodo Baggins - the scheme was judged to be successful.

The scheme has been continually extended to include more countries since then. However it is worth remembering that it is not an export scheme - it simply means that animals fulfilling the PETS requirements will be accepted from the qualifying countries as eligible for entry into the UK without quarantine. Although it is called a pet passport, it would be more correct and less confusing to call it a UK Entry Visa2.

The rules governing the qualification of pets for the scheme are strict in order to protect both human and animal health, as well as reducing the risk of importing rabies into the UK. Animals not meeting all the rules must go into quarantine, as before the introduction of the scheme.

Taking your animal into some countries may require further guidelines to be met. Equally, pets from those countries not qualifying for the scheme are still required to spend six months in quarantine on return to the UK.

Initially the cost of obtaining a pet passport - and the subsequent renewal costs of the passport - may seem expensive, but they are nominal when compared to the high cost of quarantine fees.

There are several stages to the PETS process and entry into the UK; each one must be completed in the correct order otherwise the results become invalid and the process must be repeated.

A vet will organise all of the paperwork and ensure the correct procedure is followed.

Each cat or dog must be:

Any vet may perform some stages of the process, but only a government-authorised veterinarian (Local Veterinary Inspector) can verify that these procedures have been carried out correctly, and issue the official PETS certificate to the owner. The vet will let you know if they have an LVI to issue the passport or where the nearest one is.

The rabies vaccination (including boosters), blood-sampling, issuing the PETS certificate, the tick and tapeworm treatment and the issuing of the official certificate of treatment must all be carried out in the British Isles, the Republic of Ireland or a qualifying country. Microchipping can be done in any country.

An identichip (or microchip) is a pellet containing a computer chip that is injected by a veterinary surgeon into the pet between the shoulder blades. It has a unique number that can be electronically read, which confirms the animal's identification. When the pet is 'chipped', the owner details are recorded with a national company and only registered companies - such as vets, rescue centres and travel companies - can access those details via a passcode. The details cannot be forged, or changed without the original owner's authority. It is safer than a tattoo for identification purposes, as tattoos can be altered.

In order to make sure that each country has the same microchip-reader, the government has stipulated that only certain types of chip3 should be used for the PETS scheme. It also means that animals can be chipped in any country and still apply for a passport. If the chip used is not of that type, then it may be impossible to read it when the animal is checked in another PETS country. The owner would have to provide a microchip reader every time the animal travelled so the chip could be cross-referenced with the travel documents.

Before each of the following stages, the microchip will be read and recorded on all documentation, such as laboratory forms, to confirm the animal's identity and prevent any mix-up. Any procedures performed before the microchipping will have to be repeated.

An animal must be at least three months old before it can be vaccinated against rabies for the PETS scheme. Although the vaccine can be given as early as four weeks of age, it needs to be given later to ensure that the blood test results are not giving a false positive. For instance, if the mother has been vaccinated she may have transferred some temporary antibody protection to the offspring, which would show up on the blood test.

The recommended UK booster vaccination interval for cats is every year and for dogs it is every two years. However, in many other European countries, dogs are required to have the booster annually.

If boosters are given as required, then there is no need to repeat the blood test in subsequent years, but if the vaccinations lapse then the course and blood test will need to be repeated before another passport can be issued, waiting six months from the date that the blood sample is taken before being able to enter the UK.

A blood test must be analysed by a DEFRA recognised EUlaboratory. A successful blood test result must show that the rabies antibody titre is equal to, or greater than, 0.5 I/ml. This means that the animal's immune system has responded to the vaccination and will have protection against the rabies virus if it comes into contact with the disease. If the animal hasn't produced sufficient antibodies then it may not have enough protection to fight off the virus and would not be able to move onto the next stage of the scheme.

If a pet fails the blood test4, it will have to be revaccinated and the antibody titre retested.

Before pets are allowed to enter - or re-enter - the UK under the scheme, they must be treated against the fox tapeworm (Echinococcus multilocularis) and ticks to prevent a risk of potentially serious zoonotic disease coming into the UK. This treatment must be carried out every time a pet enters the UK.

The tapeworm treatment must contain praziquantel and be administered in accordance with the manufacturer's instructions. The tick treatment must be a veterinary product that has marketing authorisation in the country of use and is licensed for use against ticks. A tick collar is not acceptable. A veterinary surgeon will complete a form confirming that the treatment has been administered in accordance with the manufacturer's instructions, as well as verifying the time and date of administration.

A passport may only be issued for an animal to re-enter the UK if all of the following requirements are met:

The six-month delay is to allow time for any pets just infected with rabies at the time of blood sampling to develop visible symptoms of rabies before coming back in. If an animal was infected then it might show a similar result on the blood test to a successful vaccination response.

Providing that boosters have been given as specified, and then another passport can be issued by an LVI once the old one has expired.

The passport is due for renewal from the date of vaccination - not the date of issue, so the initial passport may need renewal after five months, which is when the rabies booster vaccination is due in cats. After that it needs to be renewed yearly (or every two years for dogs).

Animals must have been resident in the qualifying countries for six months prior to travelling to the UK. All dogs and cats entering the UK under PETS must use an approved transport company and be approved routes. A PETS transportation form will be supplied by the carrier.

The staff are experienced in animal transportation and familiar with the documents needed, as well as maintaining the security and safety of the animals in transit. If the paperwork is not completed correctly then the company will simply refuse to let the animal travel.

The number of countries that qualify for the passport scheme increases as members of the EU agree to abide by the terms and conditions of the scheme.

Some of the countries involved are; Denmark, Finland, France, Germany, Greece, Italy, Netherlands, Sweden and Switzerland.

The full list of current EU and non-EU qualifying countries can be found on the DEFRA website.

As qualifying countries may have their own particular entry requirements in addition to those of PETS, it is always advisable to check with the veterinary centre issuing the passport and visit the appropriate country's website to confirm requirements that may be needed.

Dogs and cats are not the only animals that qualify for PETS. More and more animals are being assessed for their suitability for enrolment in the scheme, and so the list of eligible pets will increase in time. For up-to-date details check out the PETS website.

1Royal College of Veterinary Surgeons.2Many countries are now accepting it as a safe import certificate due to the strict rules enforced by the UK that govern the issue of the certificate, so it has become used as an EU passport.3ISO Standard 11784 or Annex A to ISO Standard 11785.4The vaccine manufacturers anticipate that a percentage of animals will fail; the vaccination is said to be 96% reliable, hence the necessity for blood tests.