George Best - The Man, The Legend Content from the guide to life, the universe and everything 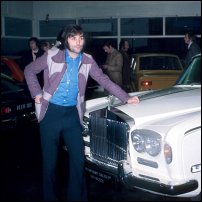 Life in the public eye had a great effect on George Best, as he was naturally quite a modest man. The most notable effect was his alcoholism, which cost him his playing career, and ultimately his life. However, despite his continual alcohol abuse problems, run-ins with police, domestic violence allegations and drunken public appearances, Best had many fans, who were won over by the cheeky and lovable image he had.

Best was born on 22 May, 1946, to parents Dickie and Anne Best. He had four sisters and one brother: Carol, Barbara, Julie, Grace and Ian. He grew up in Burren Way, in the Cregagh (pronounced Craig-ah) Estate in the Castlereagh1 area of East Belfast, Northern Ireland. His father, who worked in the shipyards, lived in the area until his death in April 2008.

Best's parents saw from a young age that he had a passion for football. He supported Wolverhampton Wanderers as a child, and played for the boys club in Cregagh. His mother said of her young son: 'With George it was always the ball!'

Best won a scholarship to Belfast's Grosvenor Grammar School when he was 11. However, the only sport offered at Grosvenor was rugby. After being caught skipping school, it was agreed Best should change to Lisnasharragh Secondary School. Here, reunited with friends from primary school and his favourite ball game, Best settled in with ease.

He displayed a great talent for the sport, and gained the attention of Glentoran, an East Belfast team. However, the club was reluctant to take him on due to his small frame.

I was the one who took football off the back pages and put it on to page one.
— George Best

Best has been described as the first of the 'showbiz footballers', as he attracted a lot of attention from all directions, receiving thousands of fan letters every week. Sought after for personal appearances, endorsements and modelling contracts, Best developed an impressive career both on and off the pitch. His long hair and good looks even earned him the nickname 'The Fifth Beatle'.

Best garnered intense media attention which put great pressure on his football career. He spent a lot of time at parties, drinking alcohol, and dating actresses, models and beauty queens. He also opened a nightclub and several fashion boutiques. These, however, were not a success. Throughout this, Best continued to be in the public eye, and this led to some negative press reports.

Former Miss World Mary Stavin made a keep-fit video with Best in 1984, called Shape up and Dance. Best was a successful commentator for Sky Sports in the 1990s, as well as being a popular after-dinner speaker.

Best was awarded the Freedom of the Borough of Castlereagh in April 2001. In December, 2001 he received an honorary doctorate from Queen's University, Belfast.

He married his second wife, Alex Pursey, 11 years later. She was a former air hostess and 26 years his junior. Alex Best blamed the breakdown of the marriage on having to be his carer, which led to a lack of sexual desire for her husband, something she later wrote about in detail in her autobiography and quoted in newspaper serialisation of her book. She was pictured drinking white wine at their home when Best was trying to get sober.

The couple separated in September, 2003 after the media reported that Best had been unfaithful, and pictures revealed he had started drinking again. The couple divorced in 2004. Alex appeared as a contestant on ITV's I'm a Celebrity, Get me out of Here! the same year.

Best's son Calum is a model and television personality, having appeared in ITV's Celebrity Love Island and Calum, Fran and Dangerous Danan in 2006.

Best and the Law

Best had more than one run-in with the law, many related to his alcohol abuse. He spent Christmas 1984 in prison - HMP Pentonville in London - after being convicted of drink-driving, assaulting a policeman and failing to meet bail. He got a three-month sentence, and an appeal failed. Best ended up playing for the football team in Ford Open Prison.

In 1991, eight months after his notorious appearance on Wogan, Best was bound over to keep the peace after assaulting a man in a pub in London.

He was forced to leave his flat in Chelsea in 1998. He had lived there since 1985, but owed several thousand pounds in mortgage arrears. Best left after being threatened with eviction.

He was convicted of another drink-driving offence on 3 January, 2004, fined, and banned from diving for 20 months.

I spent a lot of money on booze, birds and fast cars — the rest I just squandered.
— George Best

When, in 1990, Best appeared on Terry Wogan's BBC chatshow, he was obviously drunk and swore on camera. Although much-criticised for his behaviour, some blame must lie with the availability of copious amounts of free alcohol for upcoming guests in the hospitality suite (other chatshow guests also took part while inebriated, notably Oliver Reed on Aspel). Later, Best apologised and revealed that this was one of his worst periods of alcoholism.

Despite many attempts to stop over the years, Best continued to drink excessively, and his health deteriorated. He was hospitalised in 2000, suffering from liver problems. He then received a liver  transplant in July, 2002. Continuing to be a regular patron of his local pub in Petersfield, Hampshire, Best received much criticism as he openly drank alcohol following the transplant.

In October, 2005, Best was admitted to the private Cromwell Hospital in London with flu-like symptoms. He had developed a kidney infection as a result of the immunosuppressive drugs he was required to take following the liver transplant. Best spent three weeks in intensive care, with family and friends spending time at his bedside. Early editions of some morning papers reported on 27 October that Best's condition had worsened and he had said his final farewells to family and friends. However, his condition appeared to improve slightly.

In mid-November, 2005 his condition deteriorated. On 20 November the News of the World printed a photograph of Best in his hospital bed. It reported his final message to the world: 'Don't die like me.' Medical intervention was withheld in the early hours of 25 November, 2005 and he finally died of a lung infection and organ failure at 12.55pm. Best had fought to live longer than doctors had expected after treatment was ceased. He was 59.

During the weekend of Best's death, a one-minute silence was held before every Premier League football match.

The funeral was held on Saturday, 3 December, 2005, in the Great Hall at Stormont in Belfast. Best was buried alongside his mother in Belfast's Roselawn Cemetery, as he had wished. Despite the rain, an estimated 100,000 people lined the funeral route from Cregagh to Stormont to pay their respects to one of the most talented footballers the world had ever seen. Millions of people worldwide watched the funeral, broadcast live on the BBC.

A CD was released featuring songs performed by Brian Kennedy and Peter Corry at Best's funeral. The proceeds went to the George Best Foundation, which was set up by his family to aid research into liver disease. The songs are as follows:

The CD entered the top 20 in the charts, and the BBC reported that by 2 January it had reached number 11. It achieved large sales in Northern Ireland, and it is believed this is what gave it such success in the charts. Inside the CD cover is this message from Best's sister, Barbara:

The family would like to assure the public that George never took his liver transplant for granted. Through the George Best Foundation we aim to raise funds to carry out research into alcoholism and liver disease.

1The Castlereagh under-9 league has been renamed in honour of Best.