The US Two-dollar Bill Content from the guide to life, the universe and everything 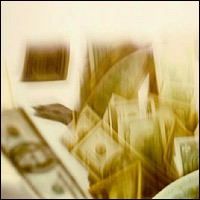 Some people think they're out of circulation. Others think they're all counterfeit. Some consider them collectable; others, merely oddities. The American two-dollar bill is a source of legend, confusion and activism.

The first two-dollar legend appears in many permutations, all of which might be true. According to one, a town in Rhode Island was repeatedly subjected to Navy servicemen on leave - something the natives disliked (think: drunken sailors stereotype). They complained heavily about how much they had to put up with. The Navy was irritated and before the next leave they issued all the sailors' salaries in two-dollar bills. For months afterwards the town was awash with twos. The locals got the message and never complained again.

Another two-dollar legend involves someone trying to pay for a product with a two-dollar bill. The cashier, who had never seen such a bill before, marks it as counterfeit and tells the purchaser to get out of the store. The purchaser insists that the bill is legal tender and demands to speak to the manager. Unfortunately, the manager is also unaware of the existence of the two-dollar bill, and has security called. In the most extreme tales, a telephone call to the Federal Reserve is required before the purchaser can get his hamburger or Discman.

On 25 June, 1776, the Continental Congress authorised the issue of two-dollar bills of credit 'for the defense of the America.' Only 49,000 bills were issued.

The next two-dollar bill was commissioned in 1862 with a profile portrait of Alexander Hamilton on the front. In 1869 he was swapped for his nemesis Thomas Jefferson. At this point, the two was considered a large note.

It continued to be issued at intervals for around 100 years, with regular but minor tweaks to the design. In 1886, the Treasury began buying silver from the booming American mining industry and issued silver-backed notes. The two was also issued as a silver certificate, and Mexican-American War General Winfield Scott took the place of Jefferson. In 1891 he was swapped for the Secretary of the Treasury, William Windom.

In 1896, the two bill hosted a collectable 'Educational Series' design. Windom was banished to make room for a classical allegory depicting science, commerce and manufacturing. The back was taken by portraits of Robert Fulton and Samuel Morse. In 1899, science was dismissed to make room for George Washington and the allegorical figures of agriculture and mechanics. In 1918, Jefferson returned, backed by a World War I battleship.

The bill was printed sporadically after that, and Monticello1 was added to the reverse in May, 1965. Finally, in 1966, it was officially discontinued due to 'lack of public demand'.

A mere three years later the Director of the Bureau of Engraving and Printing pointed out that printing two-dollar bills would save money, by reducing the number of one-dollar bills printed. This concept intrigued Uncle Sam, who launched a series of study groups to analyse 'the situation', most notably in 1974, when the Government commissioned Harvard Business School to 'evaluate the marketing feasibility of reissuing the two-dollar bill'.

After all this hemming and hawing, the Bureau of Engraving and Printing announced that 'the best interest of America' would be served by supplanting half the value of the one-dollar bills being printed with two-dollar bills. Also, the Treasury would save about $27 million over the course of five years.

So on 3 November, 1975, Secretary of the Treasury William Simon announced that on 13 April, 1976, the anniversary of Thomas Jefferson's birthday, the two-dollar bill would once again join the family of American currency. Because 1976 also happened to be the bicentennial of the birth of the United States, a special design was chosen. Jefferson was not dethroned in favour of Martin Luther King Jr or Susan B Anthony as some had suggested; however, Monticello was banished in favour of the famous John Trumbull painting of the signing of the Declaration of Independence.

1Jefferson's Palladian-style house, located near Charlottesville, Virginia.2As of 2008.3The co-founder of Apple Computer.