The Easter Bunny Content from the guide to life, the universe and everything 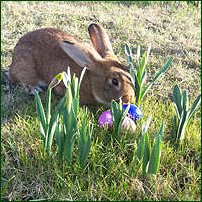 When Easter approaches and symbols of chicks, eggs and rabbits abound, do you ever wonder what the rabbit has to do with Easter and why he is often depicted carrying a basket of eggs?

History actually suggests that the Easter bunny was originally a hare. In pagan mythology, the hare represented love, growth and fertility. The hare and the egg were also the symbols of the spring and lunar goddess Eostre, from whose name it is generally believed that the word 'Easter' is derived.

In some ancient cultures, the hare was a symbol for the moon. Hares feed by night and have been observed staring at the moon when it is full. Their gestation period was also believed to be 28 days – the same as a lunar cycle. The lunar cycle, which represented the victory of life over death or spring over winter, was celebrated around the vernal equinox. That is why the date for Easter changes each year: it is based on the lunar cycle. The Council of Nicaea in 325AD decided Easter would fall on the first Sunday after the first full moon following the vernal equinox on 21 March.

So Why a Rabbit?

The rabbit has taken over from the hare, as it is far more common in many countries. Due to its reproductive proclivity, the rabbit is also regarded as a symbol of fertility. Eggs are also symbolic of new life and fertility, hence one of the reasons why the rabbit carries a basket of eggs. However, there are other myths that try to account for this.

Neither hares nor rabbits lay eggs, but hares bring up their young in 'forms'. These forms are hollows in the ground, usually located in fields and meadows. Hares make more than one form so they can divide their offspring among them for safety. Plovers have been known to take over a form as a nest in which to lay their eggs. One legend relates that a woman saw a hare leaving a form and upon investigation, she found a 'nest of eggs', which she consequently believed to have been 'laid' by the hare.

According to another myth, Eostre's hare was a large, handsome bird which she one day magically changed into a hare. Because the hare was still a bird at heart, it continued to build a straw nest in which to lay its eggs.

A German legend states that according to custom, a poor woman hid some coloured eggs in a nest for her children to find. As the children approached the nest, a hare hopped away and they therefore believed that the hare had brought the eggs!

The 'bunny' as a symbol of Easter was first mentioned in German writings in the 16th Century and introduced to American folklore in the 18th Century. Children would build a nest using their caps and bonnets, and if they had behaved, would be rewarded with a nest of coloured eggs.

Although nowadays the real reasons for Easter have become masked in commercialism, it is interesting to delve deeper and become familiar with some of the ancient traditions behind the confectionery symbols presented to us in modern society.