Chocolate Easter Eggs Content from the guide to life, the universe and everything 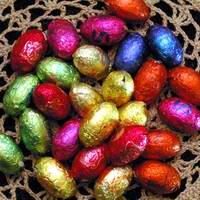 Outside its religious connotations1, Easter has traditionally been a time to celebrate the return of spring. Flowers are in bloom, the fields are full of new shoots and animals are giving birth left, right and centre. In order to celebrate this rebirth of wildlife, the clear end of the winter, a number of traditions have been built up regarding the giving of presents at this time of year.

There have been festivals to celebrate the arrival of spring in Northern Europe for centuries. The arrival of Christianity in the first millennium AD heralded the integration of these festivals into one celebration called Easter in order to appease the newly converted. Some of these additional traditions have continued to the present day. Easter eggs are one of the continuing traditions, though they have taken many forms over the years. An ordinary bird's egg given as a gift has been around for thousands of years and even as long ago as the Middle Ages, eggs were painted gaudy colours to give them further meaning as a gift. As chocolate was becoming more widespread in the 20th Century, a chocolate version of the traditional egg was developed. These hollow ovoids of chocolate have become larger as time has passed and more represent Ostrich2 eggs than any you might find where the traditions originated. Chocolate eggs have become increasingly elaborate as manufacturers tempt people to buy their eggs. They have increased the size of the eggs and often associate them with brands of less seasonal chocolate. Other gifts may also be included with the egg, including egg-cups, egg-timers and mugs.

The move towards chocolate eggs also heralded a trend towards the commercialisation of Easter. The heavy marketing campaigns used to sell chocolate eggs also put greater emphasis on the role children play in the festival. The increasing emphasis on children along with an attempt to fuse the idea of a rebirth of life in spring with the giving of eggs as gifts has led to new traditions and characters such as the Easter Bunny. The Easter Bunny supposedly delivers Easter eggs in much the same way Santa Claus delivers presents. The eggs are typically hidden and form the basis for a game.

Though Easter eggs are only widely available for sale in the run up to Easter and at a discount in the immediate aftermath, this does not necessarily mean that they cannot be eaten at other times. It is quite possible for Easter Eggs to last well into the year, and some have been known to be consumed within sight of Christmas3.

The sale of Easter eggs in the UK is dominated by three companies - Cadburys, Nestlé and Mars control the vast majority of the market. Some of the more popular ones are:

Some people are not content with simply making themselves ill from all the over-indulgence related to consuming Easter eggs. Instead, prior to consumption, they may engage in the following activities:

Eggs are personalised so that they are distinct from one another and thus recognisable. A competition then takes place between people with eggs as to how far they can roll them. This most often takes place on a hill or lawn, but can be carried out anywhere with enough space5. The winner of the game is the person who rolls the egg the furthest without breaking it.

Engaged in by those with a particularly deft throwing style, egg throwing has a similar objective as egg rolling, requiring the participant to launch their ovoid skywards in the attempt to reach the furthest distance without breaking. Given the natural fragility of eggs when faced with the impact of something hard, the winner of such a contest more often achieves the distance by fluke than by design.

More often engaged in by those of an adolescent nature around Eastertide, egg throwing follows a simple procedure. Firstly select a number of eggs6, then select an appropriate target. Finally throw the eggs at the target. This works best if said target is either inanimate, or someone the egg-thrower knows and can laugh at. Throwing eggs at someone you don't know, or someone who won't find the egg throwing funny, is extremely dangerous. Especially as they may be tempted to prosecute you for assault as a result.

The eggs are usually hidden either on the evening before Easter or on Easter Sunday itself by the Easter Bunny7. The eggs could be hidden in a number of places, though the most popular seem to be around the house, in gardens or in some public place such as a park. Children are then released to go hunting for the eggs. In some versions of the game they get to keep as many as they find whilst others emphasise fairness and have the total eggs split up between the participants. The eggs are then consumed as messily as possible, this is why it is better to conduct this game outside.

1In the Christian calendar, Easter represents the time when the Son of God rose from the dead.2A large flightless plains-dwelling African bird with very large eggs.3Though in the opinion of some Researchers, this is deemed a great misuse of an opportunity to eat lots of chocolate.4Trivial fact: the miniature version of these are the most highly consumed confectionery between January and Easter, partly due to the highly successful advertising campaigns and the tagline - 'How do you eat yours?'.5Be prepared to wash the smashed eggs out of the carpet if you decide to conduct it indoors though.6Raw eggs are best as hard boiled ones a) hurt and b) don't have quite the same squishy satisfaction when they hit something.7If the Easter Bunny is unavailable this job may be undertaken by some relative of the children taking part in the hunt.