Aloe Dichotoma - the Quiver Tree Content from the guide to life, the universe and everything 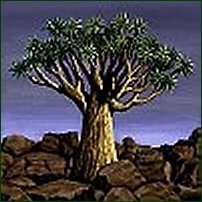 The quiver tree is a remarkable large, tree-like species of succulent plant that occurs in the dry desert and semi-desert regions of South Africa and Namibia. It is indeed one of the biggest members of the genus Aloe and is well known to succulent enthusiasts.

Aloe is the genus name for all the species of aloe. The species name, dichotoma, means 'divided in two' and refers to the way the branches divide, repeatedly forking in two. This is one of the most branched and tree-like species of aloe.

The name 'quiver tree' comes from the habit of the San People, or Bushmen, of using the branches of this aloe for making quivers to contain their poison arrows. This tree doesn't have real 'wood' but a much softer pulpy, fibrous tissue in the trunk and branches. Consequently, branches can easily be hollowed out. A hollowed-out section is then closed off at one end with a piece of leather; leather straps are fitted to it so it can be slung over the shoulders, and voilà – a quiver!

This species is one of only a few species of aloe that reaches tree proportions: it can grow to 7m in height. Yet at close inspection it is still clearly an aloe, with a rosette of pointed, thickly-succulent leaves, bearing a margin of thorns, at the tip of each branch. These rosettes at the tips of the forked branches usually form a dense, rounded crown.

The leaves are about 30cm long and 5cm wide, somewhat bluish-green in colour, and arranged in a spiralled rosette in old plants, but in young plants, neatly arrayed in four vertical rows. Unlike in the single-stemmed tree-like aloes, in this species the old dry leaves drop off so that the leafy rosettes only remain at the tips of the branches, leaving the rest of their length clean.

The stem can get quite stout – more than a metre in diameter at the base. It is covered with thick, corky, yellowish bark that flakes into sharp-edged sections on the main trunk, but remains smooth and whitish on the branches. Typically, the trunk tapers from a thick base towards the top, with the first branches appearing about halfway up.

The flowers appear from June to August – this is wintertime in the Southern Hemisphere. The inflorescences arise from amidst the rosettes at the tips of the branches, and are fairly short and carried erect. They branch into three to five racemes, bearing the yellow flowers. The flowers are rather short and rounded in shape, compared to other aloe flowers.

This is essentially a desert and semi-desert species. In South Africa, its distribution is centred on the lower reaches of the Orange River, from the region of Kuruman till where the river discharges into the Atlantic Ocean. In the western part of the Northern Cape Province, it spreads a bit southward from the river into the region known as Namaqualand, of which many people consider it to be characteristic. In Namibia, this species occurs in a wide swath from the Orange River northward to about the Etosha Pan. It is missing from the extremely dry coastal regions of the Namib Desert, as well as the sandy inland Kalahari Desert, preferring uneven, stony country. In this landscape it is usually one of the most conspicuous tree species, having made an impression on visitors as far back as Governor Simon van der Stel in 1685, and even today it is still a favourite with tourists.

Apart from their use by humans for arrow-quivers, these trees are important components of their local ecology. Many insects, animals and birds are drawn by the copious nectar of the flowers. Baboons will climb in and tear the flowers off the trees in masses to get at the nectar. Furthermore, the trees, because of their size, are used as nesting sites for sociable weavers, Philetarius socius. These small weaver-birds gather in large flocks inhabiting single, gargantuan mass-nests. They live in the same desert regions and their distribution is almost exactly the same as that of the quiver tree. Their collective nests look like huge haystacks somehow flung into the trees. The entrances to the individual 'apartments' are at the bottom, shaded by the mass of grass above, to keep them cool in the desert days with temperatures that can exceed 40°C.

Like most other aloe species, quiver trees are not hard to grow from seed. They will grow best in regions with a climate close to that of their native deserts – not too cold, and not too wet. They can grow outside in areas with rainfall in winter, or summer, or throughout the year, only provided there's not too much of it. They can take a few degrees of frost in winter as well, but prefer hot summers. Quiver trees can be used as focal points in rock gardens, amidst other suitable succulent and drought-adapted plants. They grow slowly, but not agonisingly so – being able to increase their height by 10 - 20cm per year under favourable conditions. They might be kept in pots first, and transplanted to bigger beds when they reach 30 - 50cm in height.

These strange trees are fortunately still abundant in many parts of their distribution; in some places forming quiver tree 'forests' with an alien ambiance. However, there have been local die-offs, sometimes caused by a drop in the water table, perhaps due to the overuse of borehole water by farmers. Another possible reason might be global warming leading to local climate change - either in the form of an increase or decrease in rainfall. Also, unscrupulous collectors have removed large numbers of adult plants from their habitat and transplanted them into suburban gardens. Removals are not always successful, especially if they are replanted in unsuitable climates. For this reason, the species is currently protected by law in South Africa. It is illegal to remove plants from the wild, and also to collect their seeds without a special permit. People interested in growing this wonderful species can obtain seeds from Silverhill Seeds, a company operating from South Africa.