The Wellington Statue, Aldershot, Hampshire, UK Content from the guide to life, the universe and everything 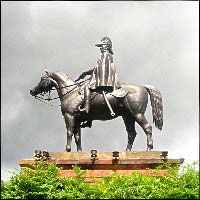 You'll be lucky to spot it nowadays. If you're driving north on the A325 at Aldershot, just past the roundabout by the Travel Inn, and you remember to look to your left, you'll catch a split-second glimpse of the UK's largest equestrian statue. Since it was installed there on a small round hill in 1885, the trees around it have grown to almost completely obscure it from public view. When it was on the skyline, soldiers would have marched past, and no doubt saluted it, on the route between their barracks and the training grounds. To see it properly, you should have turned left at that roundabout and followed some brown signs. From the car park at the foot of the rhododendron-planted knoll, the statue's imposing profile is revealed in all its martial glory.

The horse is Copenhagen and the rider is Arthur Wellesley, aka the first Duke of Wellington. In fact, his real name should have been spelled Wesley, somehow making it more incongruous that this British war hero and Prime Minister was an Irish-born Catholic. A privileged one, though: Arthur was the third surviving son of the somewhat impoverished Earl of Mornington, and one for whom an army career was the only choice.

A pretty good choice, too. Wellesley made his name in India in the second Anglo-Maratha War1 in 1803, then turned his attention to Europe, capturing Copenhagen2 in 1807, before engaging the French in the Peninsular War in Portugal and Spain. With each victory came a new honour: a knighthood after the battle of Argaum, promotion to lieutenant-general after Copenhagen, a viscountcy after Talavera, promotion to field-marshal after Vittoria, eventually culminating in his dukedom after the defeat of Napoleon at Waterloo in 1815.

It was an age of war with Europe, and the victorious were handsomely rewarded not only with gongs but estates and permanent memorials too. Marlborough had Blenheim Palace. Nelson stands atop a massive column in Trafalgar Square, but what of Wellington? Unlike Nelson3, Wellington survived his greatest triumph. Not wishing another Blenheim, he opted for the relatively poky estate of Stratfield Saye in Hampshire, but a memorial was always going to be tricky for this still-active politician who never courted publicity.

Apsley House was his London home, lying opposite Hyde Park Corner, and it was there that a grand victory arch was constructed. Its architect, Decimus Burton, had planned to top it with a figure of Victory in a four-horse chariot, but he wasn't consulted over the figure which was eventually put there. In 1838, the Duke of Rutland formed a committee and raised the sum of £14,000 for a permanent memorial for Wellington, the great national hero. The result was a colossal equestrian statue by the somewhat controversial sculptor Matthew Cotes Wyatt. Of its size, it was said that it was possible to hold a dinner party inside Copenhagen's hollow belly. On 28 September, 1846, with grand ceremony, the 30-feet-high, 40-ton statue was loaded on to a specially-constructed wooden carriage and dragged from Wyatt's workshop to Hyde Park Corner by 29 laurel-crowned horses, escorted by 500 guardsmen. It was hoisted into place the next day, and finally fixed to the masonry on 1 October.

When the scaffolding came down, it was apparent to all and sundry that it was ridiculously out of scale. Not only that, but it was the wrong horse. Copenhagen had died ten years before, and Wyatt had modelled the charger on another, named Rosemary, with different-shaped ears. At least Wellington was authentic - he had sat for the sculptor - but it didn't disguise the fact that this was a construction fiasco of Millennium Dome proportions. Punch magazine had a field day, dubbing it 'The Archduke'.

Everybody hated it. Burton hated it to the extent of leaving £3,000 in his will towards its removal. The Government wanted it moved too, but Queen Victoria, despite the fact that she loathed the way it dominated Buckingham Palace Gardens, wished to respect Wellington's feelings, and decreed that it should remain in place. The public started to get used to the statue, and it remained after the great man's death in 1852, lasting another 30 years before its downfall - increasing traffic congestion required a widening of the road.

The arch was dismantled and moved, but what of Wellington? After much consternation, he was finally given the boot by the Prince of Wales4 in 1883, who decided to pack his statue off to Aldershot 'where it will be highly regarded by the Army'. The monument was cut into six pieces, decapitating the Duke himself, and the tricky removal job was undertaken by Pickfords. It is fanciful to think of his body parts being stacked on to the van between the sofa and the chest freezer, but in fact this was another bespoke contract: 16 horses pulled the 12-feet-wide trolley to rural Hampshire in four days. Wellington was eventually re-erected on his current site, Round Hill, and handed over to the care of the Army with great pomp and ceremony on 19 August, 1885.

Other Wellington memorials grace towns throughout the United Kingdom and beyond, but the fortunes of these have declined somewhat, mirroring that of the British Empire as a whole. There are estimated to be around 60 memorials, a flavour of which follows:

Maybe his legacy will live on longer in his eponyms. We wear his boots in wet weather, and we eat his baked beef dish. We have honoured him in naming a Sequoia tree, as well as the capital of New Zealand. He's the lead guitar-playing Womble, and his greatest military victory is thought by many to be the greatest Eurovision Song Contest winner.

If you ever pass Aldershot, please pay your respects. Recent restoration and floodlighting has secured his future for many years to come, through the care of the Friends of Aldershot Military Museum. Throughout the statue's farcical journey, the face of a national hero has remained resolute in his pose; an arm indicates the advancing Prussians and with it the downfall of the French Empire. An Iron Duke in bronze, fashioned from captured French cannons.

1Wellesley successfully commanded an outnumbered British force at Assaye and Argaum.2Wellesley's forces were sent to prevent the Danish Navy falling into the hands of Napoleon.3Who, as every schoolboy knows, died at Trafalgar.4Later became Edward VII when his mother, Queen Victoria, died.