Evil Eye Lounge, York, UK Content from the guide to life, the universe and everything 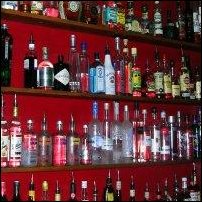 Evil Eye Lounge, or Evil Eye for short, is a popular bar in the centre of York. However, it's more than that: it also serves food, and has an Internet café and shop. At the time of writing, Evil Eye is undoubtedly a contender for the coolest place in York. If you don't believe that, it may interest you as a potential customer to know that superstar actor and epitome of cool, Johnny Depp, was apparently spotted in the bar while in York filming Charlie and the Chocolate Factory.

Evil Eye is located on Stonegate, one of the main shopping and drinking streets in the city centre. It runs between St Helen's Square and Petergate, which runs alongside the Minster. Evil Eye is about halfway along.

On the ground floor, next to the entrance, is a small shop selling all kinds of alcohol. Entry is through the shop during the day and through a small alley on the left during the evening. Behind this is the main bar area, containing a few computers which customers can use for a small fee. The bar itself, which is usually crowded, is long with brightly painted panels. In front of the bar are a few stools, and behind is every type of alcohol imaginable. The ground floor also has a small patio area.

Up the narrow, crooked steps to the first floor is a room with possibly Evil Eye's best feature: two beds - yes, you read that correctly, beds. These are wooden, intricately carved and arranged opposite each other. They are covered in cushions which makes them perfect for sipping your cocktail with friends. During busy times they are usually occupied, but there are also a few benches and tables.

On the second floor are more computers, and tables and seating for customers. Of course, having the computers in the same areas does mean that the drinkers can see what the Internet users are doing, which can be amusing - if a little disturbing - when they are looking at somewhat adult videos.

Up the stairs again are the kitchen and toilets, and another room with tables and seats, many of which are leather-covered armchairs and sofas. There is a further floor above this, but for staff only.

The decor is neither like a homely, old fashioned pub nor a chic and sophisticated wine bar. Instead, it is decorated in East Asian style, giving the bar a more bohemian, raw feel. Contributing to this feel are the wooden floors, colourful walls and ornaments. Also notable are the many mirrors; there are even quite a few in the toilet cubicles! Most of Evil Eye's mirrors are large, wooden and decoratively carved, sometimes painted in gold. The furniture is also made of wood, with the exception of some very comfy leather armchairs and some metal tables and chairs on the ground floor and patio. A gallery of pictures can be found on the bar's website.

The atmosphere is relaxed and friendly, but it is not really the place to go for a quiet drink; York has plenty of excellent pubs if that's what you're after. Evil Eye is usually busy as it is popular but not particularly large. It is often used as a place to get one drink before heading elsewhere, such as to a club. Part of the reason for this is that many of its customers are students and younger drinkers who can't really afford to buy cocktails all night. There are cheaper cocktail bars in York, but none of them are as highly-regarded or have such a range.

The range of drinks in Evil Eye is phenomenal. Luckily, there are plenty of menus at the bar. It serves a huge number of cocktails: standards such as Martinis and Manhattans as well as the bar's own concoctions. While much of the drinks menu consists of cocktails, other drinks are served, from wine, shooters, tea, spirits and beer – bottled, not pints – to something more unusual like mead, sake or 89% Balkan vodka. A board above the bar proudly boasts that one of its drinks, the 'Hellshot' was banned by the local authority for being too dangerous. This is not surprising, considering that it was a mix of 88% vodka and 89.9% absinthe. For teetotallers, Evil Eye also serves non-alcoholic drinks, including a range of chocolate drinks.

Aside from drinks, Evil Eye also serves food. While it could not really be called a restaurant - drinking is the main focus in the evenings - it serves Thai food from midday until 9pm every day, except Sundays, when a large Sunday roast is put on from midday to 6pm. You can choose from lamb, beef, pork or vegetarian; it also comes with a real homemade Yorkshire Pudding. The roast is available in three sizes, but unless you have an enormous appetite, you probably won't need the 'Monster' size.

Evil Eye's staff have an impressive memory of the complicated and lengthy drinks menu and service is usually good and friendly, even if there is often a bit of a wait due to the queue at the bar.