Roy Orbison - Singer/Songwriter Content from the guide to life, the universe and everything 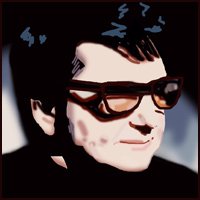 Roy Orbison: Rock'n'roll legend. 'The greatest singer in the world', according to Elvis Presley. Blessed with an unmistakable, flawless tenor voice that could effortlessly climb 3½ octaves1, Roy wanted nothing more than to be a singer.

Roy Kelton Orbison was born in Vernon, Texas, on 23 April, 1936, the second son of Baptists Nadine and Orbie Lee Orbison. Roy's father taught him to play the guitar by the time he was six years old. By the age of eight he was singing country songs on his local radio station. By his late teens he had performed in practically every dance hall in West Texas. He was also a gifted songwriter and guitarist. Roy married Claudette Frady in September 1957 and the couple had a son, Roy Dwayne Jr in 1958, followed by another boy, Anthony King, in 1962. Roy wrote the song 'Claudette' in his wife's honour; it was recorded by The Everly Brothers on a double-A single with 'All I Have To Do Is Dream' and it reached number one in the UK charts in May, 1958.

After signing with Sun Records in 1959 on the advice of his friend Johnny Cash, Roy's first recording success in the US was 'Ooby Dooby'.

I was frustrated as a singer for a long time, particularly when some friendly rivalry broke out between me and a young guy in Texas named Buddy Holly, who, within a couple of months, had a couple of number one singles and soon had stardom that reached to the Moon. I tried not to take it too hard but when 'Only the Lonely' happened in 1960 I reckoned it was about time too. I was an avid follower of the charts. I lived by them until 'Only the Lonely' - and then I didn't look at them anymore.

In 1960 Roy and his family moved to Nashville and he signed with Monument Records. He scored a string of solo hits in the UK in the early 1960s, including three chart-toppers:

Roy toured England three times in 1963. Just before one of the UK appearances, he forgot his normal spectacles and had to go on stage wearing his prescription shades. So it was in the UK that an iconic image was born, and Roy maintained it for the rest of his career.

Roy became friendly with The Beatles and encouraged them to tour America.

I thought maybe in 1964 I could have been swamped by The Beatles, but it turned out the other way round and I was voted number one vocalist in 1965.

Roy toured with The Beach Boys in 1964, and Claudette gave birth to their third son, Wesley, in 1965. The Rolling Stones served as Roy's warm-up band in Australia in 1965. One of Roy's loves was motorbikes, but he had bad luck with them. During an English tour in March 1966, he was involved in a motorcycle accident and was nearly killed. He performed the rest of his tour seated on a stool, due to a broken ankle.

Three months later, on 6 June, 1966, Roy and Claudette were setting off on a motorcycle holiday when a truck driver pulled out in front of her bike2. She died in his arms an hour later, at just 25 years old. Roy was devastated to lose his beautiful wife. The tragic lyrics and haunting melody of 'Too Soon To Know', which reached number three in the British charts just two months later, still tug at the heartstrings four decades on.

After artists are signed to a label, they are at the mercy of the owners who like to milk their cash cows for all they are worth. Take for example Elvis Presley. The rising superstar singer was desperate to do some serious acting, but the films in which he was cast were insipid musicals - Elvis the hero would win the day, always get the girl(s), and occasionally break into song and dance. Critics were rarely impressed, but the magnetic Elvis had a Midas touch which made him box office gold, and more mediocre films of the same genre were churned out.

The same method was attempted with Roy Orbison when he had signed up with MGM. In the 1967 musical western The Fastest Guitar Alive, Roy played Southern spy Johnny Banner, who carried a bullet-shooting guitar. His job was to steal gold bullion from the United States Mint in San Francisco to help finance the Confederacy's war effort towards the end of the American Civil War. While it is fair to say Roy was no Elvis in the sex-appeal department, all of the songs from the soundtrack were written by Roy Orbison and Bill Dees. These saved the film, but sales of the soundtrack album still did not recoup the studio's losses. The Fastest Guitar Alive was, thankfully, Roy's only film venture, and he returned to doing what he did best.

While Roy was away touring in England, on 15 September, 1968, his two older sons Roy Jr and Anthony were killed in a fire at the family home. The youngest child, Wesley, was saved from the fire by Roy's parents. It's hard to imagine how anyone could recover from such overwhelming and relentless tragedies in their life.

On 25 March, 1969, Roy married German Barbara Jakobs in Nashville and they had a son, Roy Kelton Jr in 1970. During the 1970s Roy was reduced to living off royalties from his previous hits and playing the odd gig in the occasional nightclub. His contract with MGM ended in 1973, and he struggled to compete with the glam rock and punk music which dominated that decade. Barbara gave birth to Alexander Orbie Lee Orbison in 1975; he is now a drummer in the band White Starr.

A lifelong smoker, Roy had triple heart bypass surgery in 1978, and he recovered sufficiently to accompany The Eagles on their Hotel California tour in 1980. During the first half of that decade Roy's music seemed out-of-date and unfashionable, although he still retained a diehard fan base who followed him everywhere. He was particularly popular in the UK and made frequent appearances in small clubs.

Whether I'm in London, Sydney or Hong Kong, it makes no difference. There is always someone who knows me. I must be one of the most unloneliest people in the world.

Roy and his family moved from Nashville to Malibu, California, in 1985. 'In Dreams' was used on the soundtrack of the 1986 David Lynch film Blue Velvet, bringing Roy's music to the attention of the world all over again. David Lynch used Orbison songs in his films more than once. He'd originally planned on using 'Crying' rather than 'In Dreams' in Blue Velvet, and eventually did use it (in a somewhat overwrought Spanish-language version) in Mulholland Drive.

Roy was inducted into the Rock and Roll Hall of Fame in 1987 by a visibly nervous Bruce Springsteen who made a tearful, emotional speech, and then gave Roy a manly hug after presenting the award. Even 'The Big O', who said he had spent his career trying to appear 'cool', was overwhelmed. Roy's career peaked again with his 1987 album In Dreams: The Greatest Hits.

'Cryin' was covered by Don McLean in 1980 and was a phenomenal success. In 1988 Canadian singer kd Lang, who has been compared to Patsy Cline, agreed to record the song with her idol Roy for the soundtrack of the film Hiding Out. Although it was not written to be performed as a duet, they sang alternate lines and it scored a chart success. The duo received a Grammy for their collaboration.

Roy was working on the album Mystery Girl when a single song collaboration with George Harrison and Bob Dylan called 'Handle With Care' culminated in the formation of The Traveling Wilburys, a country rock group. Old friends Tom Petty of The Heartbreakers and Jeff Lynne of ELO completed the hugely talented line-up. Roy's nickname in the band was 'Lefty Wilbury'.

Roy's singing is unmistakable on the first album Volume One, which provided the hit singles 'End of the Line' and 'Not Alone Anymore', as well as 'Handle With Care'. The band were touring when Roy suffered a massive heart attack at his mother's home, causing his untimely death on 6 December, 1988, at the age of 52. His lifeless body was found by his brother Sam, who had worked for Roy since 1975. Sam Orbison continues to play a significant role in perpetuating the memory of his legendary sibling.

In 1989 Roy was posthumously inducted into the Songwriter's Hall of Fame. In 1991 Roy's widow Barbara produced the Roy Orbison Tribute at the Universal Amphitheatre in LA which raised over $1million for homeless people in Los Angeles. In 1998, Roy was honoured with a Grammy Lifetime Achievement Award.

By 2006, the CD The Essential Roy Orbison was a top 20 best-selling album in seven countries. On 31 October, 2006, a DVD called In Dreams, featuring interviews with over 20 fellow artists including Bono, Robert Plant, kd Lang, and Barry and Robin Gibb, was released to critical acclaim. It concentrates mostly on extolling Roy's talent as a songwriter, but includes footage of Roy singing his own greatest hits: 'Only the Lonely', 'Claudette', 'Dream Baby', 'Pretty Woman', 'It's Over', 'Crying', 'She's A Mystery To Me', 'You've Got It' and 'Running Scared'. On 5 November, 2006, Roy Orbison became one of the very first recipients of a star on Music City's Walk of Fame.

Orbison House is a 21-unit residence for the mentally impaired in Los Angeles. There is an Orbison Building in Nashville, Tennessee, where Los Angeles-based sculptor Michael Kalish put on a one-man show in 2006.

1This is an exclusive club: Freddie Mercury of Queen had the same range.2The accident occurred on the highway between Hendersonville and Gallatin, Tennessee. At that time the family lived on Hickory Lake in Hendersonville, so it happened quite close to home.