The South West Coast Path - Kingswear to Brixham Content from the guide to life, the universe and everything 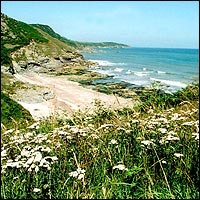 The South West Coast Path, is one of Britain's National Trails and, weighing in at a mighty 1,015km (or 630 miles), is its longest. It covers the whole coastline between Minehead in Somerset and Poole in Dorset, and can be tackled as a series of day walks or all in one go. The Entries in this series are suitable for either type of walker. All routes are described in the traditional anti-clockwise direction of travel.

The section described in this Entry begins at Kingswear, just across the river Dart from Dartmouth to the south, and ends in Brixham, the smallest town in the bustling resort of Torbay. The distance covered is 10 miles (16 kilometres), although the very steep section in the middle makes it feel much further!

To get to the start, you first need to find your way to Devon, in the UK - the M5, railway or Exeter Airport, which handles international flights, may prove very useful in this respect. If you haven't already plodded in along the coast path, you can get to Kingswear easily via Totnes or Torbay:

The Traveline portal is very useful for finding out details in advance.

Take plenty of fluids on this walk as there are no places to re-stock.

In Kingswear, find the train station or lower ferry crossing (very easy in this village) and walk through the arch beside the Post Office, turn left up Alma Steps and then right along the single track road. The road passes by plenty of small, expensive houses, but the town quickly peters out and after turning right downhill, you're finally away and on a wonderful woodland path. Dive steeply into the woods and back up the other side; this is a taste of what's to come. Views of the mouth of the Dart and Dartmouth Castle pop into sight occasionally, and an old tower overlooking a cove is passed. The signs saying 'DANGER! Keep Out!' put paid to any childlike exploration. Once away from civilisation and regulations, the walk becomes somewhat life-affirming; dappled sunlight sprays through the trees on a sunny day, and some of the old conifers here are truly fantastic.

The coastguard lookout and World War Two battery at Froward Point provide an excellent excuse for a break, though coast path virgins may wonder how the distance covered so far can be little more than a mile and a half! Now run by the National Coastwatch Institution, the area is well worth exploring, as much of the World War Two infrastructure is still intact. From here, purists will walk down the hill to the right, as it passes closer to the sea; those with less time or stamina, or both, can walk past the buildings and save a few hundred yards. Keep an eye on the twin rock of the Mew Stone here, where sea-birds drop guano and seals may be seen by the lucky hiker. Somewhere around this part of the route, walkers usually begin to feel they are doing something really special.

The path now variously takes in wild, open sections with good views and woodland strolls; steep slopes and level ambles; and, on a path that often feels remote, odd sections where plants have escaped from the gardens of the National Trust's Coleton Fishacre estate. On Pudcombe Cove's steep cliffs, peregrine falcons breed, buzzards hover overhead, and stonechats may sweet-chick away. Eventually, descend a bracken-covered hillside to reach Scabbacombe Sands. This is the most remote beach you will come to, and is popular with nude and semi-nude bathers; those with conservative sensibilities may wish to continue. In fact, over the next hill is Man Sands, a longer stretch of pebble and sand - and probably a preferable lunch stop, as there is only one really serious climb left to go after this. The beach here is a lovely stop, backed by a small lake, a row of whitewashed houses and with a good long stretch of sand where it is possible to find some quiet at any time of year.

The last big climb of the path is pretty hard going, but eventually levels out, and arriving at the top of Southdown Cliff few would argue that the views are not worth it. The rest of the route is laid out before you; first Sharpham Point, then Durl Head, and finally Berry Head and the start of Torbay. The route undulates from here, always attractive but never spectacular, and at St Marys Bay the Brixham Holiday Parks begin.

Just as it feels like the walk has gone from the wonderful to a long, slow drag, the walker finally comes onto Berry Head, a National Nature Reserve. This is a very important place; for migratory birds, which see the headland from far out to sea and make a bee-line for it; for its history, with its Napoleonic forts; for navigators, who are guided by its lighthouse; for bats (a nationally important colony of greater horseshoes call it home); for rock climbers, who see this as one of Devon's best venues; and for coast path walkers, who make straight for the cafe on the promontory and gorge themselves on cream teas and lemonade.

Linger for a while, have a poke around, look for dolphins and whales, which are often sighted from this high place and then think about getting to Brixham. The path descends through woods and then suddenly comes out near Shoalstone Pool, an open air swimming pool fed by seawater. A gentle, undulating stroll takes you into Brixham via the breakwater - keep your eyes out for the seals that lurk in this area, attracted by fishing boats - and near the marina, the first pub, the Prince William. Though tempting, there are probably better drinking options further round the harbour, where you will probably be seduced by the odour of fresh fish and chips at the end of the day's walk.

Brixham is as a good a place as any to stay over, and is well populated with B&Bs. At busy times, it may be worth telephoning ahead, or making straight for the Tourist Information Centre on the Quay.

As you would expect from a fishing port, fish are high-up on the local menus. Anywhere around the Quay, good fish and chip takeaway or sit-down meals can be found. The end of the day is pretty special around these parts.