Stonechats Content from the guide to life, the universe and everything 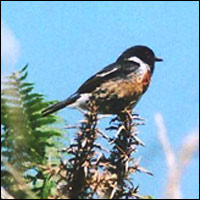 ...lonely on fell as chat,
By pot-holed becks
A bird stone-haunting, an unquiet bird.
- WH Auden, The Wanderer.

The stonechat, Saxicola torquatus, is a tough little insectivore - one of the few insect-eating birds that is resident in the UK year-round. Like others, such as the wren, stonechats are very susceptible to cold winters, and its main strongholds in Britain are the south and west of the country.

On the surface of things, it would seem there is little to get excited about. Being one of the thrush family (Turdidae), it is a fairly average-sized bird (about as big as a robin), is fairly attractive without being spectacular and, to the casual listener at least, its song sounds much like that of many other warbling birds. With its black head, showy white half-collar, dark brown back and rusty underside, there is no mistaking the male; the female is similar but a little more subdued in colour.

However, there is something oddly captivating about the stonechat. A birdwatcher's first experience of it will probably be the bird's alarm call; a sweet-chick, the latter part sounding like two stones being knocked together, hence the bird's name. Curious to find the source of this unusual sound, the twitcher1 will scan around and see, probably on a fence-post or drystone wall, a distinctive bird with its wings and tail constantly flicking. The bird looks genuinely alarmed, wondering who is on its territory; it bobs up and down, repeating its alarm call, and presently its partner will join in a few metres or so away. It has an oddly human quality; the bird is almost cute and childlike in its nervous concern. The birds continue their vigil until the captivated human intruder finally realises the time and meanders away.

Stonechat numbers in Britain have reduced over the last hundred years, largely because of habitat loss. Their strongholds are wild coastal areas, but other key habitats have declined in that time, especially heath - the UK has lost 90% of its heathland in the last 200 years. They prefer the milder winters found towards the south and west of the UK, but interestingly are more likely to be found in other parts of the country in the coldest months - possibly to ease pressure on local food sources. The British Trust for Ornithology estimates there are 34,000 breeding pairs in the UK, and anything up to 4.9 million in Europe, mainly in France, Spain and Italy. It is also found in small numbers in North Africa.

Stonechats feed mainly on invertebrates, although they supplement their diet with fruits and berries. They tend to sit on perches and only fly to the ground after spotting food. This makes them very visible and distinctive birds, especially on a habitat like heath, where most birds are hidden away in the heather and gorse and a well-perched stonechat is a welcome sight! Stonechats are also very useful in keeping down numbers of maggots and insects that can infest sheep, and in Scotland the bird has been long-credited with mysterious magical powers.

Colder than normal winters result in fewer insects, in turn affecting stonechat populations, but the biggest factor is habitat loss. Fragments of heath like Bovey Heathfield in Devon have been of paramount importance in arresting the population decline in the UK.

The species remains on the UK's Amber List of species of conservation concern (explained very well on the BBC Devon pages), but this is largely based on the official European status. On the European mainland, populations have made a sustained recovery to 'secure' status, and it is likely that Britain will follow suit soon and put the little bird officially out of danger.

Not to be Confused With

The whinchat, which is a similar size, has a similar call and similar colours. However, whinchats have a black 'eyepatch' and white stripe above the eye, and with practise their calls can be distinguished fairly easily.

The wheatear - WH Auden's bird was probably not a stonechat as many surmise as it is not a bird of 'pot-holed becks'; his bird is probably a mixture of attributes of the two.

For more information, including photographs, illustrations and distribution maps, you could do worse than look at the relevant BTO (British Trust for Ornithology) and RSPB (Royal Society for the Protection of Birds) pages.

1A term for a bird enthusiast.