Ging Gang Goolie - a Scouting Song Content from the guide to life, the universe and everything 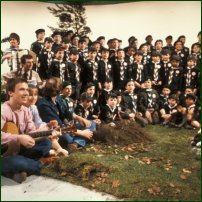 Surely nothing can better capture the essence of the scouting movement than the rousing echoes of 'Ging Gang Goolie' sung around the campfire. As identifiable as the badges, the tent and the woggle, the song was written by founder Lord Robert Baden-Powell himself as a rousing anthem for the youth of all nations. The supposedly nonsense lyrics have long been a source of intrigue and amusement, but the loss of innocence coupled with some over-protective attitudes may yet consign this classic to the bonfire for good.

Typically sung around the campfire as a two-part round, the first verse is sung throughout by all. At the end, the first group will keep repeating 'Oompah' while the second group starts again. When the second group reaches 'Hayla' the first group will join in again from this point. At the end of the verse, the groups split once again, but switching parts. The third verse ends abruptly for all at the 'Oom' of the first 'Oompah'.

The song has been recorded by a number of artists, including the Tremeloes, the Megatons, Karl Denver and the Rutles.

Equally popular with both scouts and guides, many variant forms have sprung up over the years, for example: 'Ging gang goolie goolie goolie on a pushbike...'.

Baden Powell, affectionately known as 'B-P', wrote extensively about his experiences in the Boer War, where he was engaged in both spying and reconnaissance (scouting) activities. Indeed the whole scouting movement was constructed on largely paramilitary lines. Working with local scouts, B-P had experience of African languages and songs, and it is assumed that the 'nonsense' lyrics to 'Ging Gang Goolie' were largely inspired by this. Certainly, some of the other scout and guide songs have their origins there.

B-P was keen to create a song which would unite his new worldwide youth movement without the barriers of language, yet provide some good, clean fun around the campfire, and the meaningless lyrics were ideal.

The Legend of the Great Grey Ghost Elephant

A popular campfire story was later invented as some kind of explanation for the song. It involves the legend of the Great Grey Ghost Elephant in deepest, darkest Africa.

To cut a long story short, the inhabitants of the imaginary village Wat-Cha were keen to avoid the visit of the ghost elephant, as they believed it brought hunger and drought. The village leader Ging-Ganga and the medicine man Ha-la-shay gathered with their supporters on either side of the village to deter the elephant with shields and spears on one hand, and magic spells on the other.

The story explains some of the words of the song: 'shalawally' is the sound of medicine bags being shaken, and 'oompah' is the elephant's reply. It is hopefully not too much of a spoiler to say that they were eventually successful in their actions.

But for all of B-P's military experience, he couldn't have foreseen the attack on his anthem, one which came from an enemy within.

Even though the lyrics may be nonsense, yet some terms would always sound similar to other words. The lyrics would inspire variant forms in other languages, and also in the minds of sniggering schoolboys. In particular, the third word, goolie, was the main culprit. Apparently deriving from the Hindi 'goli', meaning 'ball', this term is UK slang for a testicle. What, some asked, was a 'goolie watcher'?

At the same time, regular scandals were hitting the headlines regarding child abuse by scoutmasters. Even the title of B-P's 1908 masterwork on the subject, Scouting for Boys, was taking on a sinister new meaning.

The upshot of all this is that B-P's song for worldwide youth unity is now frowned upon by some scout leaders, and may never achieve the immortality it so clearly deserves.

For the avoidance of doubt, it is worth listing a few similar-sounding terms which categorically have no connection whatsoever with the lyrics of this masterpiece :

1FORD: ...O you panderly rascals! there's a knot, a ging, a pack, a conspiracy against me... (Merry Wives of Windsor IV ii)