The Art of Eating Toast Content from the guide to life, the universe and everything 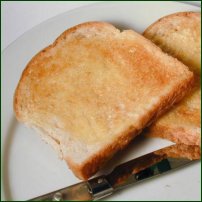 From peasant to prince, toast has been enjoyed by all classes and races for thousands of years. While its continued popularity is doubtless due to its simplicity and versatility, over the years eating toast has been perfected and refined into something of an art.

Part of the beauty of toast is that it can be eaten almost anywhere and at any time. It is, however, particularly convenient for early mornings or late nights, when cranial functions are at a low ebb and a quick fix is necessary.

Bread is 50% of the toast-eating experience, so its composition is vital. The type of bread used, the thickness of the slice and its heat exposure level are all independent factors which need to be taken into account.

In terms of toast, not all breads are baked equal. Toast bread should be sliced from a loaf and preferably have a crust. Unsliced loaves produce thicker slabs of toast with warm, soft insides, but thin, presliced bread is easier to eat. Other variables that will affect the eating experience are the thickness of the crust, the seeding on the loaf and the shape of the bread. Square loaves, for example, can be cut into both rectangular and triangular halves, while round loaves can only be cut into half-circles. Braided loaves frequently produce mismatched or otherwise uneven slices.

The greatest influence on the final toast product is the cooking experience. The intensity of the heat and the length of the bread's exposure to it, give the toast different textures and consistencies:

The Warm Wave: The bread is whisked in and out of the toaster, giving it just enough time to warm up, but not enough to acquire much crispness.

Golden Yellow: The slice is heated to a warm, yellow tone. The crispness is skin deep, leaving the centre warm and soft. It is stiff enough to hold its shape, but won't retain a crunch under a heavy, moist topping.

Rich Tan: The bread is heated long enough to turn a deep brown. The crispness is thick, often penetrating straight through the slice, making it crunchy and breakable.

Charred Hell: The toast is left to roast itself to a burnt, blackened stiffness. While some perfectly normal people do enjoy their toast this way, this stage is most often reached inadvertently by someone who intended to toast the Rich Tan variety, but was distracted at a critical moment.

A Brief Note About Heat

One result of toasting is that the bread comes out of the experience hot. Some consider this advantageous and immediately slap on a topping so it will warm up, melt or perform other tricks of thermal chemistry. Others prefer their toast cool, and allow it to sit around as long as is necessary to reach this condition. Since toast left to cool flat on a plate will become soggy on its underside, cold-toast aficionados should equip themselves with a toast rack so their toast can air-cool evenly on all sides.

With the bread selected and heated to the preferred degree, it is now time to decide how to top the toast. The sheer plethora of condiments that taste good on toast precludes any attempt at cataloguing them. Potential toppings can vary from simple spreads to commercially prepackaged meals, but they all fall into at least one of the following categories:

Meltable: Drippy, melted toppings complement the crispness of toast. Butter, chocolate and some cheeses melt easily. Meltable toppings go well with almost any cooking level, but they can get messy, as they are prone to dribbling down fingers.

Combinable: The gourmand in everyone appreciates the sensation of two distinct yet harmonising flavours mixing on the palate. Peanut butter and jam, hummous and matbucha and cream cheese and lox are some tried and true combinations.

Simplicity: Often, toast is called for because of the simplicity of its preparation. In such a case you'd want a topping that comes prepared and packaged, ready to be applied with a knife. Unless you are a DIY freak, chances are good that you have many such condiments stacked in your pantry or refrigerator. Butter, for example, is a basic staple commonly found in households, and which is also an excellent toast topper.

With the toast now prepared, it is time to concentrate on the method of consuming it. There are many ways of eating toast, and each has its own time, place and science to it.

Crust Last: You chomp out the entire centre of the toast, leaving over the crust. The crust can then be thoughtfully munched through end-to-end or dipped into the condiment of your choice. This method takes little attention and is suitable for people preoccupied with other things. It works best with a slice from a crusty loaf; seeds add excellent flavour. It can be used with any topping and any level of toasting.

Crust First: The exact opposite of the Crust Last method, this method entails biting the crust off the toast first before tackling the centre. If you are savouring the toast-eating experience and enjoy anticipating the pleasure of eating the centre, this is the method to use. It works best with thicker or stiffer slices of toast. Sticky or drippy toppings should be avoided unless you enjoy licking your fingers.

Top Skimming: This method is complicated and requires skill and coordination. You peel the top layer of the crust, along with the topping, off the slice for initial consumption. The crust and bottom of the toast follow. This allows a more concentrated enjoyment of the topping. It works best with thick Golden Yellow slices that still have soft centres. Hot, melted toppings taste especially delicious this way.

Folding: Whatever the size of the slice, you fold it in half to create a toast sandwich. This creates a soft, squidgy inside and, if using Golden Yellow toast, a crispy outside. This method does not work well with thick slices or crusty bread. Rich Tan and above varieties of toast should not be folded if they contain thick toppings, which will spurt out the edges and end up everywhere but inside the sandwich.

Pick and Mix: For this method, you randomly break the slice into smaller pieces. These can be made out of crust, centre, or both. This creates a selection of toast pieces with individual sensations and flavours that can be enjoyed in any order, and with additional amounts of topping as preferred. Any type of bread can be used, though stiffer levels of toasting work better. Due to their nature, sticky toppings are best avoided.

Though toast is one of the simplest of foods, the art of eating it is complex and highly personal. Some people replace ordinary sandwich bread with toast; this is particularly apt when the only bread available is stale. Others put the topping on before applying heat, creating a squidgier top and crunchier bottom and crust. Still others do not eat their toast at all, preferring the stiffened bread in the role of door-stopper. As our civilisation continues to advance, so will the art of eating toast. As fashions change, as science evolves, as capitalism roars onward, toast will quietly adapt and endure. The art of eating toast began thousands of years ago before our civilization was established; it will doubtless continue to develop when our society is long gone. Little can be depended upon to remain up-to-date in our ever-changing world, but toast is eternal.

Toast will live on.