Memory Stories: A Revision Aid Content from the guide to life, the universe and everything 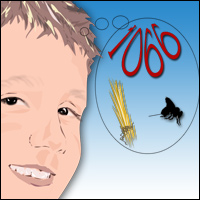 Revision - the bane of almost everyone who has to take an exam. While many of us have the best intentions, eventually we will find ourselves with 24 hours or less to learn some vitally important information. What do you do? Run about in a panic? Write out notes again and again and again? Try to break a bone or catch an illness so you can avoid the exam? Don’t lose hope. There is an alternative method which can be a quick and easy way to learn facts.

A word of caution before we start: while this method has been known to work, it is not suitable for everyone, nor should you leave your revision until a few days before an exam hoping this method will work for you. Use it either in addition to normal (ie, planned) revision or as a last resort if you run out of time!

This method works by constructing a story in your mind that connects all the facts you need to learn. At a very simple level you can use it to learn a string of numbers quickly, such as a phone number or a numerical password. With slightly more effort and practice you can use it to learn whole lists of facts, for instance dates of important historical events or what certain philosophers thought about an idea.

So, how does it work?

Say you have to remember a phone number quickly. For instance, your new boyfriend or girlfriend has given you their phone number and they want you to know it by heart by the next day. While they are rattling off the number to you, and you are scribbling it down furiously, you can make up a short memory story so that you can recall the number easily. Let us take 74481911. So how can you learn it as a story?

It’s as simple as that. It can seem like a waste to use the memory story for just learning numbers, but once you've become practised at using it with numbers, make a list of facts and try to learn them using the method . See whether it works for you. If it doesn't work for you, your memory might not work pictorially

So what can you do to make this memory story even better?

Remember, these stories can be used as either a very quick way to learn something in the short term (a few days), or to remember large amounts of information for long periods of time (the story will last as long as you keep reciting it). Many people use methods like this to remember things such as the order of playing cards in a deck3. Whatever else you do give this a few goes, and if it doesn't work then don't use it; it isn't for everyone. But if it does work for you then it should be a major boost for revision, fact learning, and however else you choose to apply it!

1This may or may not be a real phone number!2This is not a necessity. It is just as easy to create a location for the story, which can have its own benefits! Try stories with made up and real locations and see which works best for you!3The current world record holder for remembering the order of decks of cards uses a very similar method, setting his story around London.