Various Historical Methods, or, How to 'Do' History Content from the guide to life, the universe and everything 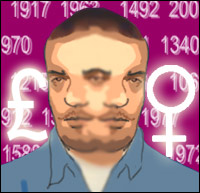 There are, quite probably, as many ways to 'do' history as there are different types of people. Over the years, professional historians have tried to make sure their work is relevant to other historians as well as to the public. Scientific 'objective' methods, mostly based on the German model proposed by von Ranke, were in vogue for a long while. This method involved doing massive amounts of archival work, but centered mostly on political, institutional history.

After World War II, the homogenity of the historical profession began to break down. Women and non-whites entered into the academic study of history in large numbers, and this altered the perspective of the subject. Suddenly, objectivity seemed more like a middle class, white male point of view, instead of something that was actually 'truthful.' In fact, people began to question whether it was possible to get to historical 'truth' at all. Thus, a new brand of 'doing' history had to be forged. Out of the ashes of objectivity arose many different ways of looking at history, writing about history, and teaching history. Having said that, it should be pointed out that only a few of these methods are currently acceptable in the hallowed halls of academia1.

There are others, of course, based on race, religion, or other, more esoteric factors, and not every historian falls into just one of the categories, but these six are certainly in evidence in academic circles today.

From this viewpoint, everything boils down to class struggle, represented by the base/superstructure model. Marx says all of history is nothing more than the struggle for survival first, and once subsistence happens, it's all a matter of fighting over who gets the surplus. Yes, there's lots of talk about the proletariat, and the transcendence of true communism, but really, in the end, it's all three things:

There is, however, a caveat: according to Marx's own definition, neither the USSR nor China have ever been close to real communism, which has no national identity. One of the most famous Marxist historians is EP Thompson, and a number of scholars in 20th century Latin American history tend to use Marxist analysis.

It's currently hip to compare unusual things, like the lives of black male slaves in 18th century colonial West Indies and modern Filipino women working in sweat shops. If it crosses racial lines, gender lines, and/or time, so much the better. This trend toward global comparative history opens up a lot of avenues, but the question most people ask is about how relevant it is.

The subsection of this is do a linear comparison of the same area. Say, Mongolian China in the Middle Ages and during the Cultural Revolution. It's interesting, but really hard to teach. World History classes are popping up all over, but think about it - how much can you really know about all the history all over the world? Which is why comparative historians tend to be theoretical, although there are some who actually make it all make sense. Ken Pomerantz, who works with Chinese history, is a great comparative historian.

Although this mode of inquiry is slowly losing ground because of it's essentialism (the assertion that all women at all times have been oppressed in the same ways), it's still hanging in there. It has reinvented itself recently in a more ecumenical fashion, calling itself gendered, so as not to put those without female organs off.

However, there seems to be a major flaw: the assumption that the male (or masculine) is always driving to conquer, and that the female (or feminine) is always the conquered. The teleological conclusion of which is that if women ran the world, none of this would have ever happened. Which is essentialism at its best. There's also an assumption that any female historian is automatically a feminist historian (although the assumption is false), mostly because women tend to notice when women aren't included. Excellent examples of feminist historians include Ulrike Stasser and Laurel Thatcher Ulrich.

This method has fallen seriously out of favour in the academic world, but, in school, this is the way most of us learned history. Teleological simply means 'words/talking from the end', and that's just what this method does. Examples of this would include American historians who might downplay the important part French aid played in the outcome of the American Revolution, or British historians who might claim that the British Empire was so big not because of firepower, but because of the sheer superiority of the British people. Most teleological historians tend to be dead, frankly, and Henry Charles Lea and Edward Gibbon can safely be placed in this category. Part of the problem with teleological history is that there's a certain smugness in the author's writing, and 'history is written by the winners' seems to be the underlying thought. It isn't pretty.

This school of history is probably the most famous, after the Marxist view. In the late thirties two French historians, Marcel Lefevre and Marc Bloch, tried to get away from the von Rankean notion of truth as somehow only belonging to this very narrow slice of historical figures and events (usually kings and battles). They began to look at the society as a whole, thus ushering in social history, which is what most colleges teach today. Annales school historians are interested in what they call 'the long durée' - studying not specific moments in history, such as isolated battles, but the change over time in any given society. They look at such things as population, religious beliefs, and cultural norms. This can be taken to absurd lengths - such as a famous history of the Mediterranean that starts with descriptions of the primordial sludge. However, most social historians working in this framework tend to focus on an area and write extensively about that. Other than Bloch himself, other famous Annales school historians include Emmanuel Le Roy Ladurie and Braudel.

Now, this method is great if you are studying, say, the history of native peoples. It includes not only history, but anthropology, ethnography, and archaeology within its tent. In some ways, Ethnohistory is the natural extension of Lefevre and Bloch's Annales school of history. Admittedly, ethnohistory requires that the history you are writing about can be explored through the physical sciences.

Sometimes, parts of ethnohistory can be combined with more tradtional methods of historical approach to round out a particular group or location. James Axtell is an excellent example of the ethnohistorian.

This is something of a derogatory term, and is often associated with those who try to actually deny historical events (for example, some white supremacy groups who deny that the Holocaust ever happened.). However revisionism also encompasses much of the historical work being done today in a broad manner. Revisionist historians, if they are working in one of the above categories, tend to fall into the feminist, comparative, Annales or ethnohistory groups. Marxism is too ideological for them, and teleological history just infuriates them. For them, the maxim 'those who do not know the past are condemned to repeat it' is absolutely true.

Environmental historians, such as Dan Flores, tend to work exclusively in this arena, as do some feminist scholars. The counter-response to revisionists is usually something along the lines of 'you can't resurrect dead people'. Revisionists tend to teach from the viewpoint of the oppressed or the colonised - underdog history, if you will.

If teleological history celebrates the 'winners,' then revisionists remind us of the 'losers' (a simplified version of the issue, to be sure, but accurate). Revisionist historians also tend to challenge readers' assumptions; that the word 'race' always means 'non-white' (and even more specifically, 'black'), or that 'gender' always means 'women.' In 2003, George W Bush excoriated revisionist historians as incompetent and detrimental to the education process. They beg to differ.

1This researcher is from the USA, and this may not reflect other countries' academic trends.