You know you want to try this.

How to Make a High-Tech Pompom 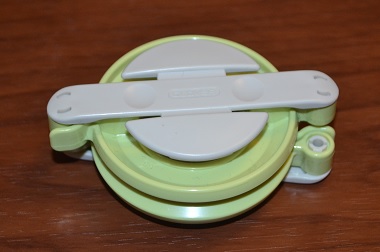 The Edited Guide is the planet's most massively useful compendium of information about life, the universe, and everything. And it's becoming even more useful by the day, especially where How-To and DIY is involved. (Bluebottle, I am eagerly anticipating the Entry on 'Sweater patterns of the Isle of Wight.' Get to work.) Did you know, for example, that you can learn to make a pompom from the Edited Guide? Thanks to MiniMy and Echomikeromeo, you can. But what if you're not really talented? What if you're a craft idiot like, say, the Post Editor?

Then you might want to go high-tech. Behold the pompom maker, a plastic marvel. I expected it to come with a fancier name, such as Super E-Z Yarn Ball Facilitator, but no. It's just called a 'pompom maker'. Knitters are so practical. And if, like me, you found that your cardboard-based efforts in the pompom line were less than stellar, behold, the 21st Century is not only the Age of the Fruit Bat, it's also the age of the Plastic Gizmo.

This handy device is available online, or in your local sewing notions shop. Alternatively, you can be ninja-gifted by your relative, who is determined that you shall become craftier in your old age. Loom knitting is a good thing, and keeps you away from the dangerous power tools. Knitting accidents, though aesthetically painful, seldom end up in A&E. 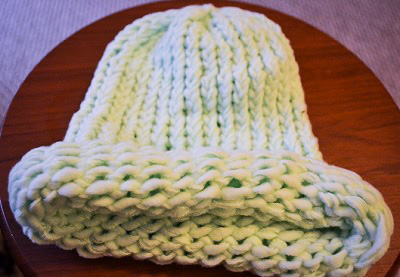 Today, friends, I will teach you how to make a pompom using this incredible high-tech device. It will take only a few minutes, and it's so simple, even I got it right the first time. The motto should be, 'It's so simple, even a trained Gheorgheni can do it!' Ahem.

First, contemplate the hat on the left. It is not a bad hat. In fact, it's quite a nice hat, which I spent about two hours knitting on my round loom. The materials – factory seconds, but sturdy – made up nicely at a total cost of about a dollar. I felt that my pride in my handiwork was justified, and I hope to make some child happy with it. But wait! It's sort of plain, isn't it? As a hat, it does the job. It will keep the head warm, and it's an attractive colour. (In real life, it's a light green. I don't know what happened to the camera there.) But does it excite? Does it wow the schoolyard? Does it make a fashion statement? I think not. It lacks a certain je ne sais quoi.

This hat is sad, because it has no pompom.

Thanks to the pompom maker, aka Magic Plastic Yarn Torturer, this problem is easily remedied. 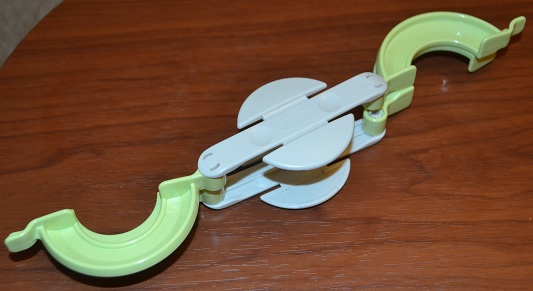 The pompom machine will look complicated to you unless you're a rocket scientist like Baron Grim, or an experienced knitter. (Nothing fazes experienced knitters, not even those weird plastic safety pins.) Fear not: you see those round things around the outside? Extend them until they look like the picture.

Now you have two sets of two semicircular things. Together, they will make a Round Thing. We can deal with Round Things. Trust me on this.

Take some yarn, whatever you want to make your pompom with. Stiff, thick yarn is best. You may use the same colour as your hat, or – as I did – choose a complementary or contrasting colour. (I did this because the yarn I was using made a lousy pompom. I tried this first, and believe me, I'm sparing you the picture.)

Now you're ready to start.

Wrap it around the first pair of semicircular Things. (If it helps, the German instructions call them a 'Bogenpaar'. Doesn't help? I didn't think so, but it was worth a try.) You wind the yarn around in the same direction, silly, from one side to the other. THEN, to make a really good pompom, wind it again the other way, making a second layer. If you have OCD, this part will be very satisfying, and your yarn will be nice and parallel. The rest of you slobs, keep trying.

When you're done, the yarn on the pompom machine should look like the picture. If it doesn't, try again.

Do NOT call Prof Animal Chaos for advice. We don't know if he can do this, but the instructions don't get any clearer in Yorkshire.

Once that side is wrapped, fold the Bogenpaar (pair of semicircular Things) back into the centre bit. Cut off the yarn.

Now Do It Again 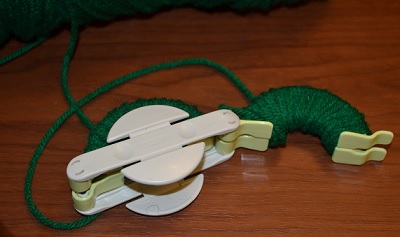 That's right, do the other side the same way. Two layers, wound neatly, Bogenpaare tucked back in, yarn snipped off the skein.

Your Spectacular Galactic Dust-Fuzzy Manufacturing Device should look like the picture here.

Are you feeling excited? Stop and take a restorative draught of the beverage of your choice. You'll need your strength for the next, nerve-wracking step. Which also involves scissors.

…do not run with them. 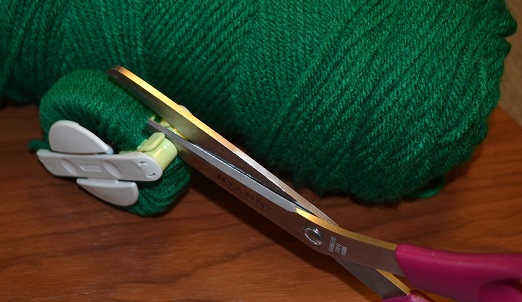 Now that you have the scissors, you're ready for this vital step.

First, grasp the assembly of the Sirius Cybernetics(TM) PomPomMaster 6000 in your non-dominant hand. In your dominant hand (these instructions are designed for species with two prehensile appendages, for more, adjust accordingly), take up the scissors, carefully. Be sure the sharp end is away from you and pointed at the pompom maker.

You see where those two semicircles have a space in between? Stick your scissors in there. Cut the yarn. Go around the pompom maker, cutting yarn as you go. Sing a suitable song, if you like.

When you get all the way around, stop. You can have too much of a good thing. 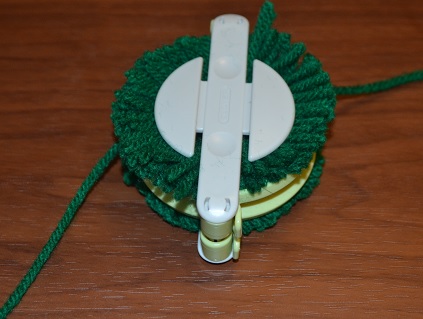 Cut yourself a length of yarn. How long, you ask? (Always these inconvenient questions.) Long enough to wrap around your pompom, tie (twice), and have enough left over to tie the pompom through your hat. You do the maths.

People with large hands, take note: you will be tying knots. This may be an unfamiliar procedure to some of you. It may also be tricky. Keep in mind, the thinner the yarn, and the thicker your fingers, the harder tying knots will be. Plan accordingly. You can always cut off the excess. No one will think less of you if you waste a whole three inches of yarn.

Now, have you made the difficult decision and cut the yarn? Good for you. Now, here's the hard part.

Slip the yarn around the pompom, between the semicircular Bogen-thingies. Wrap the yarn in a knot around the pompom, and pull tight. Let me rephrase that: people with less strength in their fingers: pull as hard as you can. Those who (like me) have actually broken keys in locks, pull firmly without breaking anything, okay?

When you've made the knot, loop the yarn around to the other side, and tie another knot. 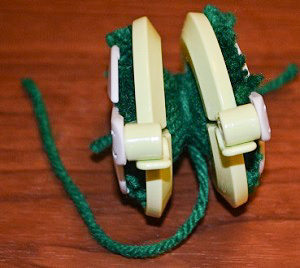 Grasp the two sides of the Magic Pompom Disk. Pull apart. (Surprise! There's a pin in there, and the two sides separate. Now admit it, you're astonished at this. Loom knitting is full of little aha-moments like this.)

Once you've pulled the pieces of the machine apart, set them aside. You can reassemble the magic machine to make another amazing pompom. But first, you have to finish this one.

Delayed gratification is the order of the day here.

Examine your pompom for flaws. (Pretend you're a yarn inspector on the Isle of Wight.) Are bits sticking up? Prune them.

Do not cut the tails off the yarn you used to bind the pompom, though. Save that, because there's one more step. 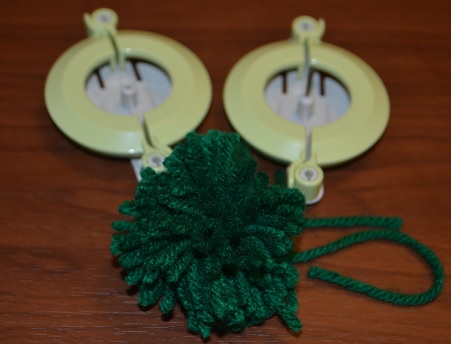 Stop and admire your pompom. Is this not a work of art?

Who would have thought it? Only a few short minutes ago, you didn't know how to make this.

And now you do.

I hope you're impressed with yourself.

At this point, your imagination is entertaining notions of the vast horizons of cleverness and creativity you will display in the future. The yarn-filled sky's the limit here.

Now, go and attach your pompom to the hat. Just winkle the loose tie ends (the ones you carefully avoided snipping off too short in the preceding steps) in through the mesh of your hat, and tie them together in a secure knot. Now you can snip the ends shorter, if you like.

A special tip for the totally challenged: please remember that the pompom goes on the top of the hat, and outside. The knot goes on the inside, please. 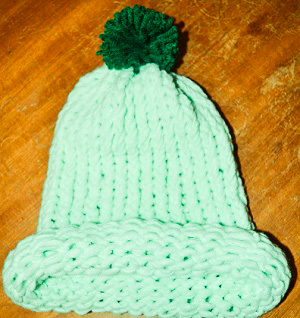 You see this hat?

It is a happy hat.

Why is it happy, you ask?

Because it has a jaunty pompom on it.

Feel pleased with yourself. Feel proud. And hope the kid you send this to at Christmas really likes green.