What to do on a rainy day. Or not.

In which the Editor attempts to reclaim ancestral skills 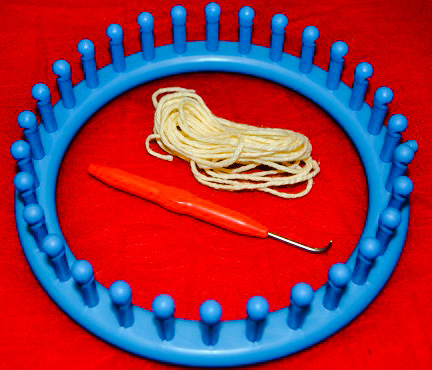 I come from a long line of handy people. They had mad skills: they settled a wilderness, hunted, planted, gathered, explored. They made things. They built cabins and houses and cobbled together furniture. They made their own clothes, for heaven's sake. They created visions in quilts…

I have seen my father take a straight-edge, a pencil, and a quarter and draw out, on a piece of shirt cardboard, a floorplan for a house. When he was finished, he signed it and added his engineering licence number. The farmer who'd requested it took this plan to the Federal Housing Authority and got a loan to build his house. I thought this was awesome.

What do I produce with a straight line and a circle? You've seen them. They're called cartoons (by default). And I need a computer for that. I am a disgrace to my skilled ancestors.

The women in my family have always been able to 'run up' a shirt in a couple of hours, possibly made out of a flour sack. They can knit and crochet, as well. They produce beauty and bounty. My mother never let a baby of her acquaintance come into the world without a darling jacket, bonnet, and set of booties in a suitable colour (blue for boys, pink for girls, yellow or green for 'we don't know yet'). Skills are a gift – both for the one with the gift, and for the recipient of the product.

My sister knows how much I envy all this skillfulness. She also knows that, deprived of a keyboard of some sort, I am basically all thumbs. So she brought me this loom set. 'With a round loom,' she announced, 'you can make lots of things. I'll show you how to get started.'

The round loom is a handy tool. They come in different sizes. You loop the yarn around and around, and then use the hook (pictured above) to pass the loops over each other. Eventually, if you do it right, you get something: a round hat, or even a square something, like a washcloth.

That's if you do it right. 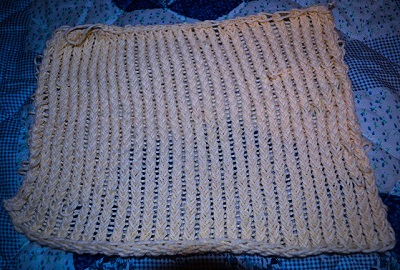 The church folk are collecting handmade washcloths to send overseas as part of Operation Christmas Child. This is the most worthwhile project you can imagine. Every Christmas, people in the First World pack shoeboxes with gifts for kids in the Third World. Each package includes fun stuff, like toys and games, school stuff, like pencils, sharpeners, pads, coloured pens, and necessary stuff, like toothpaste, soap, and washcloths. They also throw in hats, gloves, shoes…you get the idea. What a child surviving under difficult conditions might really need, plus some enjoyment. It's a way to share. (If you're a European, ask an elderly person what they thought about CARE packages in 1945.)

It takes all year, this project. So far, we've raided the going-out-of-business sales for toothbrushes and such, packed sewing kits that fit into recycled medicine bottles (space is at a premium), and made jewellery out of washers. We buy lots of Ivory soap, because it floats, in case they're bathing in a stream or lake. The end goal: 300 boxes from this group, to join all the thousands of other boxes in the big shipping container.

Some of the washcloths are made of terrycloth, but others are knitted, crocheted, or, just possibly, loomed. That's if I can figure out how to make them.

I tried to follow the directions, but they weren't written for idiots, a serious oversight. I couldn't figure out how to make the edges come out right. The first attempt was rather lame. (See above.) I gave it to my brother-in-law with the suggestion that it would make a nice oil rag for his garage. My brother-in-law was appropriately complimentary about my burgeoning skill set. (He's just grateful I didn't volunteer to help him fix an engine.)

Here is my second attempt. I quit while I was behind. Then I called the Expert. The Expert said, 'Look at some Youtube videos.' I did. I endured endless cute videos of Cheerful Fairies nattering on about how much fun we were having. The lady who started her videos by beaming beatifically through the centre of a knitting loom sorely tested my resolve, but I persisted.

Several hours later, this is what I had learned: every knitter did it differently. (Groan.) And I still couldn't figure out how to keep the edges straight. After five tries (I spare you further illustration), I decided Lessons were in order. I have an appointment out at the farm, where I hope to plumb this mystery and acquire the necessary know-how.

The fact that my 14-year-old grandnieces use this loom to great effect does not make me feel any better. 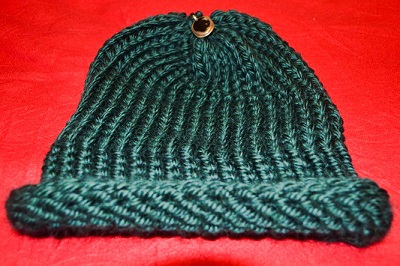 However, all was not lost. Although I still couldn't finish edges, I had grokked the basics of loom knitting, as long as I was making a Round Thing. Round is easier than flat, who knew? (Columbus, maybe.) So I made a hat.

This process was facilitated by the fact that the only directions included in the box were on how to make a hat. Obviously, this is where beginners belonged. So, following the 'for dummies' instructions to the letter, I knitted merrily away for a few hours, et voilà!, un chapeau vert. Okay, it's sort of vert-bleu, but anyway, it's a nice colour. It's also warm. And big enough, because I used the whole skein. I take a large hat size. I added the bobble at the top, although it was not in the directions. This is because I simply cannot leave well enough alone. I'm a lily-gilder from way back. However, I was quite satisfied with the results.

Full confession: that hat does not look exactly like it's supposed to. Besides the bobble, I mean. It looks like it has two kinds of stitches in. Notice the change halfway up the hat? That was not planned. I suspect I 'slipped a stitch' in there, and the whole shebang shifted somehow. I don't mind confessing this to you, but when anybody asks, I'm going to smile knowingly and claim I did it on purpose. When they ask how, I'll tell them it's a trade secret passed down by my skilled ancestors.

While doing the tricky bit – drawing the knitted tube together to make the crown of the hat – I drew encouragement from that great Impressionist, Georges Seurat. Listening to Mandy Patinkin sing 'Finishing the Hat' from Sunday in the Park with George provided the needed inspiration, and is probably why I added the bobble. For artistic self-expression, you see. I also talked to the dog, just like Georges.

Where there never was a hat.

Just wait, kids. I will learn to do your washcloths, promise. And after that, who knows? A knitted reproduction of Un dimanche après-midi à l'Îe de la Grande Jatte, anyone?

Update: At my prodding, the Expert came up with a design for a washmitt (which is a Round Thing). Her prototype looks wonderful, and I'm looking forward to producing actual washcloths that can be used by real people. In the meantime, I've made another hat – kid-sized – out of an interesting fleece that's just advertised as 'factory ends' from Turkey. Anyhow, the hat came out good enough to share. And yes, you could have knocked me over with a feather. (The Expert will be surprised, too.) I feel absurdly accomplished.