What happens when h2g2ers camp in the Highlands?

It was a dark and stormy night, the rain lashed the highland rocks – except at occasional intervals, when it was blown nearly upwards again by a violent gust of wind which swept up the stray and protesting heather (for it is in Scotland that our tale unfolds), rattling over the bens, and fiercely agitating the feeble flame of a Coleman lamp that struggled against the darkness.

'Ye gods,' exclaimed Edward. 'However did I let myself get talking into this?' He looked disgustedly toward his companion, Mary Sue, who was busy arranging sleeping bags in a tent which (he hoped) was going to manage to stay up against the gale. 'Let's go camping in the Highlands', he mimicked. 'It'll be romantic! Pah!'

Mary Sue shrugged, which made her anorak give off a wrinkly sound, barely heard above the wind. 'Wait until morning. When the sun comes up over the mountains, it'll be worth it, you'll see. In the meantime, get under shelter. Once you've eaten, you'll feel better.'

Edward doubted this, but he wasn't getting any drier, so he accepted the invitation, cocooning in the flapping tent and preparing to enjoy – or, at least, appear to enjoy – an evening repast of an MRE, or Meal-Ready-to-Eat, purchased from US military surplus. Well, okay, from a black-market source of US military surplus, in a soukh that shall be unnamed, somewhere east of Anatolia. Edward and Mary Sue were experienced hitchhikers. Which meant they wrote for the h2g2 Post, but didn't mean they liked getting wet.

Mary Sue was right. The MRE, along with being relatively dry, did put Edward into a better mood. He managed to get the camp stove working, and produced something that was almost, but not quite, entirely like Earl Grey, and the two sat companionably shoulder to shoulder as they sipped and stared out into the rainy night. The wind had died down a bit, and the downpour had become a desultory drizzle, when Edward suggested, 'How about a story? Do you know one about these parts?'

Mary Sue thought. 'Well, I've heard a legend about this mountain, but you're so suggestible, I hesitate to mention it. You know how you get. . . ' Realising she'd gone too far, she bit her lip, but it was too late.

Edward snapped. 'How I get? I have no idea what you're talking about. If you're referring to the last h2g2 Meet in Manchester, that was Pastey's fault. One too many Pan-Galactic Gargle Blasters would make anyone nervous. If you can tell a story, I am perfectly capable of listening to it with equanimity, so there. How I get, indeed.'

Mary Sue decided to take the plunge. 'Well, all right, if you're sure you're up to it. . . ' she held up her hand to forestall further argument. 'But I haven't got any PGGBs with me. Or beer, for that matter. So you'll have to listen to this sober.' Her eyes twinkled with amusement. 'This story was told to me by a Scottish Researcher. It involves the Menace of Cragg MacCracken. That's where we're sitting now,' she added helpfully. Edward settled back on his sleeping bag, prepared to hear the tale.

Mary Sue warmed to her topic. 'Long ago, so long ago the origin is lost in the mists of time – maybe even before the internet – there was a croft who lived up on this desolate cragg.'

Mary Sue nodded. 'And so it was. Hamish MacCracken. Now, Hamish was madly in love with Flora Campbell, the red-haired lass who lived in that last village we passed on the way up here. But Flora wasn't studying Hamish, no sir. She had her eye on the pubkeeper's son, who had much better prospects.

'I know,' interrupted Edward. 'I read the Wir Ain Leed website, too.'

'– but Flora wasn't having any. Crofting too hard, not enough of the readies. Besides, she said, she was mortally afraid of sheep.'

'Ayup. She claimed that once every generation, a sheep would go rogue, and turn feral, and become a man-eater. And she didn't want to be around when this happened.'

Edward was suspicious. 'Was this Flora by any chance into train-spotting?'

Mary Sue shook her head. 'No, this was before trains, I think. But she might have been a coach-spotter, for all I know. But stop interrupting. Hamish, of course, was really put out by Flora's rejection of the crofter's life, and this insult directed at sheep. Hamish resolved upon revenge: he decided to raise the largest, most prize-winning sheep he could, and name it 'Flora Campbell'. That would show her.'

'What would it show her?' Edward wanted to know.

Mary Sue shrugged. 'I dunno. They think strange hereabouts. Maybe he was aiming for fame and fortune – or at least, a Guide Entry. But anyhow, Hamish spent years breeding sheep. His sheep got bigger, and fatter, and gave more wool. . . '

(Eyeroll.) 'Okay, more 'oo, than any other sheep in these parts. But they were all fairly placid. Then, finally, it happened. His prize ewe – NOT 'oo, ewe   – gave birth to the perfect Flora Campbell lamb. It grew faster than the other lambs. It was HUGE. And its wool – okay, 'oo – was red. Hamish was planning to take it to the agricultural fair.'

Edward nodded. 'Sounds like a winner. What went wrong?'

Mary Sue's voice grew hushed. 'One dark and stormy night, just like this one. The wind was howling outside the croft. Hamish heard a sound from the direction of the sheepfold. . . a sound totally unlike what he was supposed to be hearing from a sheepfold. A sort of long, low bellowing, like a soul in pain. . . '

At this moment, the wind outside the tent suddenly and completely died. In the silence, the two campers could hear a distant moan.

Edward shivered. 'What was that?'

Mary Sue looked shifty. 'I didn't hear anything. Do you want to hear the rest of this? Then don't interrupt. A sort of long, low bellowing, like a soul in pain. . . Hamish, his heart in his throat, took up a lantern and headed out to the field. There he saw a sight that chilled his bones and froze his marrow. . . '

'His marrow. It's an expression. Anyway, it was way scary: there in the fold were nothing but dead sheep. And standing in the middle.. . '

There was another moan outside, less distant, this time. Edward looked around, but seeing that Mary Sue didn't react, decided to say nothing until the story was finished.

Mary Sue went on, intent on her tale. '. . . and standing in the middle of the dead sheep, was Flora Campbell. Flora Campbell the mutant sheep, I mean, not Flora Campbell the red-haired girl, who by now was married with six kids down in the village. Anyway, there it was – this humongous sheep – with red eyes and red 'oo and red fangs dripping with red, red sheep blood, and giving off this blood-curdling cry. . . '

The sound came again, the deep moaning. This time, it was right outside the tent. Edward had had enough. He leapt to his feet, and heedless of Mary Sue, ripped open the tent flap and tore down the mountainside, shouting, 'It's the killer sheep! Run for your life! I'll meet you at the pub!'

Mary Sue sat there for a moment, astonished. Then, taking a torch, she cautiously peeked outside. Standing in a semicircle near the tent was the rest of her audience – the source of the low moaning. Mary Sue smiled.

'Hi, there. Do you want another story?' The shaggy red cattle lowed approval.

Edward later threatened that if this tale ended up in the Post, he'd sue. 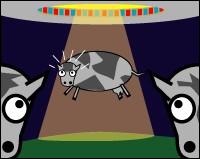