Bagging the Munros - Conquering Scotland's Mountains Content from the guide to life, the universe and everything 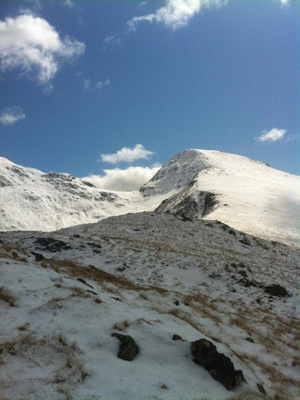 In 1890, Sir Hugh Munro compiled a table of the 283 Scottish mountains over 3,000 ft in height (914.4m), which are now affectionately known as 'Munros'. More than a hundred years later, in 1997, a 284th peak was added to the list, Beinn a' Chlaidheimh, being exactly 3,000 feet high. To climb all the Munros is a lifetime's achievement, a passion and a mission. The 4,000 or so people who have achieved it sometimes refer to themselves as 'Munroists'. Sadly, Sir Hugh Munro himself never became a Munroist – he died before conquering his last peak, the one close to his house, which he was leaving until last.

To climb all the Munros is to experience some of the most beautiful scenery Scotland and the world has to offer.

There is a certain type of personality that is attracted to the challenge of collecting all the summits. Many others would just settle for climbing the most convenient or most attractive. But a dedicated Munro bagger will get up early on a weekend morning, drive past some perfectly lovely mountains solely to reach one they haven't climbed before, so it can be ticked off the list. You have to reach the summit for it to count, so even if you get within a few metres of it and are forced back down the mountain (say, due to bad weather), it doesn't count. You'll need to go back and try again.

All the Munros are located in the Scottish Highlands, north of the cities of Edinburgh and Glasgow. The most southerly can be reached by a 2-hour drive from Edinburgh or Glasgow. With the exception of  a small number on the Isle of Skye, all Munros are on the mainland. Ben Lomond, which is on the east bank of the famous Loch Lomond, can be reached by public transport, and is one of the easier climbs. The most challenging is generally regarded as the inaccessible pinnacle of Sgùrr Dearg on the Isle of Skye - the actual summit of the mountain is a rock pinnacle with a 50-metre (150 ft) face, that can only be conquered using rock climbing skills.

Could I climb a Munro?

Well, it depends on the Munro. They range from a strenuous walk to a difficult climb requiring ropes and equipment. Some of them have a path clearly marked to the top, but they still deserve your respect. If you have walked on smaller mountains in England, you may be lulled into a false sense of security. The first thing to remember is not to put yourself in danger. If you do that, someone else will have to put themselves in danger to rescue you.

Unlike mountains in England and Wales, the Munros are usually covered in snow from roughly October until April, or even early May. The picture that illustrates this Entry was taken in mid-May; the weather conditions were snow-free at sea level, with two feet of snow at the summit of An Stuc.

The highlands are rocky and grassy mountains, with snow in the winter, and a delicate smattering of lochs. There are ridges with sheer drops down each side, and hidden lochans, small lochs high in the hills, not to mention deep lochs in the valleys. During the summer they are mostly free of snow, but in the winter they are usually covered. The weather can change from bright sun to soft rain and gales.

In times past, the mountains were covered in Scots pine up as far as the tree line, but these are long gone. Until about 50 years ago the crofters would bring their cattle up onto the lower slopes to graze in the summer. They built 'sheilings', little stone houses, to live in during those long days. You can still see the ruins of them around the mountains. Nowadays, the lower slopes are often used for sheep farming or growing pine trees for harvest. The higher slopes are the territory of the herds of red deer, the wild cats and the other wildlife.

A Day on the Mountains

It pays to be prepared. First you must ensure you are fit enough, and know what you are doing. Ideally you should find someone experienced to go out with you the first few times. Alternatively, you could join a walking club or take a course in hill skills. Whoever you decide to go with, tell someone what time you are likely to be back, what route you are taking, and making sure they know how to call for help should you not return as planned.

Check the mountain weather forecast for the area concerned. You may also have to check the deer stalking schedule as well. Make sure you have the appropriate map, and ideally a guidebook if you don't have a guide. You'll need appropriate equipment, broken-in boots, a map pouch, a rucksack, hiking poles, not to mention a map and compass. Never forget your common sense.

Make an early start to make as much of the daylight as you can, and find out where to park. You may have a long walk to the start of the Munro, then you'll hit the long hard slog that is the ascent. Many Munros start from sea level, so there can be a fair bit of ascent. After a while you will turn around and see how far you have come - and be greeted with a whole new view: one that no one else will have seen.

The real sense of satisfaction comes at the summit - from getting there and having achieved your goal. Be sure to take a photo to bore your friends with later. It's important to remember the safety and be prepared to turn back; the mountain won't go anywhere as long as you live to see another day. Nothing matches the feeling of getting to the summit, and knowing that's another peak off your list.