Prosophobia and the User Page Content from the guide to life, the universe and everything 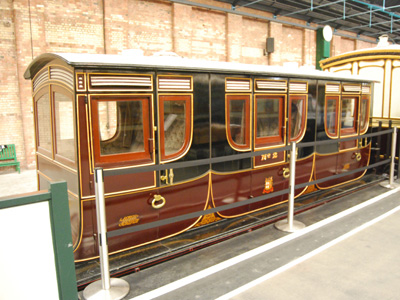 Study this picture. What is it? It's a railway car1. Why does it puzzle us? Because we know that a railway car is an elongated box on wheels that runs on a track, pulled by an engine. Why in the world would someone want to paint it so that it looked like a horse-drawn carriage?

Because, dear friends, the first people to ride on railways were used to riding in horse-drawn carriages. To them, this was the correct form for a decent mode of transportation.

Prosophobia, or fear of progress, takes many forms, from speed-limit laws for bicyclists to Luddite behaviour. It's a legitimate phenomenon, though: the question of progress is not a black-and-white issue of 'change good, oppositionists a bunch of old fogeys who belong on the trash heap of history'. Far from it. How we cope with change on a societal level tells us a lot about the need for change itself, and what changes those changes make in how we live.

In the 19th Century, even before there were cars, there were road problems. Central to the fear of innovation was opposition to that road menace, the bicycle. Drivers – meaning people in horse-drawn vehicles – said the infernal machines were spooking their horses. Pedestrians feared being mowed down by two-wheelers. In some places, bicycles were outlawed. In others, strict speed limits were enforced. The fact that nobody had a device for measuring the speed of a bicycle at that time was a moot point. Excessive speeds could earn you a fine.

As more and more working people (who couldn't afford horses) began using bicycles, things settled down. In 1887, the State of New York (USA) passed a law called 'An Act in Relation to the Use of Bicycles and Tricycles' which said, among other things, that bicycles were 'carriages' and had the same rights as Dobbin and his cart, so there. By 1968, the right of bicyclists to be on the road was enshrined in international law. The Vienna Convention of Road Traffic says bicycles are vehicles.

Progress: 1. Luddites who hate bone-shakers: 0. The bicycle proved to be a form of progress that was useful for the masses. Rather than holding people back, bicycles were helping. People stopped comparing them to horses, and started talking about sprockets.

Luddites and Their Wooden Shoes

Even before Baron Drais rode the first proto-bicycle, there were people in England who objected strongly to all this progress nonsense. They were called Luddites. This shadowy organisation was led by a figure called 'King Ludd', who was reputed to live in Sherwood Forest, the spiritual home of British resistance movements. Luddites smashed machinery because machinery was forcing people into new, unwanted forms of labour and taking away the livelihoods of the common man. (Sound familiar?) Historian Eric Hobsbawm calls this sort of behaviour 'collective bargaining by riot'.

It is therefore probably unfair to label any and all prosophobes as Luddites. They may not like your new app, but if they don't try to sabotage it, they aren't true Luddites.

Ah, sabotage is another word related to Luddites and prosophobia. Scholarly opinions differ as to the connection between sabots, or wooden shoes, and machine damage. Did the workers really throw their shoes into the machines to gum up the works? Whether this was the origin of the term or not, labour unionists throughout history, such as the International Workers of the World (or Wobblies), have advocated sabotage as a means of making it clear to management that change is not always a good thing – at least, it needs to take labour into account.

When progress is working for the people, the people are far less likely to throw shoes at it.

What Does This Have to Do with My Phone App?

If you are older than is fashionable – say, a Baby Boomer – you remember when the word 'computer' meant 'mysterious device that takes up a city block.' Our initial awe, wonder, and indeed fear of the computer's possible role in the New World Order can be summed up in one ominous name: HAL. The murderous machine from 2001: A Space Odyssey represented the uneasy feeling that these oversized adding machines might usurp our place in the cosmos by outthinking us at every turn. This fear was not based on experience – remember, in 1968, there were no personal computers. Not one single person had a PC. To use a computer, you had to be part of a special priesthood that knew the inside languages. You had to feed the gods with magnetic tape and punchcards.

Scroll forward a few decades, to the age of the internet. By the late 1990s, households everywhere in the developed world had access to information through their computer screens. No one feared, as early television users did, that the screens were watching them   – although, in a sense, they were, or at least, the senders of information were, since they knew the IP addresses. Surprisingly, perhaps, the world appeared ready, willing, and able to engage in ecommerce, elearning, and email.

The question, of course, was not, 'Do I want to buy books online?' but, 'What sort of virtual layout is most eye-catching?' Just as once, theatre translated to film and created a new visual language, so did the printed page give way to the webpage with all its works and fonts. We became readers again – but readers of interactive content. As time went on, our screens got bigger and our appetites larger, as our sentences became shorter.

Scroll forward another decade, into the 21st Century. The growing democratisation of information led to worldwide participation in the new Information Age. In developing countries, users simply skipped the old process of waiting until their governments could afford to install nationwide telephone grids. They bought mobile phones. They used handheld devices.

Do people in northern Africa fear electronic progress? Ask the former Egyptian government, deposed in 2011. At the height of the unrest in that country, mobile phones were shut down. Blackberry coups d'état, Twitter uprisings   – as long as the apps hold out, the revolution can go on. Once again, the question becomes not, 'Do I want this technology?' but 'What shape should my favourite interface be?'

Computer programmers know this. They rewrite and redesign their interfaces so that, as the devices get smaller, the screens remain user-friendly. Just as we adapt our language to the brave new world that is the internet (you knew what was meant by 'user-friendly'), so our eyes become accustomed to new formats, our fingers to new interfaces.

As logged-in users of the latest in technology, we are far from prosophobic. Still, we like our creature comforts. Study this page. Why does it look like that?

Why is the layout different from the classic formats you are used to? Because over the years, not only have screen sizes changed, but also the number of devices with screens. Our friends on the go are reading this page on hand-held devices, while we at home or office are using desktops. The variety of uses requires new strategies.

Why is it blue? Because blue is restful. Why does it feature the comforting image of a dolphin? For the same reason an early railway car was painted to look like a carriage. It isn't prosophobia to want to see something familiar on the road to progress.

1This railway car can be visited at the National Railway Museum in York.2This means, 'make haste slowly'. Time was, the reading public was expected to know these little 'Latin tags'. Why should you? Times change.