You can't talk about Dublin without quoting Oscar Wilde at some point. So, here goes:

''Life, Lady Stutfield, is simply a mauvais quart d'heure made up of exquisite moments.'' 1

However, the little group of h2g2 regulars that met in Dublin in July 2012 experienced only exquisite moments - no mauvais moments at all (let alone 15 of them!)

It all started when my husband and I (Trillian's Child) decided to come to Ireland for our holiday. I posted this in my journal and soon had volunteers offering to show us around and in the space of a few posts, we had the makings of an Irish-based H2G2 Meet. Yay!

Several other coincidences helped to swell our numbers:

Gnomon
, who lives in Dublin, has Wednesdays free and offered to be our Guide

Tavaron
from Vienna was staying with Malabarista in Northern Ireland at that time. Of course, no Irish meet would be complete without Beatrice, who turned up with Mala and Tav, but, sadly, King Bomba, whom I would have loved to have met, couldn't make it.

Because of the July 12th events, the Belfast contingent had days off that week, which made it easier for them to get away.

And most amazing coincidence of all: Z and Mrs Zen (Ben) were also in Ireland at the same time, due to hold a talk in Cork the following weekend.

Other researchers who live in or around Dublin came, too:

After a strenuous day sightseeing in Dublin and freshening up at our hotel, we walked along O'Connell Street to the pre-arranged meeting place of the Grand Central Bar. We were the first to arrive and to find out that, unfortunately, they didn't serve food after 7.30 pm. It was 8.20 pm and we were starving, so we wandered off to look for somewhere suitable to eat, texting Gnomon and TRiG furiously as we walked, to let them know that we'd left the Grand Central. Having been warned by our guide that morning to avoid Temple Bar because the

was overpriced and only tourists went there, we stayed North of the LIffey and found an Italian restaurant.

Not long after, we were joined by Gnomon, TRiG, Ben and Z, and enjoying a few glasses of

and some Italian cuisine. We enjoyed the wine very much, and asked for another bottle. But there was no more wine! At least, not the same kind. So we ordered a bottle of the more expensive Barolo - and it was very good - we were in luck!

On the way out of the restaurant, we passed the mural which dominates the little square in the Italian quarter - it is a reconstruction of da Vinci's last supper, using faces of people the artist picked out on the street. It's worth a look - you can speculate on the symbolism of the characters. This appears to be the official site.

Starting point was the West fountain at Stephen's Green. The day started rainy and miserable. We took the hop-on hop-off bus

as we hadn't done the part that went from our hotel to Stephen's Green, but we didn't get off anywhere. As soon as we crossed the bridge on to the green part of the Green, however, the sun came out well and truly - and stayed with us for the rest of the day.

Gnomon soon turned up, and Recumbentman not long after. Bea, Mala and Tav were on their way, as were Mr and Mrs Zen and TRiG. While we waited for them, Gnomon showed us a hidden statue of W B Yeats, sculpted by Henry Moore and mentioned in a footnote in his very detailed Dublin Statue Trail.

Suddenly everyone seemed to arrive at once, all from different directions. Our numbers were augmented even more by AyeBee, the Pirate Wench, who stayed with us until lunch time. So the 11 of us had a sort of vote and decided to start by visiting the Archaeology Museum, which contains the pre-Celtic gold and other treasures. It is housed in a magnificent building with marble floors and an impressive central domed foyer. There is so much to learn about Irish history - we furriners struggle with the concept of there being no Roman period (Mala, particularly, finds this strange from an architect's point of view). Exit, as always, through the gift shop, where Malabarista found a tiny trebuchet which kept us all amused for the rest of the day. She later found out you could also sharpen pencils with it - but catapulting little stones into the canal was much more fun!

We passed by the statue of Oscar Wilde, where the official group photo was taken. More on the statue in Gnomon's Dublin Statue Trail entry. 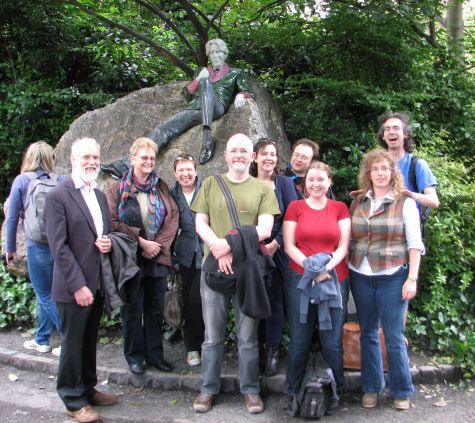 Further on through the park, we admired a bronze throne2 - there for all to sit on. Z climbed up on it and seemed to fit in it quite well!

We walked on down to the Grand Canal and balanced across the gates of a lock, to admire the statue of Queen Maedhbh. Gnomon told us the legend of this Queen, her spouse and the bull. On our way back, we crossed the Canal at a different point where we found the statue of Patrick Kavanagh. Bea did a rather good impression of him, sat on the bench next to him.

We felt we had done well and taken in quite a bit of the city by now, but before we could stop for a cuppa, we decided to have a look at the "Dead Zoo" - the Natural History museum, which is a Museum's Museum - with stuffed animals in Victorian vitrines and explanations partly on typewritten slips of paper. The old-fashioned displays didn't seem to bore the children who had been taken into the Museum by their parents - they were all quite fascinated. As we were - the range of fauna exhibited was amazing - TRiG fancied the

, Mala found a vampire antelope which gave rise to much speculation.

Now we really needed that cup of tea, and all squashed ourselves into a cafe. Around about this time, we were joined by Evenstar42. As we were divided between two tables, it would be difficult to report everything that went on in there.

Outside the cafe, Bea and the Zens left us to return to the Kilkenny design shop where we had eaten lunch, so they could have a more leisurely look at some of the lovely items. Recumbentman went to fetch his legendary recumbent bike. He demonstrated his starts and finishes and satisfied our curiosity on all sorts of related questions. Then Recumbentman cycled off into the sunset, leaving the rest of us standing on the corner....

Just at that moment, we were approached by a young man who was looking for passengers for his cycle-rickshaw. There were now 8 of us and there were 4 of these rickshaws, each taking 2 passengers. There seemed to be a drop of rain in the air, so, just for fun, we asked them to take us to St. Patrick's Cathedral. This was a part of the town that my husband and I hadn't managed to tick off yet, so we had a short look at the Cathedral, which was closed, but had lovely surrounding gardens, and from there, strolled through the Mediaeval part of the town to Christ Church Cathedral. We were passing through Viking country here, and slowly working our way back to the Liffey and Temple Bar.

Once in Temple Bar, we all parted company. Malabarista had a pedometer with her and when she checked it, we saw that we had walked nearly 12 km! It was still daylight - Gnomon had tickets for the theatre that evening, Mala and Tav had to catch the train back to Belfast, and everyone else was basically hungry and exhausted, but pleased with how the day had turned out.

Bea described the end of her day thus:

The Zens and I finally found a pub (a very nice porterhouse down by Trinity that had stout that wasn't Guinness!

) and remarked on what a remarkably sober meet it had been (well, until then.)

Mala and Tav joined me on the 1900 train, which unfortunately was disrupted due to disturbances at Lurgan. But we pooled all our edible resources and had a rather marvellous picnic of trail mix, roast broad beans, 9-seed bar, cheesy oatcakes and haribo bears. And we even out-weirded the Goth sitting next to us by using the little trebuchet and seeing what worked best as catapults - sunflower seeds or the heads of gummi bears. Home by 21.30 which wasn't bad, all considered.

Many thanks to Gnomon for general cat-herding, for guiding us round his home town and pointing out so many interesting and attractive sights and ensuring that we were looked after, fed, watered and amused.

Thank you so much Gnomon and Recumbentman - both repositories of a wonderful collection of local knowledge. And special thanks for showing me bits of Dublin I'd never seen before.