WB Yeats - Irish Writer Content from the guide to life, the universe and everything 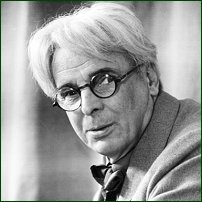 William Butler Yeats1 was an Irish poet and dramatist. His father and brother were well known painters, but he preferred literature and created numerous plays and poems during his life. His work was heavily influenced by the people around him, the occult and Irish fairytales. He set up the Abbey Theatre with help from Lady Gregory and Edward Martyn and, alongside JM Synge and Sean O'Casey, was a key figure in the revival of Irish literature.

William Butler Yeats was born to Protestant parents on 13 June, 1865, in Sandymount, County Dublin. His father was the portrait painter John Butler Yeats; his mother Susan Mary (née Pollexfen) was a descendant of a prosperous Anglo-Irish family who owned a milling and shipping business. In 1867, the family moved to London where he was educated at Godolphin School in Hammersmith, London.

Yeats's holidays were spent with his grandparents in Sligo2, where he learnt Irish fairytales and songs, and formed a belief in fairies. These things were later reflected in his poetry.

On returning home to Ireland in 1881 with his family, Yeats attended Erasmus Smith High School in Dublin. His father's studio was located close by, and Yeats would often visit his father at his studio and talk to the other painters and writers that visited. Then, in 1884, he enrolled at the Metropolitan School of Art in Dublin, despite his father's wishes for him to attend Trinity College like his ancestors. He was particularly interested in the work of the authors Samuel Ferguson and James Clarence Mangan. In 1885 he submitted an essay called 'The Poetry of Sir Samuel Ferguson' and his first poems to the Dublin University Review. That same year, he set up the Dublin Hermetic Order with his friends, including fellow poet, dramatist and painter George Russell3. On graduating from the Metropolitan School of Art in Dublin he returned to London to live with his family and became a professional writer. He joined the Theosophical Society4 and studied the work of William Blake. He met numerous artists and writers of the period in London, including George Bernard Shaw, William Morris, William Ernest Henley and Oscar Wilde.

My first meeting with Oscar Wilde was an astonishment. I never before heard a man talking with perfect sentences, as if he had written them all overnight with labour and yet all spontaneous.
- Yeats

In 1886 he released Mosada, A Dramatic Poem, and in 1889 The Wanderings of Oisin and Other Poems were published. Yeats soon became a member of the Rhymers' Club, and that same year met and fell in love with Maude Gonne, an actress and Irish revolutionary who later featured in many of his poems. The couple joined a magical society called the Hermetic Order of the Golden Dawn. Yeats also partook in the Irish nationalist cause and proposed three times to Gonne, but found his love for her unrequited. Other ladies to make Yeats's acquaintance were Olivia Shakspear with whom he had an affair until 1897, and Lady Augusta Gregory whom he stayed with in 1897 at Coole Park, County Galway. Coole Park inspired Yeats to write The Wild Swans at Coole (1917). The poem also related to his past relationship with Gonne and the deaths of Robert Gregory, Lady Gregory's son, and Mabel Beardsley.

I need a theatre. I believe myself to be a dramatist. I desire to show events and not merely tell of them...and I seem to myself most alive at the moment when a room full of people share the one lofty emotion.
- Yeats

In 1899 Yeats, Lady Gregory, Martyn and George Moore formed The Irish Literary Theatre, 'a small dingy and impecunious theatre' that became known as the Irish National Theatre Society, before changing its name in 1904 to the Abbey Theatre. Yeats wrote 26 plays for the theatre, including The Land of Heart's Desire (1894) and Cathleen ni Houlihan5. His last play was written days before his death and entitled The Death of Cuchulain. Yeats's plays experimented with folk, myths, modernism and when his secretary and fencing master, Ezra Pound, introduced him to Japanese Noh plays these influenced the creations of Four Plays for Dancers (1921) and At the Hawk's Well(1916). These plays later influenced other people such as Bertolt Brecht and Samuel Beckett.

Occasionally, Yeats took time off from the theatre to concentrate on his work and embark on lecture tours throughout America. He established the Cuala Press with his sisters in 1904. Inside the Cuala Press were numerous articles written by well known literary figures such as Ezra Pound, Elizabeth Bowen, Jack and John Yeats, and Patrick Kavanagh. In 1903 Yeats wrote No Second Troy reflecting on the fact that Gonne had married Major John MacBride6. The friendship between Gonne and Yeats continued, however, and one night in 1908 they slept together. Yeats was also affected by the civil war and the Easter Rising, which influenced him to write Easter 1916 and Meditations in Time of Civil War.

Now and in time to be,
Wherever green is worn,
Are changed, changed utterly,
A terrible beauty is born
- William Butler Yeats, 'Easter, 1916'

With the arrival of his poem Responsibilities in 1914 it was clear that Yeats had changed his style from mystical romance to talking about harsh reality and its flaws.

For everything that's lovely is/ But a brief, dreamy kind delight.
- Never Give All The Heart Yeats

After proposing to Maud Gonne three times, Yeats asked her daughter Iseult for her hand in marriage but she also rejected him. Then he turned his attention towards a 26-year-old medium called Georgie Hyde-Lees and she accepted his proposal. On 20 October, 1917, Yeats married Hyde-Lees. Together they had two children - Anne (born 1919) and Michael (born 22 August, 1921). Hyde-Lees was talented in automatic writing and used it to create poems with her husband. The poems they collaborated on were The Second Coming, A Prayer for my Daughter, Among School Children, Sailing to Byzantium, Byzantium, Under Ben Bulben, A Vision, The Winding Stair and The Tower. The Tower was his last poem and was inspired by a Norman stone tower near Coole Park called Thoor Ballylee that he bought as a family home.

I put The Tower and The Winding Stair into evidence to show that my poetry has gained in self-possession and power. I owe this change to an incredible experience.

Towards the end of his life, Yeats became a Senator of the Irish Free State and chaired the committee that designed the old Irish coins. He obtained honorary degrees from Queen's University College, Belfast and University College, Dublin and won a Nobel Prize for Literature. He created an organisation called the Irish Academy of Letters and from the late 1920s to his death spent winters in Italy and France due to ill health7.

Yeats died on 28 January, 1939 in Roquebrune-Cap-Martin, France. At first he lay buried there but in 1948 his body was exhumed and moved to Drumcliff churchyard, County Sligo, Ireland according to his wishes of lying 'under bare Ben Bulben's head in Drumcliff churchyard'. The epitaph on his gravestone reads:

Cast a cold eye on life, on death. Horseman, pass by.
- Yeats

1Yeats is pronounced to rhyme with 'gates.'2Sligo is in north-west Ireland3George Russell is otherwise known as AE.4A society which carried out studies of spiritualism.5Cathleen ni Houlihan translates to Caitlín Ní Uallacháin in Irish and means Kathleen, daughter of Houlihan. She was a mythical symbol of Irish nationalism and was used in works by Yeats, Sean O'Casey and James Joyce - all Irish writers of the same period.6MacBride, an Irish soldier, took part in the Easter Rising in 1916 and on being found a rebel was sentenced to death by the British government.7 Yeats was suffering from congestion of the lungs.