The 1916 Easter Rising Content from the guide to life, the universe and everything 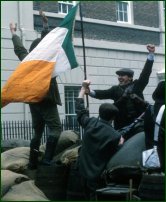 The Easter Rising took place on 24 April, 1916 in Dublin, Ireland. The Irish Republican Brotherhood (IRB) successfully incited a rising of about 1,600 rebels, which was quickly crushed by Crown forces. The handling of the rebels, however, created mass sympathy and the consequences of this rebellion are still felt in Irish and international politics.

This was a secret oath-bound organisation that would only be content with an armed struggle against the British forces. It was founded during the 1840s and had its roots in the American Fenian movements. During the 1850s it launched a bombing campaign in England. In 1867 it led a failed Irish uprising, but by 1916 the IRB had infiltrated several other Gaelic Revivalist organisations like the Gaelic Athletic Association (GAA), the Gaelic League, Cumann na mBan1 and the Irish Volunteer Forces (IVF); through these they recruited young men and women to join their cause. The IRB had faded away by 1922.

This body was formed to protect the indoctrination of Home Rule2 into Ireland in 1914, an event which never actually occurred, due to the interruption of the First World War. The IVF was formed in reaction to another organisation in Northern Ireland, the Ulster Volunteer Force, which swore to uphold the 'Union' with Britain and to never allow Home Rule in Ireland. The Royal Irish Constabulary turned a blind eye to the UVF's gun-running, so it was a very well-armed group. The UVF was a vastly Protestant organisation, reformed during the 'Troubles' and still present in Northern Ireland as the biggest Loyalist Paramilitary Organization. The IVF was created by Irish people who were dissatisfied when Home Rule did not arrive in 1914.

This was another militant republican faction, but one which leant more towards Marxism and socialism. It was founded during a 1913 lockout, in order to protect the trade unionists. Its founder and leader was James Connolly, who also founded the first Irish trade union and co-founded, with 'Big Jim' James Larkin, the Irish Labour Party. He was still viewed by many working-class people with equal amounts of suspicion and admiration. The Citizen Army never matched the IVF in numbers3 but it still formed a core part of the rising. The ICA and the IVF became collectively known as the Irish Republican Army, or IRA.

Although Sinn Féin took no part in the 1916 rising they became associated with it because newspapers, magazines and even the British government referred to the rising as the 'Sinn Féin Rising.' Its leader Arthur Griffith was thrown in jail for suspected involvement.

The British army did not have a large presence in Dublin at the time. Quite a few of the 20,000 soldiers involved in the crushing of the rebellion were Irishmen. For this reason, and because of the widespread destruction of property, the rebels were at first hated by the ordinary Irish person.

In 1915 the IRB set up a Military Council to draw up plans for a rebellion using the IVF. The council included Thomas Clarke, Seán MacDiarmada, Thomas McDonagh, Joseph Mary Plunkett, Eamonn Ceannt and Pádraig Pearse. One noticeable absent person was the commander-in-chief and founder of the IVF, Eoin MacNeill — the IRB knew that he would never allow an all-out rebellion.

In January of 1916, the IRB learned that James Connolly was beginning to plan a rebellion of his own with The Irish Citizen Army. They 'kidnapped' him and asked him to join their rebellion. Understandably, he did. The IRB had managed to get Germany to pledge 20,000 rifles and bullets for the rebellion, to be landed at Inch Strand in County Kerry one week prior to the rebellion.

On Wednesday of Holy Week, the IRB forged a letter from Dublin Castle, the British administrative building in Ireland. Known as the 'Castle Document', apparently ordering the execution of Eoin MacNeill, it was shown to MacNeill. He then was very easily persuaded to give an order to the IVF 'to resist any British action.' This was the order that the IRB needed to go ahead with the rebellion. The rebellion was to take place on Sunday, 23 April.

Meanwhile, the ship transporting the German guns, the Aud, was intercepted by the Royal Navy. Captain Karl Spindler scuttled the ship. The 20,000 rifles and their bullets were lost and the rebellion had no chance of succeeding.

On Holy Thursday things went from bad to worse: MacNeill found out that the 'Castle Document' was a fake. He put an advertisement in the Irish Independent newspaper which told all IVF members that 'No parades, marches or other movements of the volunteers will take place.' This cancellation caused the IRB to move back the rebellion one day to Easter Monday — 24 April, 1916. This caused many rural volunteers, who had come to town on Sunday only to hear the rebellion was cancelled, to return home. Although all the leaders now realised that they were going to die, they still went ahead with the plans for rebellion so that it 'may inspire future generations.'

On Easter Monday (24 April, 1916) 1,600 IVF and Citizen Army personnel took over several key buildings in Dublin. The plan was simple: hold off the British for as long as possible. The buildings they took over included the Four Courts, Bolands Mills, Jacobs Biscuit Factory, the Royal College of Surgeons, the Mendicity Institute and most famously the General Post Office4.

Pearse and Connolly read out 'The Proclamation of The Republic' on the steps of the GPO to a small crowd of bemused Dubliners.

'In the name of God and of the dead generations... Ireland, through us, summons her children to her flag and strikes for freedom... supported by her exiled children in America and by gallant allies in Europe...she strikes in full confidence of victory'
—from 'The Proclamation of the Republic'

The tricolour flag was raised over the GPO - the rising had begun. Incidentally, opting for the tricolour had been a controversial move. Some IVF members wanted the old 1798 United Irishmen Rebellion flag reinstated (a golden harp on a green field). It was decided that the Green, White and Orange5 better represented the ideals of the Protestant leader of the 1798 rebellion, Wolfe Tone. Green for Catholics and republicans, white for peace and orange for unionists and Protestants.

The British government in Ireland was shocked by the rebellion. The capture of the Aud and the cancellation order of MacNeill's had sent them into false sense of security. More than that, there were only 2,000 soldiers in the Dublin area. Quickly, vicious street battles occurred on the streets of Dublin. Often these were viewed as a kind of spectator sport by the public, who would applaud at a particularly good shot or boo at bad tactics. One of the most famous tales is of nine volunteers holding off three battalions of British troops on Northumberland Road, while being applauded by spectators. Within two days there were 20,000 British soldiers in Dublin. A lot of them were Irish, and some even former volunteers. A gun boat, Helga, was sailed up the Liffey and had started to shell rebel positions. Most of the centre of Dublin was ruined, especially around the Sackville Street area6.

On the Thursday the GPO was evacuated, as the roof had caught fire due to incendiary shells. Seeing the terrible devastation, Pearse soon ordered the surrender of the IVF and Citizen Army. A young Cumman Na mBan woman was given Pearse's sword, a white flag and a bike and was told to tell the IVF and Citizen Army rebels of the surrender. By Saturday the Rising was over.

British Army Commander General Maxwell, obviously feeling betrayed by this act of treason in the 'Home Isles,' was determined to show the rebels no mercy. Military courts were opened and men and women were sentenced to death.

The executions began with:

75 others were sentenced to death. Other death sentences were remanded to imprisonment. Countess Markievicz7 and Eamonn De Valera were acquitted of their death sentences: Markievicz because she was married to a Polish count, De Valera because he had an American passport.

To begin with, the vast majority of Irish people hated the rebels, but opinion changed very rapidly soon afterwards for a number of reasons:

The rising inspired a whole new generation of republicans. The likes of Michael Collins, who were junior officers in 1916, soon became the leaders of the War of Independence. Sinn Féin grew greatly in popularity — in contrast, the Home Rule party lost most of its seats in subsequent elections.

Now and in time to be,
Wherever green is worn,
Are changed, changed utterly,
A terrible beauty is born
—William Butler Yeats, 'Easter, 1916'

1This would later become the female wing of the IRA2Home Rule was a bill which would give limited freedom to Ireland. It would have installed a government in Dublin in which all the civil matters of the state could be decided upon except defence and foreign affairs.3IVF had 150,000 at its peak although most of these had enlisted with British army after the Home Rule party leader, John Redmond, told them to 'Join the cause of small countries.' Roughly 11,000 IVF were left by 1916.4Bullet holes can still be seen on the walls of the GPO.5Not Gold, as some would say.6Now known as O'Connell Street.7The first female elected to a Parliament and Minister for Labour in the first Irish Parliament.