Having given up a bike of my own last year, this year, I'm back to being on the back. I think bikers themselves make the worst pillion passengers, and I found as I looked over Dai's shoulder that all I could see was hazard after hazard.

Dai and I have differing approaches to heading off on a trip: I'll usually have a spreadsheet prepared at least a week in advance with all the details of where and when we're going, and a selection of clothes and items to pack laid out on the spare bed, which I methodically remove items from until the pile will fit in the available space. On a big bike carrying two people, that space is about the size of a shoebox. Dai will have a plethora of things to do the day before we go, with a list contained only within his head. To be fair, everything gets done, but without time to take anything for a test run. In this case, we were setting off with new supposedly comfy seating, new blue tooth headsets, and new boots for him.

The Friday morning start was an early one, and we left Lisburn around 6 am to catch the boat to Scotland. At about 6.01 we turned back as Dai decided the boots wouldn't do, and changed to a different pair.

The ferry crossing was smooth and calm, and we made good progress on the other side of the Irish Sea, stopping just north of Glasgow for lunch. By this stage I realised that the new improved seating was very far from comfortable indeed, and I winced in the knowledge that 10 days of wriggling lay ahead of me. We found a Dobbie's Garden Centre and were keen to compare it to the new one that has just opened across the road from our house, and which is one of our favourite places to pop into just before closing time, as they do some serious mark-downs on their seriously good cheese counter. Sadly, the Cumbernauld branch was much smaller, with a limited selection of cafe dishes on offer, and even then the waitress managed to get our order wrong.

We ploughed on in the sunshine, reaching our destination up in the Grampians in late afternoon. It was the first time we'd ever seen Glen Clova in the sunshine, and a very fine sight it was too. We caught up with old friends over a drink or two, and were entertained by a flock of swallows swooping in and out of nests they had built in the eaves of the old hotel building. The food was excellent, and I can heartily recommend the venison casserole followed by sticky toffee pudding. Yum!

Saturday was slightly damper, but we decided to venture out for a short trip to an unsual winery called
Cairn o'Mohr
(geddit?). Grapes don't grow in Scotland, obviously, but this place made wine from fruits and leaves, and had an endearing self-deprecating sense of humour evident in its leaflet. Our journey there wasn't helped by Dai's insistence on following every instruction given by the sat-nav, so that when it said turn left (even though the road-sign says turn right for Dundee, and even though the road on the left is marked as a cul-de-sac and quite obviously leads down to some residential housing), left we turned. A heavy bike, slow speeds and wet roads aren't the most ideal conditions for making a U-turn, and my mood wasn't improved when we continued past the exit to the winery, stopping at a road 10 miles further on, because Someone had put the wrong road number into the sat-nav. Yes, we got there in the end, but an extra 20 miles that you didn't have to spend on a seat like a postage stamp with a ridge across it is not easy to disregard. We were still learning how to use those blue-tooth headsets, so he hadn't been able to hear me for most of the journey, which was probably just as well! 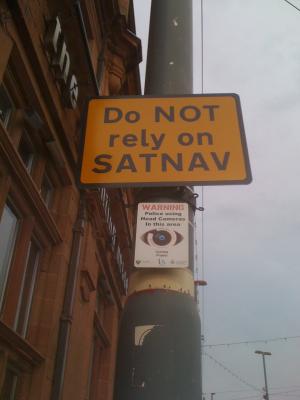 The winery itself is quirky, fun, unique and an absolute find! We tasted some sparkly stuff made from and tasting of real strawberries, some cider that was like biting into a Braeburn, a red called 'Gangs wi haggis', and my own favourite, a dry-ish white made from autumn oak leaves. The store offered discount for buying six bottles, so six we bought, before thinking, how the f are we going to carry so many bottles of wine on an already well-loaded bike! But bless those capacious paniers, space we found, and managed to drink or give away all of the bottles during the week.

On Sunday we headed south towards Berwick-upon-Tweed. This border town has switched between being Scottish and English an astonishing 14 times, and has some impressive walls dating back to Elizabeth 1 and Cromwell. It was a favourite spot of painter L S Lowry, and some of his paintings show scenes in the town. It also has its own sweeties, the Berwick cockle, a sort of striped nugget of peppermint candy. Sadly, the bag I'd procured to take back to my office co-workers were mysteriously consumed one evening. We were staying in a charming BnB run by an eccentric lady called Margaret, who cycled round the garden in the shadow of the stunning railway viaduct. She did make the most fantastic bread, though.

I was using this trip to visit a few places where I'd never been, and which I'd felt left a gap in my cultural experience that needed adressing. Berwick was one, and next on the list was Hadrian's Wall. It took me a bit of map-reading to suss out that although that was previously the divide between England and Scotland, it is actually situated well south of today's border. I wondered if I'd notice the moment when we crossed between the two countries, but the road we chose had a large tourist view-point area marking the crossing, complete with huge stones conveniently marked 'Scotland' on one side, and 'England' on the other, as well as essential facilities like a coffee van and a real live piper selling copies of his CD (free baseball cap included).

I'd earlier asked a local biker for directions to the best viewing point for the wall, and so I was entrusted with giving directions (take that, Sat-Nav!) Which I did. But the road this took us down was very twisty, and also was exposed to some really strong gusts of wind, which had me pondering over the vagaries of the English langauge where a journey could be both windy and windy. The wall wasn't what I expected: to visit the ruins of various forts and garrisons requires a bit of a walk (and also parting with some cash), neither of which I was willing to do in biking gear. So maybe I'll explore that one a bit more next time.

We crossed the north of England to the border town on the western coast, Gretna. Years ago, the age of consent for marriage was lower in Scotland than it was in England, so many couples eloped to get married in the blacksmiths here, the first town north of the border. It's a big tourist draw, and the visitors' centre was full of coachloads of Japanese photographing each other. But there's not much in the way of night life, so we headed back into England and spent the night in Carlisle, one of the main defence towns on Hadrian's Wall.

Carlisle has the usual mix of high street shops, a pet shop that advertises 'we buy and sell ferrets!'1 and a very fine old cathedral. We were lucky enough that the organist was practising as we strolled under its high ceilings, admired the stained glass windows, and read about the Beckett sword: after the murder of Thomas Beckett, one of the four swords used was given into the charge of Carlisle cathedral.

Next on my list of 'How come I've never been there?' was Blackpool. It's constantly having to modify itself to appeal to new visitors, and is currently undergoing some major upgrades to its promenade, resulting in serious roadworks and diversions. And, to my delight, many signs around the place saying 'Do not rely on Sat-Nav!' The weather was gloriously warm and sunny as we strolled on North pier, admiring the miles and miles of golden sand and the sparkling sea. We visited the Blackpool Pleasure Beach amusement park, as I'm a bit of a roller coaster fan, so I had to try the Pepsi Max, tallest coaster in the UK. My favourite ride was Infusion, a suspended coaster with some heart-stopping corkscrews and cobra rolls, and we finished the day being well and truly soaked on Valhalla, a fire and ice themed log flume. Being an old seaside resort, Blackpool has many stalls offering seafood such as cockles, mussles, whelks, amd oysters. And where there are oysters, there is champagne. So our lunch was an incongruously glamorous glass of bubbly along with a plate of prawns and melon.

There is much snobbishness about Blackpool, and it now relies on stag and hen weekends for most of its tourism, so at times and in places it can get very boisterous. But I loved the place, and didn't get to do half the things I wanted to, so I'll be back some time to see the illuminations, climb the tower, and of course waltz across the famous ballroom floor.

Tune in next week for further adventures!