So what did we do then?

N.B. this is not a rhetorical question, at least for me...

Saturday dawned sunny and clear, and Edinburgh looked lovely in the sunshine. Little did it know what was about to hit it. Acting as I was in the capacity of hootoo beacon, I felt it was my duty to get to the pub first. So, after a fortuitous set of train connections, I arrived at the Standing Order just after noon, and got in some breakfast (i.e. the first pint). In a flash of forward planning I also got some food as well. If I'd been able to see ahead a bit further I'd have got triple portions...

Round about half twelve Dr Gonzo, Fords_Prefect and Zagreb arrived, followed by various others. Time passed (*glug*) until Lost in Scotland found us at about 3:45. We left the pub about fourish, and decided to go to Princess Street gardens, as they were closer than the Meadows. Ah well, we kept to the plan for at least three hours, which ain't bad for one of mine... 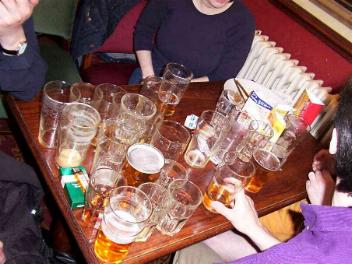 We arrived at Princess Street gardens, only to be told by the parkie that ball games were not allowed. Getting completely sloshed was OK though*, so out came the vodka.

Somehow found self in pub again (The Holyrood Tavern). May have drunk stuff. At some point Wumbeevil had to leave (after his food left him the wrong way) and was taken down to the station by DG. Due to a unfortunate combination of factors (being drunk, drunk and very drunk indeed) DG got the trains to Glasgow and Newcastle mixed up, with, as they say, hilarious results. And if you happen to live in Newcastle, we're sorry, it won't happen again. We hope. Nothing much damaged? Phew...

It is now Thursday. I have almost recovered. The scars seem to be healing nicely. I think I'll stay off drink for the next few months.

On a personal note, thanks for the floor space, Fords