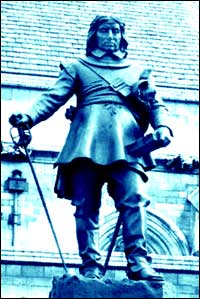 I'm currently working on turning this into a usable Entry, just need to gather information and extract any good stuff from the conversations below
Mr. Dreadful

Oliver Cromwell was born in Huntingdon on 25 April 1599.

Cromwell married Elizabeth Bourchier1 on 22 August 1620. Together they had nine children, five sons and four daughters.

...during his time in London Cromwell never forgot his family and frequently wrote love letters to his wife back in Huntingdon.

In 1628 Cromwell became Member of Parliament for Huntingdon and during the period from 1628 to 16292 made controvserial speeches including the defence of a pamphlet which advocated giving the vote to all men and also asking that The Fens3 be drained, improved and defended from unscrupuous landowners who wanted to drive the residents off the land.

In 1640 Cromwell was again elected MP for Huntingdon for the first Parliament Charles I had called for 11 years, and supported the various reforms proposed including that Parliament be convened at least once a year. He also opposed the King's desire to raise taxes4 and, along with several other MPs, demanded that the King consult with Parliament on all issues of government

'This Warr Without an Enemie'

The English Civil Wars, also known as the Wars of the Three Kingdoms5, are what Cromwell is best remembered for. From 1642 to 1651 the country was embroiled in a series of wars between Parliament and the Crown which Parliament eventually won.

The first war officially began on 23 October 1642 at Edgehill and carried on until 1647 when the Royalist garrison ant Harlech finally surrendered. It was during this that the (in)famous New Model Army was set up, with Cromwell as second-in-command, and the King was first kidnapped by the Parliamentarian army.

The second, and shortest, civil war lasted from spring to late summer in 1648, the events of that year would lead to the execution of Charles I in 1649.

The third and final war lasted from 1650 to 1651, during which time Charles II was crowned in Edinburgh and the Scots Royalists attempted to invade England.

Whatever people think about Cromwell there is one thing we can all agree on; he was not a proud man. In an age when the fashion among portrait painters was to accentuate a person's best features while playing down or eliminating the bad things, thus creating a highly-romanticised image of the subject, Cromwell insisted that he be painted "warts and all, with none of the blemishes or shortcomings concealed". Because of this it is likely that Cromwell's portraits are the only reliable likenesses we have of anybody from that period.

The Man Who Would Not be King

Contrary to popular belief Cromwell did not specifically set out to become a dictator, nor did he fully become dictator after the execution of Charles I. In 1653, after the disintergration of the Barebones Parliament, he was appointed Lord Protector of the Commonwealth; a post which many believe gave him supreme power over all of the United Kingdom, but in fact meant he shared power with Parliament and the Council of the State. It is now believed that many of the acts which Cromwell is so reviled for were actually only ordered under pressure from Parliament.

Cromwell himself had no problem with there being a monarchy, and in 1651 had discussed the possibility of restoring the House of Stuart through one of Charles' sons. Instead, Parliament offered Cromwell the crown in 1657 but he refused it, records on why he did this are sketchy at best, some say it was pressure from the army which led to his refusal while others say it was his own personal honour.

Another misconception about Cromwell is his attitudes to religion. Cromwell himself was a Puritan, but compared to the rest of this notoriously dour sect he was a screaming liberal. In fact he was fond of drinking, gambling and hunting, many people see this as decadent hypocrisy but for all these earthly pleasures Cromwell was sure of this: God comes first above all things. Cromwell was one of the first statesmen to advocate religious freedom, since the death of Henry VIII there had been bitter squabbles between the Catholics and Protestants but Cromwell beleived that all should be free to worship how they wished but despite this Catholics continued to be prosecuted with the blessing of The Protectorate. However, it was The Protectorate that allowed Jews to live legally in England for the first time since (date), an act of tolerance that was almost unprecedented in Western Europe at the time.

Cromwell's campaign in Ireland, and the atrocities that were committed there, have been hugely exaggerated. While in Ireland Cromwell besieged 28 towns and fortresses; only a few resisted, and there were massacres at only two: Drogheda and Wexford.

Drogheda was a typical example of 17th Century warfare, Cromwell sent a letter to the town’s governor* asking for his surrender, the governor refused and under the contemporary rules of engagement such a refusal essentially forfeited the lives of all who defended the town. The siege began on 11 September 1649 and after two failed attempts the New Model Army eventually broke through the Irish defences and chased down any they found who bore arms against them.

Cromwell himself denied that his soldiers killed any civilians, concentrating only on those who were armed, and few modern studies support the argument that Drogheda was in any way cruel and unusual for the time.

To put it simply Wexford was an accident. After a short siege Cromwell began discussing terms with the garrison commander, David Sinnott. During these negotiations the captain of Wexford castle suddenly and unexpectedly surrendered and upon hearing this one of Cromwell's subordinates launched an assault without orders. The massacres themselves began after the Parliamentarian troops claimed to have discovered evidence of Catholic atrocities. The later clearances under the so-called 'Cromwellian Settlement of Ireland' probably had nothing to do with him - he was out of favour with the English Government at the time - and he later sent his son Henry to try to mitigate the effects.

Cromwell died in September 1658 following several bouts of an unknown illness6 and was subsequently enbalmed and laid out in Somerset House. Unfortunately the embalming was less than successful and his body started to decompose. When the smell finally became unbearable Cromwell was given a full state funeral and interred at Westminster7. His son, Robert, was appointed Lord Protector in his place but within two years Parliament had collapsed and the monarchy restored. Cromwell's body was exhumed on the order of Charles II and symbolically hung in a gibbet at Tyburn. Although there has been much speculation Cromwell's final resting place is unknown.

Cromwell in the 21st Century

Even though the English Civil War is barely touched upon in schools8 nearly everybody in the UK has heard of Cromwell, even if they don't consciously know it. Only Queen Victoria has had more streets in Britain named after her, and – as explained above – the phrase "warts and all" originated with Cromwell. The New Model Army which was originally set up as an exercise in centralising as much of the armed forces as possible under a single commander (rather than there being several armies each commanded by separate people and united only by a common cause) paved the way for the way the modern British Army is organised.

1Daughter of Sir James Bourchier.2When Charles I dissolved Parliament.3Flat marshland encompassing parts of Cambridgeshire, Lincolnshire and Norfolk4With which Charles intended to fund the Bishop's War against Scotland.5England, Scotland and Ireland.6Not that this prevents speculation, everything from kidney stones to poisoning has been suggested over the years.7The exact location is unknown but some sources say it was near the tomb of Henry VIII.8Even though it indirectly shaped England as it is today the Civil War is regarded as a 'bad' part of English history.