Croydon Tramlink, London, UK Content from the guide to life, the universe and everything 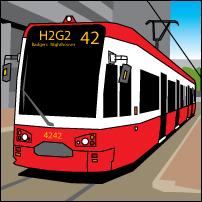 Up until the end of the 20th Century, the Croydon area suffered from a serious lack of public transport. Traffic jams were a fact of life, the London Underground was nowhere to be seen, and the complex spaghetti-like layout of the local railway lines meant that simple journeys around the area were just not possible. Meanwhile, growing areas like New Addington were stifled by equally poor facilities. These problems were finally solved in May 2000 with the opening of the Croydon Tramlink, a 15-mile (28km) modern light railway linking the local stations to the heavily-populated areas.

The Croydon Tramlink consists of a line from Wimbledon to Croydon, a clockwise loop serving various parts of Croydon, and an eastern section with branch lines running off towards Beckenham Junction, Elmers End and New Addington. The former and latter branches split just after Sandilands station, while the Elmers End branch leaves the Beckenham Junction line just after Arena. Three services are currently run:

Services 1 and 2 each run about six trams per hour during weekdays and four per hour at weekends, while Service 3 tends to run half as many. The loop around Croydon and the line to Sandilands station are the busiest parts of the system, as all three services run along these lines. Since not all possible routes are served, there is no charge for changing trams to reach your destination. Each tram can hold 70 passengers and has room for two wheelchairs.

The Tramlink runs partly along the courses of old mainline suburban services which were closed and taken over in 1997. Two of these were the Wimbledon & Croydon Railway, which opened in 1855 between Wimbledon and West Croydon, and the Woodside & South Croydon Railway, which was taken over both between Woodside and Sandilands, and between Sandilands and Lloyd Park, where it runs through a pair of tunnels. It is interesting to note that part of the Wimbledon & Croydon Railway was previously the Surrey Iron Railway, a horse-drawn goods tramway opened in 1803, making it one of the oldest railways in the world. This has allowed the Croydon Tramlink to lay claim to being the world's oldest tram system.

The tram also made use of the line between Addiscombe and Elmers End, which opened in 1864 as a branch of the 'Mid-Kent' railway. The abandoned station buildings at Woodside can still be seen, while the station at Addiscombe was replaced by a new tram stop further to the south of the original. The tram route also took over one of the tracks of the mainline between Birkbeck and Beckenham Junction, and trams run parallel with Eurostar trains near the latter station.

The Tramlink was first put forward to parliament in 1991, and received Royal Assent in 1994. Construction began in 1997 and was completed three years later, allowing the running of the first trams in Croydon since 1951. At first, the tram system was introduced on a 'test' basis so that locals could become accustomed to their presence. The only warning that a tram is coming is a quiet 'shooshing' noise, and the proper opening of the system was delayed when someone stepped in front of a tram.

Although the tram route consists mainly of abandoned and converted railway lines, about five miles (8km) of the route runs along newly-built alignments, and for another two miles (3km) it shares sections of roads with other traffic. The trams also pass along bus-only routes in central Croydon where the area is heavily pedestrianised. The line also varies between single and double tracks, and even contains a section of gauntlet track where a pair of tracks are forced to run in the same space due to an obstruction of the disused cutting they took over. A similar section of interlaced track is used near Church Street station so that the points for a junction are further from the busy main road.

Most platforms are at the same height as the trams' floors, although the original mainline platforms are retained at Wimbledon and Elmers End. All stations are at ground level, and the route between platforms is often via a pedestrian level crossing over the tracks. Unlike the Docklands Light Railway, the tram does not make use of an electrified third rail, but instead uses the more traditional system of overhead power lines. 750 volts are delivered through the overhead wire, but return through the tracks. The trams are driven manually and feature the 'dead man's handle'1 used on tube trains, and so the system only has signals at junctions where there might be conflict between trams from different routes. Stations are generally unmanned, and although automatic machines provide tickets, Oyster cards2 can be used, and should be touched on a reader on the platform before boarding.

At the moment, Tramlink only connects with the London Underground at its eastern terminus in Wimbledon where passengers can change for the District line. However, the Morden Road stop is a short walk south from South Wimbledon tube station on the Northern line, and another link will soon be provided when the East London line is extended to reach West Croydon. Meanwhile, the system has interchanges with mainline stations at Wimbledon, Mitcham Junction, West Croydon, East Croydon, Elmers End, Birkbeck and Beckenham Junction. There are also many opportunities along the routes to change for bus services.

1This must be held in position for the tram to operate, and will spring out of position and stop the tram if released.2These are electronic tickets which can be used as a pay-as-you-go card or have various types of ticket added to them.