London Underground - East London Line Content from the guide to life, the universe and everything 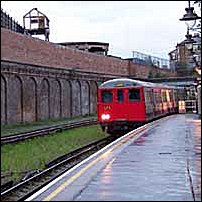 The railway was extended further northwards in 1876 to reach the Great Eastern Railway lines at Shoreditch, and this tie-in allowed trains to pass from the south onto the East London Railway, and then run straight into Liverpool Street station. A regular service would run from New Cross Gate to Liverpool Street until the line was electrified in 1913, meaning that only non-Underground trains could then continue on into the mainline station. The point at which the line was severed in 1966 to improve running on other lines into Liverpool Street can be seen from Shoreditch station.

As part of the plans for the construction of a London Overground network, work began to extend the East London Line to both the north and south, with the finished product becoming part of the new system and losing its London Underground status. The finalised plan consists of two phases, with the stage one to be completed by 2010. This involves the building of an extension to Dalston Junction from Whitechapel, with new stations being built at Shoreditch High Street, Hoxton, Haggerston and Dalston Junction. At the same time, the line will be extended from New Cross Gate onto the mainline tracks, allowing trains to serve all the stations between New Cross Gate and Croydon, as well as serving the branch off to Crystal Palace. These extensions will then be supplemented by an additional extension onto South London Line mainline tracks from Surrey Quays towards Clapham Junction, with a new station being built at Surrey Canal Road next to the ground of Millwall FC.

This station is now disused - see Abandoned Lines and Stations for more information.

This station lies opposite the Royal London Hospital, and a street market lies just outside the station. The two 1876 East London line platforms are underneath and perpendicular to the four 1884 District and Hammersmith & City line platforms, although both lines lie in cuttings just beneath the surface. Some of the signs on the platforms are quite old, as is quite common in stations on the District Line - the station still features black boxes that light up to tell you which platform the next train will arrive on. This station acts as the terminus of the line except for peak hours when trains run north on the single line towards Shoreditch. During the late 19th Century, Whitechapel was infamous as one of the Jack the Ripper's favourite haunts, and later became an area frequented by the Kray brothers. The station is a short way east of the famous Brick Lane, which features Indian restaurants, clubs and a market, although Aldgate and Aldgate East stations are both much closer.

Built in 1876, this station is not actually connected to the Docklands Light Railway station of the same name, but passengers need only to walk round to the next street about 50 metres away, and there is a rather good pie & mash shop on the way. The tube platforms are only accessible by lift, and both stations are pretty much devoid of amenities. The surrounding area is mainly residential, although there is a market on nearby Watney Street.

Built in 1869, this station lies on Wapping High Street just north of the entrance to Brunel's foot tunnel through which the East London line runs. There is therefore little room available for platform expansion, and so the station's future became uncertain when the East London line extension was announced. However, it has now been decided that the extended line will be served by four-carriage trains, and so the station will be able to remain open to serve the surrounding residential area. Wapping became well-known in 1986 as the site of the battle between Rupert Murdoch and the printer's unions, as it was the location of the so-called 'Fortress Wapping'.

From the same era as Wapping station, Rotherhithe lies just to the south of Brunel's tunnel just off the aptly-named Brunel Road, and as with Wapping the station's future was uncertain for a while due to the short length of its platforms. The original brickwork of the Thames Tunnel can be seen from the north end of the station, and those with some time to spare can visit the nearby Brunel Engine House museum on Railway Avenue. The surrounding area boasts a colourful history of body snatching, piracy and maritime tradition, with the Mayflower having set sail from Rotherhithe in 1620 on its way to North America.

This comparatively new station is named after the nearby Canada Water reservoir, and was built in 1999 to serve as an interchange between the East London line and the Jubilee line extension. The station's surface building consists of a large glass drum, similar to one you might find in a top-loading washing machine, and a glass-roofed bus station which serves the local area. The underground part of the station consists of a large number of concrete struts, and was built to support the weight of possible future developments above ground.

Originally known as Deptford Road when it opened in 1869, this station lies in the middle of a large junction just off Lower Road, just to the east of Southwark Park. The station was renamed Surray Docks in 1911, but was given its current name in 1989 when the Surrey Quays Shopping Centre opened nearby. The station was originally built due to the presence of the highly popular Surrey Commercial Docks, but since the redevelopment of the Docklands in the late 20th Century, Surrey Quays has been a mixed residential and commercial area, thus providing a sufficient demand for the tube station to remain.

South of this station the line surfaces and then bifurcates into two lines leading to the southern termini at New Cross and New Cross Gate. After the East London line extension has been completed the line will split into three here instead, with a third branch heading off to a new station at Surrey Canal Road.

This station lies on New Cross Road about 600m to the east of New Cross Gate station, and forms the only terminus of the East London line not scheduled for extension. The tube station was built in 1880 at the same time as the mainline station of the same name, which is served by South Eastern trains from Charing Cross via Waterloo East as well as those from Blackfriars and Cannon Street, with all trains to New Cross passing through London Bridge station to the north.

Situated on Goodwood Road just 600m west of New Cross, this station opened in 1869 and is currently a single platform terminus of the East London Line. The station also has four national rail platforms which are served by Southern railway trains running from Charing Cross, via Waterloo East and London Bridge stations, to Caterham and West Croydon in the south, and to Victoria via Clapham Junction. By approximately 2010, New Cross Gate will no longer be a terminus, and instead the Underground trains will switch onto these national rail lines and continue through to the mainline stations all the way to Crystal Palace and West Croydon.

The station was originally known as New Cross, but due to possible confusion with the nearby South Eastern railway station, the suffix 'Gate' was added and has remained to this day. New Cross Gate station is near to Goldsmith's College, part of the University of London, and so the station may often be full of students.

1Plans to extend the line have now led to the closing of Shoreditch station - see below for more details.